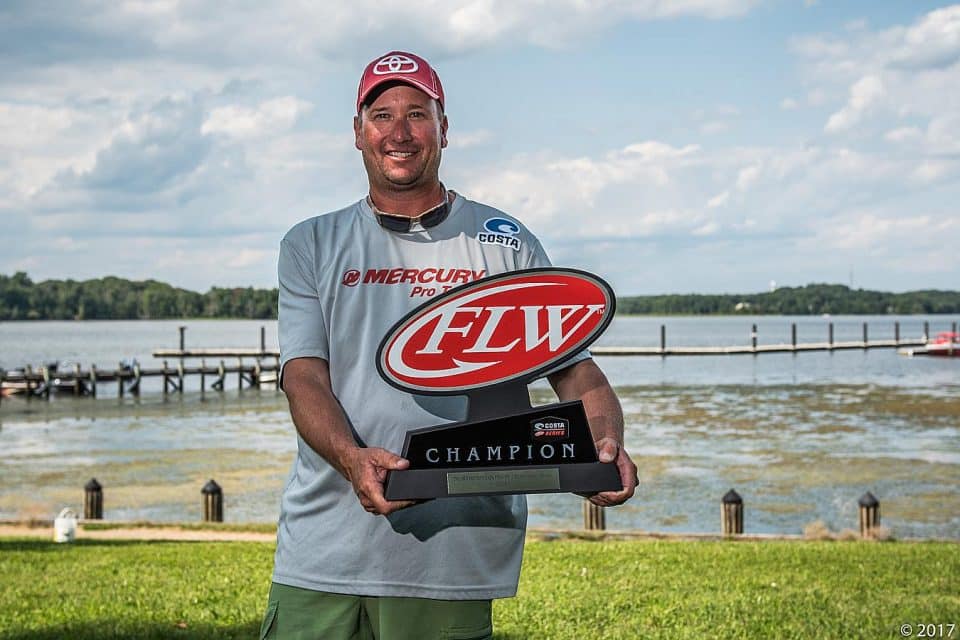 “I’ve had a lot of top-10 finishes in past FLW events on the Potomac River, but never a win,” said Hicks, who earned his first career-victory as a boater in FLW Series competition. “I told my wife that I didn’t want to make the top 10 again – I wanted to win. I went out there, swung for the fences and it paid off.”

Hicks said he spent his mornings in Aquia Creek, picking apart grass beds with offshore milfoil clumps. He said he worked through a couple of community holes each day before moving on to different areas.

“I don’t normally fish community holes, but they produced a couple of good bites for me this week,” said Hicks. “The bigger fish were relating to the outermost clumps, and I weighed in three on Day One using a black Lobina Rio Rico topwater bait. I then ran to some wood and lily pads in Aquia and Potomac Creeks and filled out my limit.”

On Day Two, Hicks said he managed to catch another three keepers from the milfoil clumps on the Rio Rico, but wasn’t able to fill out a limit at his secondary areas. He said he decided to make a run to an area 25 miles north, near Pohick Bay, around 1:30 p.m. There, Hicks said he used a Team Daiwa TD Pencil topwater bait to complete his limit.

“I caught three in the back of a grass flat where the wind had blown out sediment and created a ditch,” said Hicks. “The sandy bottom was key. I think it was a good place for fish to ambush food.”

On Day Three, Hicks once again worked through his milfoil clumps, but couldn’t get anything to bite his Rio Rico.

“I noticed other anglers were catching them on swim jigs, so I picked up a 3/8-ounce bluegill-colored (Lil’ Hustler) swim jig with a Dirty Sanchez-colored (Reaction Innovations) Skinny Dipper and caught two of my biggest of the day,” said Hicks.

Hicks capitalized on his big bites and caught another three using the TD Pencil. He noted that his later catches on Day Three came from clearer water.

“When the water clears up, I think the Rio Rico is too big and makes too much noise,” said Hicks. “I’d call the TD Pencil more of a finesse-style topwater bait. I caught my last fish around 1:30 (p.m.) and that’s what I brought in.”

The top 10 pros on the Potomac River finished:

A complete list of results is available at FLWFishing.com.

Tim Dube of Nashua, New Hampshire, caught a 5-pound, 15-ounce bass Thursday – the heaviest of the tournament in the Pro Division. For his catch, Dube earned the day’s Boater Big Bass award of $300.

Richard Perez of Naples, Florida, won the Co-angler Division and a new Ranger Z175 with a 90-horsepower Evinrude outboard motor with a three-day total of 12 bass weighing 28 pounds, 3 ounces.

The top 10 co-anglers on the Potomac River finished:

Darrin Wells of Stafford, Virginia, caught the biggest bass of the tournament in the Co-angler Division Thursday, a fish weighing 5 pounds, 7 ounces that earned him the day’s Co-angler Big Bass award of $200. 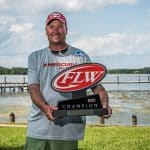