Exciting on-water action as Day 1 gets underway here at the 2019 FLW Cup on Lake Hamilton in Hot Springs, AR.

Several pros scored early limits but the guys we talked with right off this morning were mostly struggling. “Tough” was the word Larry Nixon used to describe the bite.

Nixon was drop-shoting an offshore brush pile. He caught a bass that warranted a measurement, but it was too small and was quickly returned to the lake.

We watched 2019 FLW Tour Angler of the Year David Dudley drop on some offshore brush as well. No catches that we could see.

Preston Craig, who qualified for the Cup as the 2019 TBF Boater Champion, caught a bass so small he tried to hide it from our TV camera until he could get it back in the water. But we saw it Preston!

As Chris Brown piloted the AnglersChannel Ranger upstream, we found John Cox in a shallow pocket. At that point he had a slow morning, though he caught a small limit later.

We eased into an eerie dense fog that covered the river from bank to bank. Scott Martin materialized like a ghost. He had gotten off to a descent start in water that was 25 degrees colder than that on Lake Hamilton’s lower end.

The air felt as if we had driven inside an industrial refrigerated storage area. The 58-degree water is being released from Lake Ouachita upstream and as it comes out of the bottom of the lake, it is cold. It’s also clear as drinking water.

The riverine section of Hamilton has lots of submerged grass, such as hydrilla and milfoil. The greenery combined with the cold clear water makes for an attractive fishing environment. It’ll be fun to see what the Tour pros can do in there this week.

Meanwhile, on the other side of the dam, the Kayak Cup pros are paddling, pedaling, and even using electric motors to mine Lake Ouachita for the 5 longest bass they can find in inches-to-win-it contest that doesn’t take weight into consideration. Each bass is photographed and immediately released. Only the best 5 count toward an angler’s total, similar to conventional tournament fishing with its 5-fish limit.

According to earlier reports, an 81-inch aggregate was leading the Kayak Cup. That’s a stout performance on what has been a stingy lake this week. We’ll check-in with the ‘yakers and the bass boating Tour pros at the weigh in show this evening.

Y’all keep an eye on anglersChannel.com this weekend!

P.S. – you’ll want to see footage of Ryan Saltzman getting his butt handed to him by a giant inflatable turtle while trying fish a pocket on Lake Hamilton this morning. Watch for that. 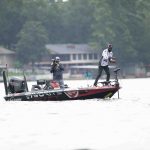