Top 30 after Five Stages advance to compete for nearly $750,000 in winnings

March 5, 2020 (Tulsa, Okla.) Major League Fishing released standings for Heavy Hitters presented by Venmo following the first two Stages of the Bass Pro Tour. Jordan Lee leads the field with a two-stage weight of 14 pounds, seven ounces. Dave Lefebre leapt to third place after a nine-pound catch on Lake Okeechobee during the Favorite Fishing Stage Two presented by Bass Cat. Brent Chapman, who led the field at the end of B&W Hitches Stage One presented by Power Pole on Lake Eufaula with his eight-pound-15-ounce catch, fell to number four after only scoring a four-pound-two-ounce largemouth on Lake Okeechobee.

The five-day tournament format will parallel REDCREST, featuring a 30-angler Qualifying Round on Days One and Two. The Top 20 anglers at the end of the two-day total qualify into a Knockout Round (Days Three and Four). The Top five anglers from each of days three and four will qualify into the 10-angler Championship Round (Day Five). 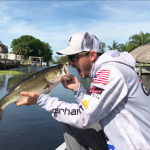