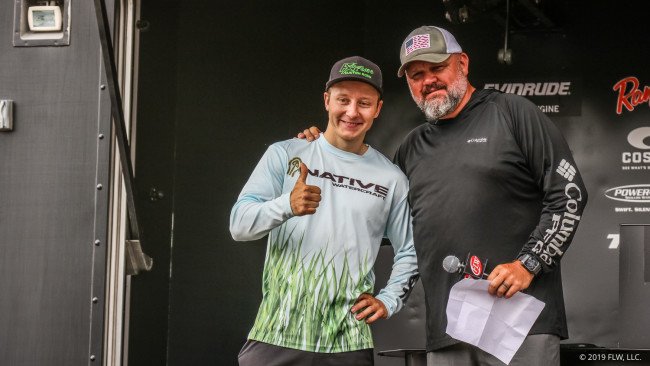 “When the storm came over those mountains, it went from calm to major gusts all at once. I had to fight the wind and hail – ice was hitting my deck. The temperature dropped about 10 degrees,” FLW Kayak Bass Fishing Pro Will Mansfield. 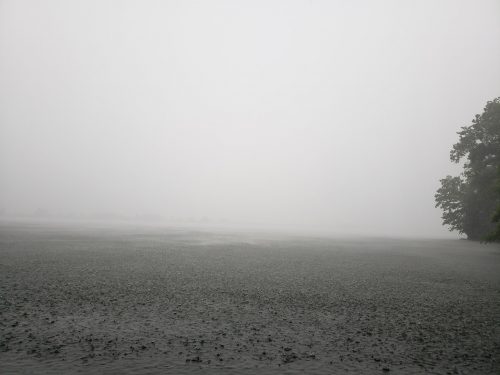 Mansfield is one of 103 anglers competing in the FLW/KBF joint tournament on nearby Nickajack Lake while the Tour pros fish Lake Chickamauga.

Bogdan Korostetskyi of Michigan leads with 92.5 inches on Day 1. He has a 3.5-inch lead over Ohio’s Brian Coyne. From there, the leaderboard is jam packed. 73 anglers caught a limit.

Mansfield, an Army veteran from Florida, is in fine position, “I went from 13thto 6thin the last half-hour when I culled 4 fish. I lost one that would have made a big difference, probably 20 inches, had to be a 6-pounder. I’ll be chasing her again tomorrow.”

One of the cool things about the Catch-Photo-Release format is anglers know where they stand. The FLW Tour pros fishing upstream on Chickamauga didn’t know how well they had done until weigh in concluded. But Mansfield can take pride in knowing what his late day flurry was worth.

However, just like his bassin’ brethren on the upstream lake, Mansfield used modern technology to dissect his water and find his fish. His Garmin 9” Side Scan gave him some clues.

And as do Tour pros, kayakers put in the miles when searching for fish. “I’ve put over 100 miles on Hobie 2019 Outback during practice.” Good thing he has the Mirage Drive to pedal his craft and give his arms a break.

Once he found the right deal Mansfield camped on it. “I might have travelled 3 miles today. I have two main spots that I rotated through.”

Timing is everything. “When they want to eat, they eat. If not, you can slow down and throw a worm if you want, but they’re just not going to open their mouths.”

When they do eat, Mansfield feeds them a specific lure in a specific color. “Any other color, I can’t get them to touch it.”

He’s dialed-in like any successful pro, and there are still five anglers ahead of him on the leaderboard. Mansfield understands that consistency wins in multi-day tournaments and he aims to actually improve tomorrow. “I honestly think I can catch 90 inches if all goes well.”

The experience has been fun. “The Top 10 got on stage at the FLW Tour weigh in show. The Top 3 got to speak. Hopefully, tomorrow I’ll have something to say.” 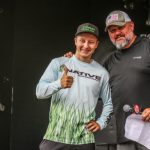