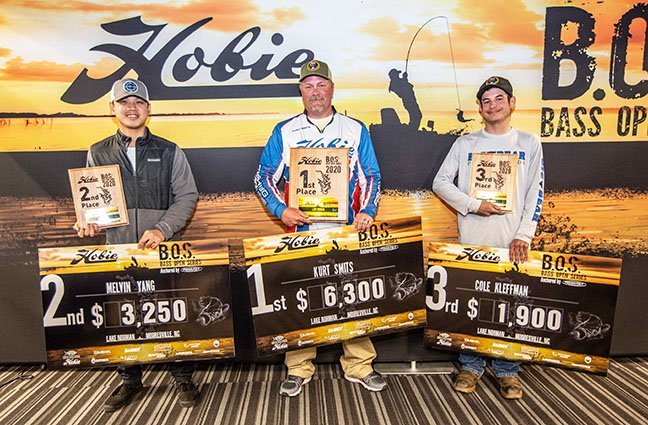 OCEANSIDE, Calif. (March 20, 2020) – Lake Norman, in Mooresville, NC has a well-earned reputation as an early spring hot spot for aggressive bass and it gave anglers exactly what they hoped for in the third installment of the 2020 Hobie Bass Open Series (B.O.S.) held last weekend. Following four straight days of warming air temperatures, both the famed spotted and largemouth bass at this legendary watering hole, the largest man-made body of water in North Carolina at 32,510 acres, were ready to rock and roll. With the aid of venue sponsors Visit Mooresville and the GoPro Motorplex, so were participants that came from across the country to test their black bass skills against top-level competition.
“We had a perfect storm of factors come together to fire up the fish,” said Hobie B.O.S. Tournament Director, A.J. McWhorter. “Rain early in the week gave way to four days of temperatures over 70 degrees and drew a ton of hungry fish into the shallows. That provided great bite opportunities for our anglers. The bass were hitting hard baits, soft baits, moving baits, crawling baits and even some topwater patterns, as evidenced by the 1,215 fish registered by 116 competitors. That’s a new, all-time B.O.S. record.”
Indeed, anglers were filling limits and culling fish at a super-fast pace on both days of the tournament with 75 limit catches on Saturday and 72 on Sunday. With many similar-sized bass in the haul, however, culls often added only one-half- to one inch onto an angler’s tally. That may have made it difficult to get a little separation, but with many making multiple culls each day, watching the leader board proved to be quite exciting. Following day one, only two inches separated the top five contestants, with Melvin Yang, 27, leading the way with a 90-inch total. Eventual winner, Kurt Smits, 49, of Terrace Park, OH, meanwhile, was lurking in seventh position with 86.50” of bass, 3.5” behind Yang, while third place finisher Cole Kleffman, 17, of Seymour, IN was sitting in a comfortable fourth place just two inches off the pace.

Your winners: Melvin Yang, Kurt Smits and Cole Kleffman
“I was happy with my first day results,” revealed Smits. “I knew there were some really solid anglers ahead of me, but when the fish turn on like that, anything is possible. Three-and-a-half inches is something you can make up in a two-day tourney. Heck, I made up 10 inches on Lake Seminole back in February, so I knew I was within striking distance if I fished clean and things broke a little bit my way.”
Smits had spent his first day fishing in front of three prominent points that jutted out across a shallow flat and reached out nearly to the middle of the lake. “That was the first spot I noticed when doing my mapwork before the tourney,” he said. “They were dramatic points but close enough that I could get to them easily in my Hobie Pro Angler 14. My pre-fishing sessions had brought mixed results but as soon as the tournament began, I started catching. In the mornings, most of my fish smacked a small Strike King Rage Swimmer on a tungsten 1/4-ounce jighead made by Picasso lures in 4- to 6-foot depths. In the afternoons, I moved out to 10 to 15 to feet of water and used a Texas-rigged Z-Man Big TRD. With that lure, I would cast out as far as possible, give a little slack, and then allow the wind to blow me across the points and over deeper water. You never had to guess if the fish were biting in this tournament. They were mainly spotted bass and they were hitting hard.”
Smits used a St. Croix 7’ Legend Tournament Bass, medium-fast spinning stick and 20-lb. braided line with a 12-lb. fluorocarbon leader to toss his Rage Swimmer. To work the Z-Man Big TRD, he opted for a 7’1” St. Croix Legend Extreme, medium-heavy power, fast action casting outfit spooled with 35-lb braid and a 17-lb. leader.

Melvin Yang, meanwhile, was cleaning up the bass on day one in his Hobie Pro Angler 12 camo edition kayak. Focusing on a rip-rap bottom that passed beneath a bridge before fanning out
amongst a field of boulders and chunk rocks, he probed a spot where a significant channel bordered a 6’ to 8’ deep shoal. There he found the bass ready to slam crankbaits right along the drop-off, with Spro Ruko Shads and Rock Crawlers his weapons of choice.
“Red was the key for me,” recalled Yang. “Anything red or crayfish-colored seemed to work. Red with an orange belly was my top crankbait pattern.”
Day 2 found both Smits and Yang back in their respective hot spots. “I got off to a solid start,” recalled Yang, “but my action dropped off in the afternoon and I finished with 83.5” while Kurt managed to keep on catching. He had an amazing day.”

He certainly did, and it could have been even better. On his third cast of the morning, Smits hit a nice bass he figured would measure roughly 20 inches. After netting the fish, however, the lure got tangled in the mesh and the bass used the leverage to flip onto the deck, then onto the floor of the kayak and, finally, with one big leap, back into the drink.
“As the day grew late, I was thinking about that lost fish a lot,” admitted Smits. “Melvin didn’t post his results until nearly the end and that gave me plenty of time to wonder if my 90-inch day-2 score would be enough. I was sweating bullets when the final numbers went up. It would have been tough to take if that fish had been the difference.”
While Smits and Yang were battling it out for first, Cole Kleffman just kept pounding away. After hauling in 88” of bass on day 1 to place himself in fourth position, he managed 83.75” on Sunday, enough to move up one spot, take the bronze and qualify for the Hobie Tournament of Champions (T.O.C.).
“I was burning down the bank on day one when I stumbled upon a point that spilled out onto a flat with some big boulders,” recalled Kleffman. “I caught my limit there on a Z-Man Chatterbait Jack Hammer in about 15 minutes and just culled the rest of the day. On day 2 I hit the same spot but with a slight cold front approaching the bass wanted a finesse retrieve, so I switched to a Ned rig with a 1/20-oz.Z-Man Finesse ShroomZ jig head and 2.75” Z-Man TRD. I’m happy with my performance. I had about 15 fish from that area each day. My Hobie PA12 was a big help, too, because it allowed me to lay my rods flat for 360° castability.”
Unlike the top three finishers, fourth place Ryan Lambert covered a ton of water on Lake Norman. On Saturday he got off to a decent start working a marina area and flipping some small wooden docks to tally 84.5”. On Sunday, he returned to the same spot and quickly drilled one good fish before the action screeched to a halt.
“I knew I’d need more bites to stay in money,” said Lambert, “so I rolled the dice and drove an hour-and-a-half north to a spot where friends said they had good luck recently fishing muddy water off a shallow, windy point.”
It was 1:30 p.m. before Lambert started casting again but the move paid off big-time as he tallied 86.75” of bass and qualified for the T.O.C.
In the end, Smits earned the win over Yang, 177” to 173.50”. His top fish measured 20 inches and he had three more in the 19-inch class. Kleffman used his Hobie PA12 kayak to advance to third place with 171.75” and fourth-place finisher Ryan Lambert, of Chattanooga, TN also broke the 170” barrier (171.25”). Shane Williams of Orange Park, FL, on Saturday drilled the biggest fish of the tournament at 22.25”. Spotted bass were the stars of the show as they greatly outnumbered bucketmouths among the top finishers.

Payouts for the Lake Norman B.O.S. tourney covered the top 12 spots with Smits receiving a healthy $6,300, Yang earning $3,250, Kleffman taking home $1,900, and Lambert pocketing a cool $1,600 payday.
““I absolutely love these B.O.S. events,” Smits offered when the big show was over. “Hobie does a fantastic job making it about all the anglers, not just the guys who bring home a check. They have a killer raffle, feed you for a night, and do everything possible to assemble a very competitive field while keeping things fun. Everyone’s always in a great mood. We catch fish, we laugh, we learn. They’ve knocked it out of the park with these tourneys.”
McWhorter couldn’t be more satisfied with the results. “That’s exactly what we strive for,” he said. “We want everyone to be competitive, but we also want every competitor to have a great time. We’re especially proud that we were able to work with our anglers to ensure everyone’s safety while staying within the great state of North Carolina’s guidelines at the time for limited gatherings and other health considerations. That only works when respect rules the day and everyone is on the same page.”
All photography by Shane Durrance 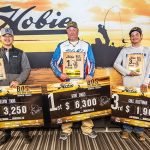