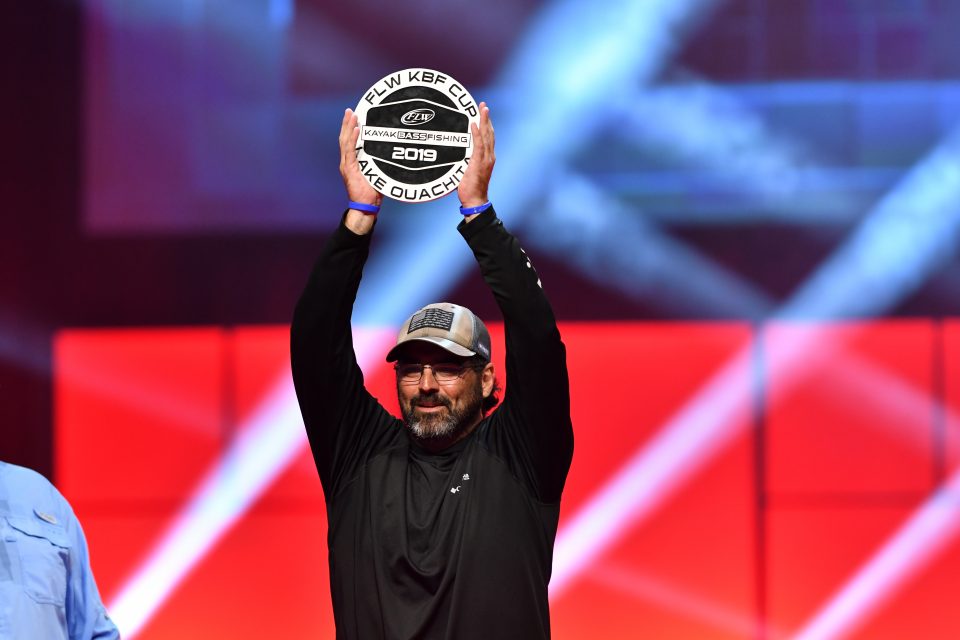 The kayak fishing pro from Rome, GA topped a field of 72 on 40,000-acre Lake Ouachita over two days of competition. Low water and a slow bite, typical of August, awaited the anglers. Henderson solved the problems better than anyone else.

“I traveled up here with my real good friend Jim Ware. We did a bunch of homework, watched a lot of FLW Cup coverage and had the exact brush piles where (2018 FLW Cup Champion) Clent Davis caught his big fish last year. I did the ninja skills and said ‘hey, I see those buoys and I remember seeing that on the GPS satellites.’ We found that and fished there first and we did ok, but I think, with them dropping the lake levels like they did, I don’t think it was the same as it was when Clent was here last year.

“So, we hit another spot that we liked, that had some features like back home that we like, and when I went to the first spot I really liked, my screen just lit up – I’ve got a Humminbird Mega 9 on there. They moved from about 12 to 18 feet throughout the tournament, depending on the weather. I wanted more sunshine because I think I could have done better. I caught 3 good fish easy in pre-fishing when we found the spot. We got all this cloud cover during the tournament, so it was a tough bite up there. They scattered out. They weren’t hugged down there all the time like I wanted them, where I knew I could catch ‘em good, but it was still good enough.”

A late fish made the difference for Henderson, “I had a limit easy early yesterday, though I lost a big fish up shallow. Today it was a grind and I let a 12-and-a-half-incher flop off the board. I thought ‘this thing’s gonna bite me.’ I went forever with 4 fish. Almost on the hour, an hour left to fish, I caught my 5thfish of the day, a 19-and-a-quarter. It was already past the lunar peak and I thought ‘this bite is probably over. It ain’t gonna happen,’.”

Henderson was dragging a creature bait on hard bottom 15 feet down on a river ledge. “I fished where I thought I should have got bit and when I went to burn it back up to the boat, he about took the rod out of my hand. I didn’t catch another fish after that one. That was the one.

“When I netted that fish, it felt like I had won. It took me 15 minutes to recompose myself. I cried.”

Henderson is excited about the direction kayak fishing is headed. “I can’t wait to see where it goes. It’s grown so much in the last few years since I started doing it. I used to fish local bass boat tournaments and when I first got into kayak fishing it was just much more lucrative. I came out in the black for the first time,” he said, pointing to the lower operating expenses of angling from a kayak as opposed to a motorboat.

“I cut a check in my first one and I was like ‘this could work’. I love fishing from a kayak. I go out in a boat now and it feels weird. I have trouble landing fish because I don’t have that give. A big fish can pull that kayak around but a 20-plus-foot bass boat, a bass can’t move it.”

Henderson has experienced success before. He has used the platform to spread the word – God’s Word. “I started that Fishers Of Men Kayak Page on Facebook. I put it out there at the forefront: if you want to pull for me, here’s what I am, I’m a Christian and if you want to know about that, then get ahold of me.”

Experiencing the Creator’s handiwork on a deeper level is a huge draw for many who choose to fish from a kayak. Henderson says he’s better connected to his environment and the fish that swim in it for that reason. “The little things – that’s the part of fishing that I really learned from kayak fishing. I see every little baitfish, every little swirl, because I’m sitting down there on the water, tuned-in to it, listening. There’s no trolling motor buzzing. There’s just you and the Creation. Tuned in. Part of the river.” 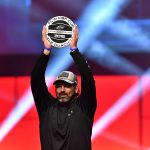