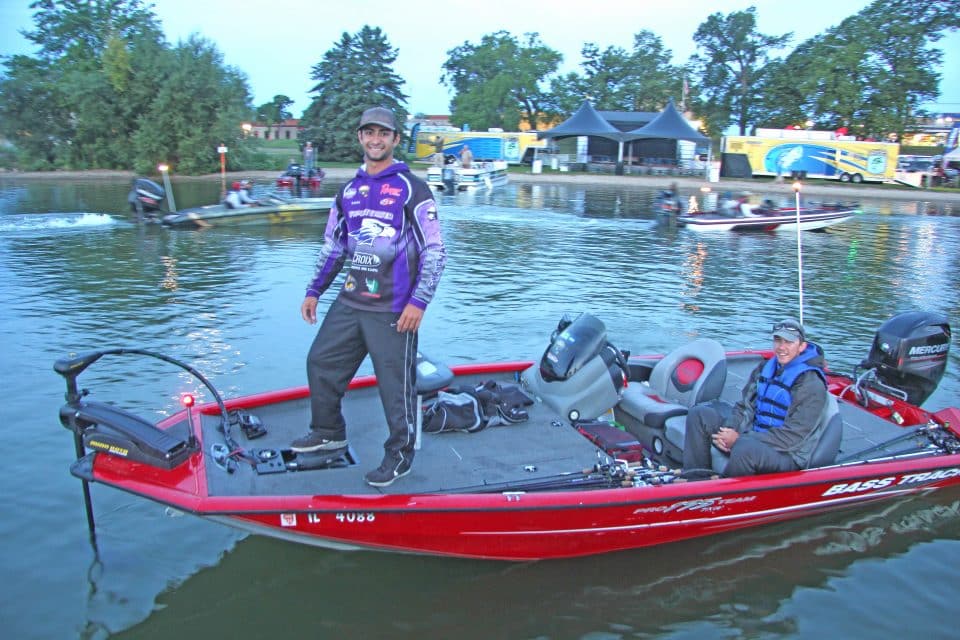 Louie Dazzo doesn’t mind that the faded black mesh Carhartt hat he’s wearing at this week’s Bassmaster College Series National Championship shows a salty sweat ring — or that his red boat is slower, and made of aluminum, instead of faster fiberglass.

“I’ve had this Carhartt hat for three years, I wear it almost everyday, and I always wear it when I’m fishing, I’m kinda superstitious about it,” grinned the communications major from the University of Wisconsin-Whitewater.

And as for the red 17-foot aluminum Tracker boat with the 60-horse engine — well, Louie loves it. As well he should. His grandma bought it for him when he turned 18, and its carried he and fishing partner Collin Crop, a hockey goalie and human resources manager, all the way to the biggest tournament in college bass fishing.

“I realize it’s one of the less fancy boats out here, but it was good enough for us to finish second at the Lake of the Ozarks regional, and I’ve got about eight Top 10 finishes in this boat,” says the good humored Dazzo, a native of Naperville, IL, who leaned on Spro Rock Crawler crankbaits, and a Vision 110 jerkbait at the regional competition.

Certainly, on a college kid’s budget, not all the vessels here on Lake Bimidji are fancy new fiberglass models. There are other aluminum boats like Louie’s, as well as fiberglass vessels that are twenty years old.

“I sort of see the versatility, toughness, and how high the front end of my boat sits out of the water as an advantage,” says Dazzo. “I can beat the heck out of it, run it up into a foot of water, and have a higher vantage point when looking for spawning beds, or smallmouth on shallow flats, than what I could in a bigger fiberglass boat.”

“It’s a great starter boat, that’s for sure, and ultimately, the success you have as a tournament angler is more about your ability to find and catch fish than what your boat is made of,” says Dazzo in humble fashion.

While most anglers complained of Lake Bemidji fishing super tough, and sporting a stronger than desired northern pike population, Dazzo and his hockey playing fishing partner had a solid practice day Tuesday.

“Our top end speed is only 30 mph with this little 60 horsepower engine, so it takes us one hour to get to our fish, but we caught a 12-pound limit yesterday, and one of those fish was a 3 ¾ pound largemouth,” says Dazzo.

With a red aluminum boat, and a heart made of passion, look for the guy in the sun-bleached black Carhartt hat to be one of the last anglers standing during Saturday’s final day of competition.

Go get them ! It isn’t the boat, it’s the stick on the front of the boat that matters! 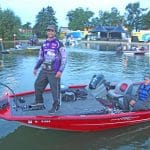