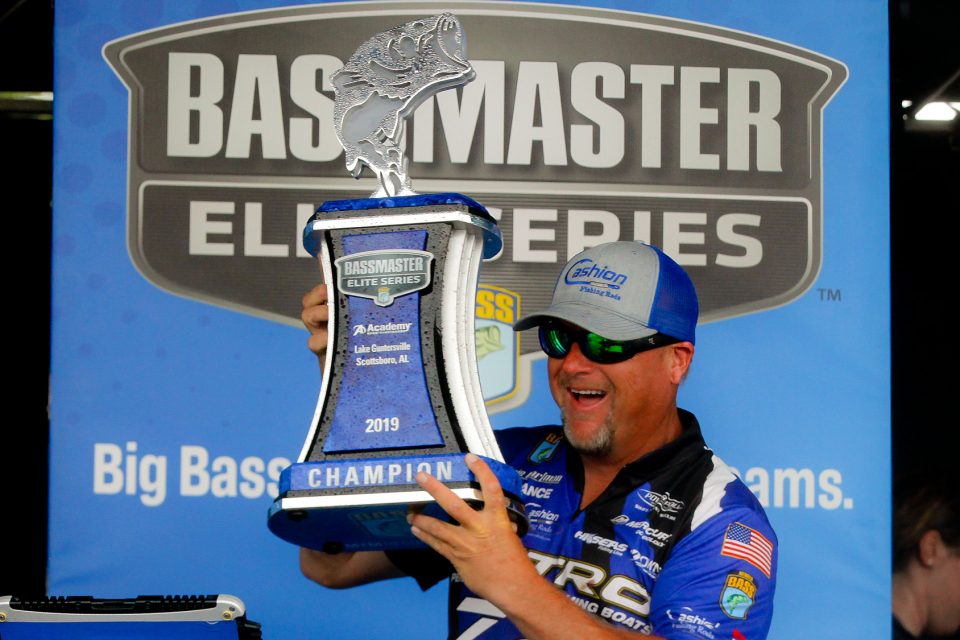 A year ago, to the week, AnglersChannel.com shared the news that Jamie Hartman had taken a medical leave from the remainder of the 2018 Bassmaster Elite Series due to an extreme case of sciatica that was severe enough to drive him to the hospital.

“If I could just lay on the deck and cast a Senko I would,” lamented Hartman at the time. He said then that a fire burned inside him and he was bent on making a return to competitive fishing.

In a rare Monday evening final weigh in and a storm-shortened show lacking the usual pomp and circumstance, and suspense that the televised Elite Series weigh ins are known for, Hartman watched from the hot seat-turned-wet seat as several anglers were rushed across the stage, none able to unseat him.

It was a fitting ending to a most unusual week for Hartman who has placed in the Top 10 a few times in his 3-year Elite career, but never won an Elite Series tourney and never fished Lake Guntersville.

Hartman has made some lifestyle changes and regained his health. Once a professional truck driver, Hartman became a road warrior of a different stripe when he disposed of most of his belongings, including his home, and rang-in 2017 by scouting the waters on which he would fish his rookie season of the Elite Series.

All of that time sitting behind the steering wheel can bring on nerve ailments such as the sciatica Hartman wrestled with last year.

Also, the eating habits of travelers are not ideal, unless you make prior arrangements. “I changed my diet quite a bit. I’ve lost 20 or 25 pounds, something like that. I knew I’d have to do it.

“I wasn’t fat, but you put a little extra weight on from eating bad. I do a lot of prepared meals and take them all with me now, so I don’t have the urge to eat bad.”

As a result of his new routines, Hartman is feeling much better. “I have the usual ‘old man’ pains when I wake up,” laughs the straight-shooting 47-year-old.

Has his overall fitness level influenced his performance on the water?

Hartman has been a competitive threat from the start of his career. He may be, finally, hitting full stride.

Hartman has found a new home in Russellville, Arkansas. He had friends there. “Now I’ve got a girlfriend there that I’ve had for 9 months too. All is good.”

His lady was present, in a boat with some of those friends to watch Hartman take the lead on the final day at Guntersville though she gave no indication that he had done so because the pros had agreed not to look at BASSTrak standings before weighing their fish at the end of the day.

Now that he has the big blue trophy in hand, Hartman has admitted to feeling “a weird intuition” about winning this tournament even before he launched his boat for practice.

“I just had this vision and this, I don’t know man, it was like a, just a weird feeling. I’ve never had it before. I’m very humble. I’ve never said ‘I’m gonna win this event’. I know how fishing is and there are far too many variables. I told my girlfriend, I said ‘I think I’m going to go and win this event’. And it was just strange, man.”

Hartman’s strange intuition proved so true that not even a couple of bouts of bad luck could knock him out of the running in a tournament that he never led – until it counted most.

“I had a situation on Day 2 that came over me at the end of the day. It gave me goosebumps after I caught the fish. Trying to get into the Top 35 cut, I didn’t know if I was going to make it because I bombed so bad on Day 1, and I looked back in my livewell with like, 35 minutes to go, and I realized one of my fish was dead. It was my number two fish from the morning that I stuck in the tongue and I nursed it all day long, for seven hours.

“I was freaking out. I thought ‘there goes my 4 ounces. I needed that. I’m not going to make it now’.

“So I turned my livewell to ‘fill’ to flush all the acid and the dead fish gook out of my livewell for my alive fish. I went back to the front and I kept fishing and I got to thinking ‘Dummy! You’re putting hot water into the livewell after you’ve been cooling ‘em all day’. So I let it run because I still wanted to get the stuff out of there. So I’m going down the grass line, punching matted grass and I went to turn around to go back to turn my livewell off. I turned back around and then I turned around again to set my rod down and go turn my livewell off and put ice in it, and I just looked forward and I saw, I don’t even know, it wasn’t even that much of a sweet spot in front of me, but I turned around and made myself make one more pitch before I put my rod down and when I did that, I caught a 5-something.

“I got freaking goosebumps.

“Something made me not put my rod down.

“It was unexplainable, and I just let it out, like, I told my marshal what went over me. It was just crazy.”

Hartman may have had The Force working in his favor, but he deserves much credit for fishing clean and executing superbly. Most of the time.

“I lost one in the last hour-and-a-half before check in. I lost a big one on a log with a jig. I got him hung under the log. When he came out the other side of the log, I could see him roll down there and I kept steady pressure on him; never did get a good hookset on him because as soon as he hit me, he went under the log. All of a sudden, he came out. I don’t even know how I got him out, but he came out and then he comes right up and jumps and lands and I’ve got him on still. I walked that fish from the back of the boat, and I was going to come around the other side and grab him because I knew I didn’t get a good hook in him, he came out by the motor and he jumped again and spit the jig. My buddy was right there and captured the whole thing. He said ‘Dude, I don’t know how big that thing was, but wait ‘til you see the pictures. It was big.’ I lost that fish and I was mad because I had a 3-3 in the livewell and that would have been the big one, but it swam back into the log. They always swim out.

“After that I just shook it off, went back to punching the mat. Then I made a decision to make a run. Thank God I did.”

Hartman followed his instincts to the end. “I went scouting (even on) the last day; went to fresh water, something I had looked at the day before, but I went to try and expand on that, looking for more fish because the wind was atrocious. It was tough to flip in that wind.”

As bad as the weather was on the final day, Hartman’s biggest obstacle was the slow start in the tournament’s opening round that almost caused him to miss the first cut. He made a bold decision that night.

“I had to switch because the fish started abandoning the offshore stuff, which is crazy for this time of year, and I just went to the grass. I switched up.

“Going and fishing eight-feet-and-under was the ticket.

“I just said ‘I’m going to put my trolling motor down and I’m just going to flip. I don’t know what’s in front of me, but I’m gonna just keep going.”

Given his druthers, Hartman would like to catch ‘em “Deep. Definitely. I think I can get on a school of fish and wear ‘em out. I can figure out different ways to catch them when they shut down and what not. That’s why I (initially) stayed out deep. I had two good schools of fish located out deep in practice, but we had pretty good winds in practice, every day, but it was the same wind – southwest – and then Day 1, slick as slick could be and hot as Hell. And Day 2, same thing. Day 3, same thing. My schools disappeared.”

But then late on the final day, having settled into a dependable grass bite, Hartman looked at the wind-whipped waters of Lake Guntersville and scrapped it all once more and, again, found the fish he needed to validate his “strange intuition”.

“I made that choice with, I don’t even know, an hour and fifteen minutes left, to go run and check that deep school that I had in practice that was gone because we had the wind again.

“I turned around and I just started catching them. I caught the 4-4 that culled-out the 3-3.

After losing the 5-pounder on a shallow log, Hartman had made the snap decision to run to a deep ledge and catch a bass that would ultimately give him a 6-ounce margin of victory.

As the winds that had brought his fish back to the ledge tore apart the tent behind the weigh in stage and buckets of rain sent the crowd of spectators scrambling for cover, a grateful Jamie Hartman hugged his first blue trophy. Alone on a rain-soaked stage.

The difference a year makes. 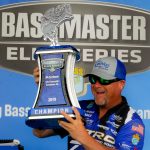