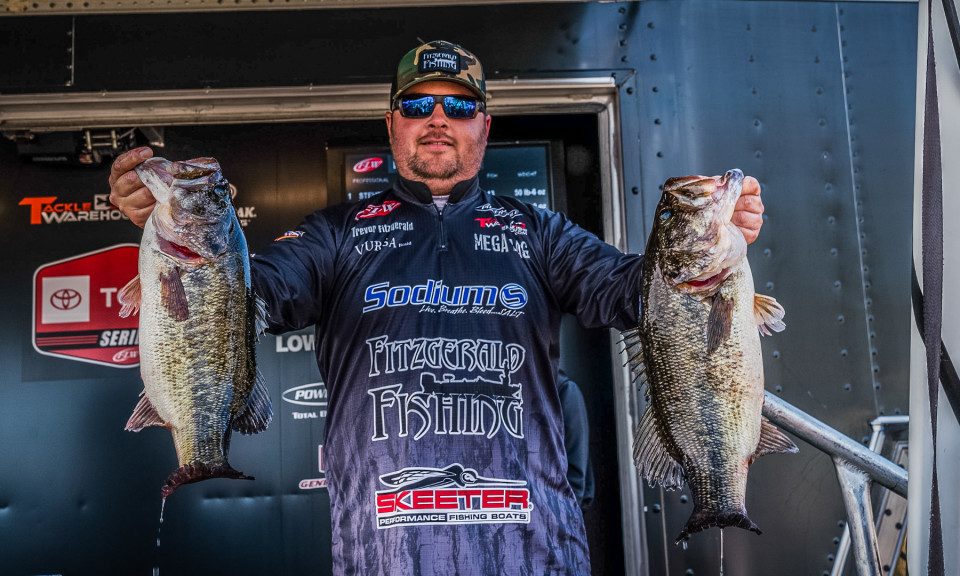 FOR IMMEDIATE RELEASE: PALATKA, Fla.(Feb. 16, 2020) – Pro Trevor Fitzgerald of Belleview, Florida, brought a 19-pound, 8-ounce limit to the weigh-in scale Saturday to reclaim the top spot on the leaderboard and win the three-day Toyota Series at the St. Johns River. Fitzgerald’s three-day total of 15 bass weighing 57-12 gave him the win by a 6-pound margin and earned him a payout of $38,048 in the Toyota Series Southern Division 2020 opener.

“I’ve been wanting this one for a while,” said Fitzgerald, who earned his first career Toyota Series victory after five previous top-10 finishes. “I seem to do okay in one-day tournaments, but I excel in these multi-day tournaments because I don’t typically go out and catch a giant bag. I usually find stuff that is more consistent.”

“On day two I didn’t have any spawners left, so I went to running the bank and found a little depression that I’d known about, but I came to realize there was a lot more fish sitting in it than I realized.”

What Fitzgerald was fishing was basically a long sand bar at the far south end of Lake George, which served as a staging area for fish coming to the bank to spawn. No one else seemed to find it, potentially due to how shallow it was.

“It’s just a depression surrounded by super-shallow water. I used to put in at that boat ramp right there when I was a kid, so I was kind of familiar with the way the bottom lays out.”

“I grew up about 20 minutes from the south end of Lake George, and I’ve been fishing here my whole life,” Fitzgerald went on to say. “I love fishing the St. Johns River and it is awesome to win here.”

The top 10 pros on the St. Johns River finished:

A complete list of results can be found atFLWFishing.com.

Carson brought a 9-pound largemouth bass to the scale Friday – the largest fish weighed by a boater in the event – to earn the day’s Big Bass award of $135.

Gallelli took home an extra $1,000 as the highest finishing FLW PHOENIX BONUS member. Boaters are eligible to win up to an extra $35,000 per event in each Toyota Series tournament if all requirements are met. More information on the FLW PHOENIX BONUS contingency program can be found at PhoenixBassBoats.com.

Edwin Bartlett of Casco, Maine, won the Co-angler Division Saturday with a three-day total of 12 bass weighing 29 pounds, 12 ounces. For his win, Bartlett took home the top prize package of a new Phoenix 518 Pro bass boat with a 115-horsepower outboard motor, worth $33,500.

The top 10 co-anglers on the St. Johns River finished:

Alan Carver of East Point, Georgia caught the biggest bass of the tournament in the Co-angler Division Thursday, a fish weighing 9 pounds, 8 ounces. He earned the day’s Co-angler Big Bass award of $90.

The Toyota Series at the St. Johns River was hosted by the Putnam County Tourist Development Council. It was the first of three regular-season tournaments in 2020 for Southern Division anglers. The next tournament for Toyota Series anglers will be the Central Division opener – the Toyota Series at Lake Chickamauga, held Feb. 27-29 in Dayton, Tennessee. For a complete schedule, visit FLWFishing.com.

About FLW
FLW is the world’s largest tournament-fishing organization, providing anglers of all skill levels the opportunity to compete for millions in prize money across five tournament circuits. Headquartered in Benton, Kentucky, FLW and its partners conduct more than 290 bass-fishing tournaments annually around the world, including the United States, Canada, China, Italy, South Korea, Mexico, Namibia, Portugal, South Africa, Spain, and Zimbabwe.

FLW tournament fishing can be seen on the Emmy-nominated “FLW” television show while Bass Fishing magazine delivers cutting-edge tips from top pros. Acquired by Major League Fishing in late 2019, FLW is expanding its programming in 2020 to the Outdoor Channel and the Sportsman Channel as well as on-demand at MyOutdoorTV (MOTV). 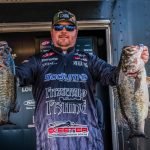