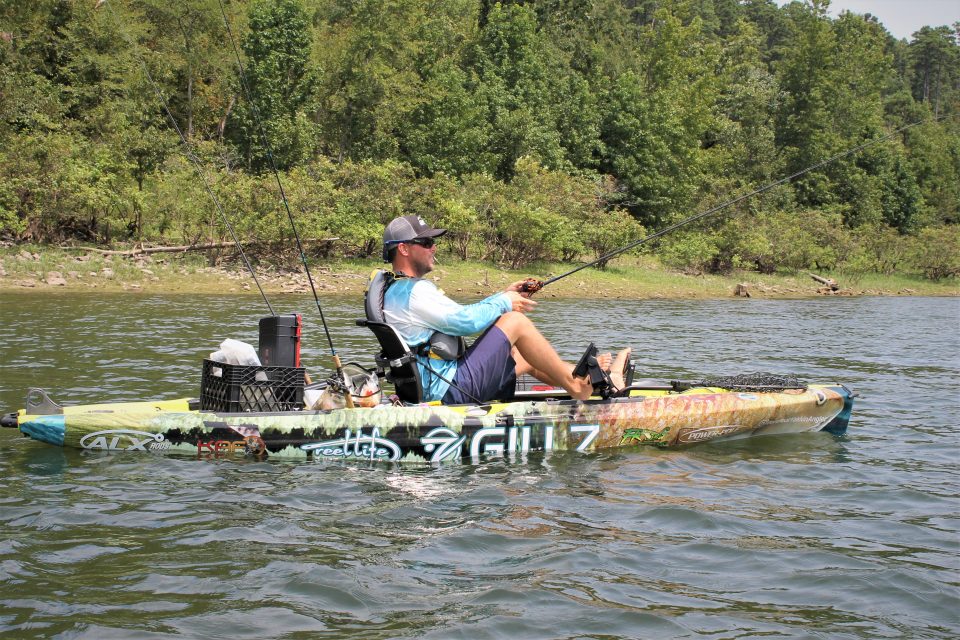 Bites have been tough to come by during practice here at the first ever FLW/KBF Cup – a joint venture between the FLW organization and Kayak Bass Fishing.  The playing field is Lake Ouachita, the largest lake in the state of Arkansas which fishes bigger than its 40,000 acres as its jagged shoreline is riddled with countless creeks, coves and indentations. Tributary arms sprawl off in all directions.

Lake Ouachita is one of the Creator’s greatest jigsaw puzzles. And in August, just finding the pieces can be tough for anglers in search of shy fish.

Let’s ramp up the degree of difficulty by taking on this lake in a kayak. A number of our nation’s best anglers have accepted that challenge. I was fortunate to spend a practice day on the lake with one of them.

Will Mansfield has earned a reputation around Florida as well as the kayak corner of the worldwide web as quite a stick. But here in Arkansas the US Army veteran who is comfortable jumping out of perfectly good airplanes was a bit uncertain as to how to go about finding a few good fish. “If somebody can just catch a limit each day, they’re gonna do well. I believe that.”

In three days of practice Mansfield had found one spot where he could catch a couple of fish. Finding bass, in general, isn’t so hard. Finding bass that will play is another thing entirely. Mansfield and another competitor circled a big area trying to hook elusive schoolers that blew up and disappeared just as quickly. He got a couple of soft bites and no solid hook ups, despite numerous followers that just studied his many and varied offerings. At the end of the day Mansfield’s boat was littered with lures of all description. Conversations with a couple of other competitors who paddled through the area revealed that none of them had figured out much.

“If I had twice as many fish as I’ve caught today, I’d still have no fish,” quipped Mansfield. Indeed, zero times two is still zero.

Somebody will walk away with the big check though.

As kayak tournament fishing is in its nascent stages, most competitors don’t have a backlog of experience on waters outside of their own region. A few dedicated pros do, but local knowledge is going to play a huge role in this event.

Cody Milton is from Arkansas. He is also the 2018 KBF Angler of the Year. As such, he’s a favorite to win the inaugural Kayak Cup.

Advancements in electronics have done much to level the playing field for visiting anglers. Kayak pros have taken advantage of that advantage, along with those afforded by lighter batteries that power electronics and, increasingly, motors as ‘yakers are powering up to compete in a sport that is advancing at warp speed.

‘Exhibit A’ would be a 27-amp lithium battery that Mansfield handed to me. The Energized Outdoors battery was shockingly light. “It’s good for thousands of cycles,” said Mansfield, “and I charged it three days ago so I’m going on my 4thday with it one a single cycle and there has been no drop off yet. Full power. And look how easily it fits,” demonstrated Mansfield, pulling a box from a compartment in his Hobie and then sliding the battery into the hull. It fits most budgets as well. Even bass boaters with 4 batteries can jump into the lithium game. “That would save somewhere between 150-to-200 pounds in a boat,” noted Mansfield.

Properly equipped with electronic intel, anglers such as Mansfield can look, heartbroken, at the bass suspended on their screen. The fish were just hanging out until they wanted to make brief feeding sprees that happened sporadically throughout the day.

With warm, overcast, breezy conditions called for, the schooling bite could become more consistent. But at this point it looks like fool’s gold in the Ozark hills.

Past FLW Cups have been won on Ouachita by Brad Knight who worked a grassy pocket for the win, and Clent Davis who took the title last year by swimming a worm through offshore brush piles. Back in 2007 Scott Suggs won the title on Ouachita by targeting deep cedar trees and brush piles on structure with jerkbaits, swimbaits and worms.

Finding such spots from a kayak is hard to do on the big lake. Even the most advanced motors in use today will only push the light craft about 6 mph. Again, local knowledge about where to go could save an angler a lot of time. Lost time is hard to make up at 6 mph.

Floating sprigs of grass reveal that there is some vegetation in the reservoir. “Ah man, if I could find a big bed of this,” said Mansfield, holding up a 5-foot strand, “I would be in great shape!” The grass was mostly just a stalk with a tuft of greenery at the very top, but a patch of it could hold the winning fish. Given its appearance, it could have grown in deep water, though water levels have changed dramatically the past few days.

“They have been working on this ramp. You can see the new patch of asphalt they poured. They stopped right there, where the water level was yesterday. Today, look how far down the water has gone,” said Mansfield, taking a couple of strides to the water’s new edge a few feet away.

A microcosm of society at large, kayak bassin’ is not without its conspiracy theories. There is some speculation that local authorities are pumping extra water downstream into Lake Hamilton so they can run more current and help the fishing for the FLW Cup contestants who cast a brighter light on the state of fishing in the state of Arkansas.

Then again, given the 95-degree temperatures in the region, electric companies, such as the one that owns Lake Hamilton, will need to run the turbines anyway to power up all those air conditioners in Hot Springs.

While reduced water levels have left attractive cover high and dry, the current flow could make for some hot fishing action. If anglers can figure out where to cash in. 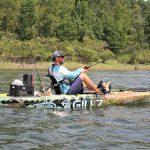