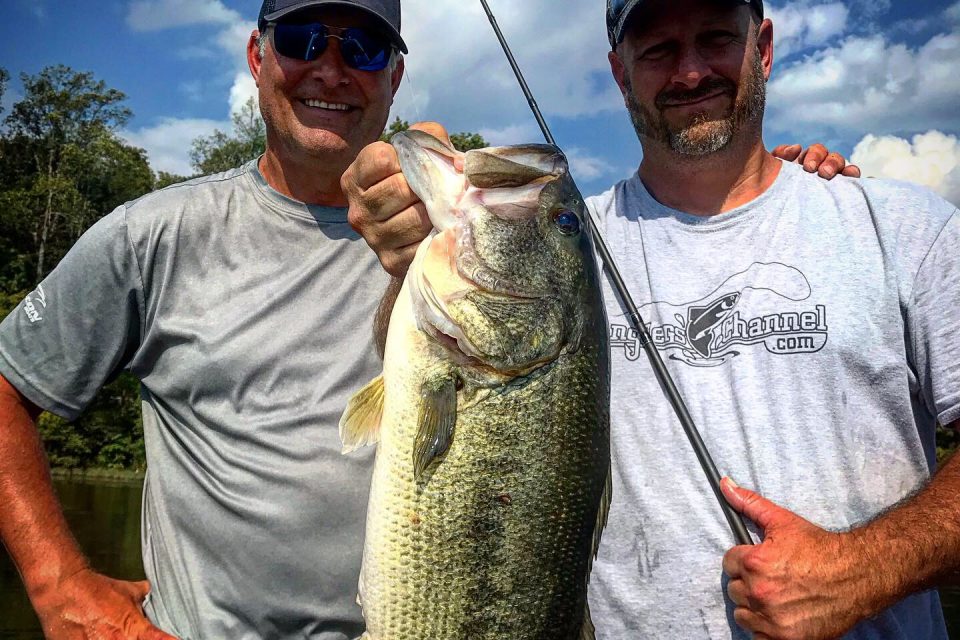 Major League Fishing Pro Brandon Coulter is hitting his stride in a tournament fishing format that still throws many of the sport’s best for a loop. They all seem to enjoy it, but it is a challenging way to compete: minimal practice, a ticking clock, and constant knowledge of how well you’re doing. Or not.

An athlete through and through, Coulter is not one to shy away from a challenge. In fact, he has an MLF Challenge Select Championship on his resume.

When he invited me to join him for what we knew would be a sporting effort to get a few topwater bites under record late September heat in the mountains of East Tennessee, I jumped at the opportunity. Oh, did I mention that Coulter has the hook-up with a beef jerky company?

“That’s the worst lake in Tennessee,” said another angler about our choice. Perfect. Challenge accepted.

Worst conditions on the worst lake in the region? I’m in. All we need now is some fishing gear with the lucky number 13 on it and we’re set for a day that would make a monk cuss.

Then again, it helps to have friends. Kenny Needham, owner of Crocket Creek Jerky met us at the boat ramp and rode along. We leaned on his knowledge of the lake, which will remain unnamed in this story as a nod of consideration to the locals who fish it – hey, the rest of us have nearby Chickamauga, Tellico, Watts Bar, the latter two are coming on strong as grass continues to grow in those reservoirs.

Coulter glides his Falcon boat into a pocket off the upper end of the main lake and immediately goes to work with a Trash Panda popping frog. It’s white. He expertly skips it into likely looking hidey holes beneath snaggy branches that lean far and low over the water and obscure the shoreline.

One such cast is appropriately rewarded. Coulter is tickled with the fish’s tenacity, if not its size.

Action slows and Coulter switches to a walking version of the Trash Panda. He’s betting on black now. “Color does matter, but I’m more concerned with contrast. Sometimes they can see a white, or light-colored bait against the sky better and sometimes they can see a dark one better,” says Coulter, noting that the skunk stripe on this black bait comes to a white spot on the lure’s nose. “That bright white spot makes it easier to keep track of.”

Coulter catches another feisty little bass. “The white spot disappeared so I set the hook,” laughs the affable pro. So far, the frog fish have been small.

As he ends a retrieve near the boat a big fish craters the surface at the edge of a sparsely matted grass bed. A swing-and-a-miss has Coulter shaking his head. “That was a big one!”

The pro fishes his way around the pocket and Needham suggests we visit another stretch of water where a friend of his caught 45 bass five days prior.

At first blush the pocket is identical to the others we’ve explored, except bigger. The water carries a light stain amid countless clumps of topped out grass in depths of no more than three feet.

“Most people wouldn’t think bass would be so shallow in 90-degree water,” says Coulter. But he’s found an exception, “We’re close to the upstream dam. The water up here is coming from the bottom of the next lake so not only is there a little current in this area, the water is much cooler. Fifteen degrees cooler than down the lake. While that’s a good deal, something people often miss is the fact that the temperature in these backwaters is somewhat cooler but it’s still closer to what the fish have become acclimated to and that extremely cool water coming down from the dam can push them off the main lake and back into these pockets where the temperature stays more moderate and not to either extreme.”

While the presence of grass doesn’t hurt, these bass are not hunkered beneath it hiding from the sun. We see them cruising between the clumps in the cool clear shallows. It’s a classic Goldilocks situation – not too hot, not too cool, just right.

So why aren’t fish crushing the frog? Sometimes you can’t explain; you just change. Coulter has been thinking out loud about switching to a worm for a while. Needham dives deep into the rear storage bin and comes up with a pack of 13 Fishing Joy Sticks. “This bait has a body segment shaped like a stickbait but it also has a tail designed to move water. It can be fished a lot of ways,” says Coulter.

The way he goes about fishing the Joy Stick on this trip is to rig it on a very light tungsten slip sinker with a swimbait hook that has a big gap. As he makes his first cast, we talk about the importance of decision making in the sport of tournament bass fishing and consider whether he just made a good choice. Coulter buzzes the bait over and around grass clumps.

A school of carp scatters in all directions and suddenly the worm gets blasted. Coulter kills the retrieve and the fish gets all of the worm. Coulter gets the fish. It’s the biggest of the day so far.

At this point Coulter has forced three frog catches and a near miss, for my camera, but we realize the worm is the way to go. Not only is it producing fast action, it is catching bigger fish than the three different frogs he has tried, which may seem a bit counter intuitive to most anglers.

Plus, the worm is versatile. “With this set up I can drop the bait on them if they short strike it,” notes Coulter. He encourages me to put down the camera and fish with him. We crushed them. For the next 45 minutes fish swatted, missed and came back for the swimming worm when we killed the retrieve. I caught a limit and a kicker. Most of them bit twice. Slowing down was not the ticket. They weren’t interested. Only a surface-bulging retrieve would trigger a response even though the fish were just playing with their food. Until it dropped right on their nose. The change in speed and direction was key. It’s a lot like the old tactic of locating bass with a buzzbait and then throwing back on them with a worm or stickbait when they miss except in this case, you have both lures at once and your bite-to-catch ratio soars.

The big girl was laid up in a foot of water. A small but rowdy worm piqued her curiosity without spooking her. In a spray of water, she missed at first but fell for the worm when it fell from the surface. I cranked the big reel handle, appreciating its length and the control it gave me during the fight. There was no doubt who was in charge of this situation. The outfit was also flexible enough to throw a nearly weightless worm long and accurate.

Bonus for MLF fans: I never committed a fish landing violation. Nor did Coulter. None of our fish hit the carpet. That’s good because as fast as they were biting, I’d hate to have to penalize myself for two minutes of that action.

Challenge conquered. Not only did Coulter provoke a few topwater bites for my camera, but a limit of bass for himself and the camera man. And all the beef jerky we could eat. 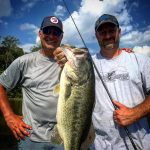