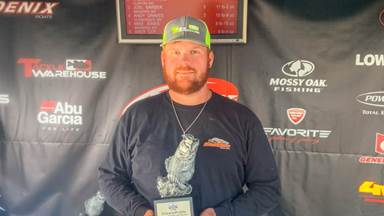 Description automatically generated“The water temperatures had dropped, so I started out throwing a spinnerbait in the morning,” said Coker, who earned his first career victory in FLW competition. “I caught a bunch of short fish, then switched over to a ChatterBait.

“When the wind picked up and the sun came out they wouldn’t hit the ChatterBait anymore, so I started swimming a jig and that is what the majority of my fish came on.”

Coker said he was mainly fishing main-lake flats in 3 feet of water. His jig of choice was a green-pumpkin and orange-colored Blacks Custom jig. He used a twin-tailed trailer with the tails dyed chartreuse.

Graves brought a 6-pound, 4-ounce bass to the scale to win the day’s Boater Big Bass award of $610.

Coy was the highest-finishing FLW PHOENIX BONUS member and took home an extra $500. Boaters are eligible to win up to an extra $7,000 per event in each Phoenix Bass Fishing League presented by T-H Marine tournament if all requirements are met. More information on the FLW PHOENIX BONUS contingency program can be found at PhoenixBassBoats.com.

Champion caught the largest bass in the Co-angler Division, weighing in at 7 pounds, 15 ounces. The catch earned him the day’s Co-angler Big Bass award of $305.

The 2020 Phoenix Bass Fishing League presented by T-H Marine on Ross Barnett Reservoir was the first of five qualifying events in the Mississippi Division.

The top 45 boaters and co-anglers in the Mississippi Division based on point standings, along with the five winners of each qualifying event, will be entered in the Oct. 8-10 Bass Fishing League Regional Championship on Lake Chickamauga in Dayton, Tennessee, hosted by the Rhea Economic and Tourism Council. Boaters will compete for a $60,000 prize package, including a new Phoenix 819 Pro bass boat with a 200-horsepower Mercury outboard and $10,000, while co-anglers will fish for a new 18-foot Phoenix bass boat with a 200-horsepower outboard.