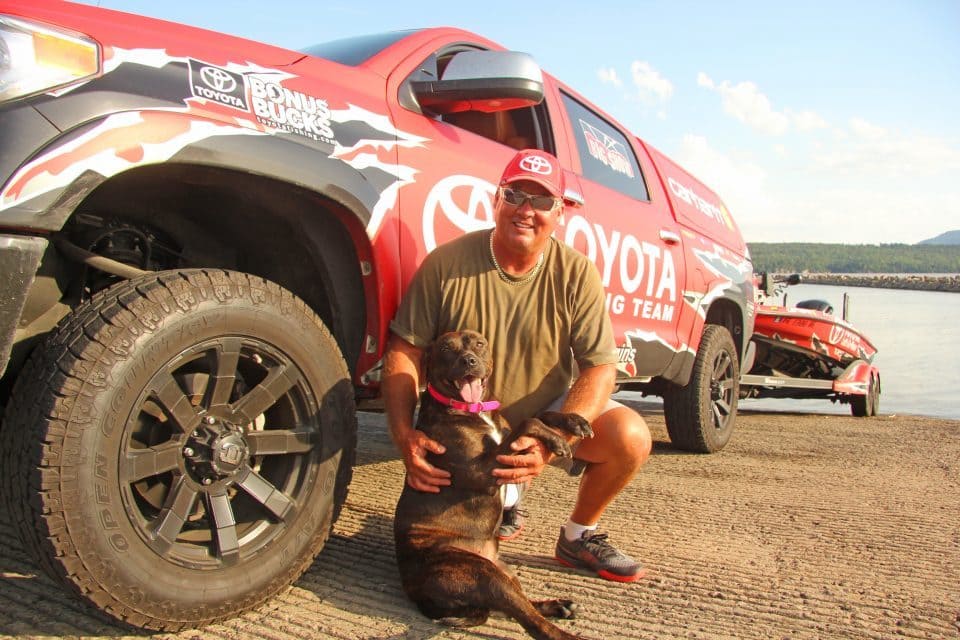 Story and Picture by Alan McGuckin

Gerald Swindle once said, “Big Show… big heart” in reference to his good buddy and Toyota teammate Terry Scroggins’ generous treatment of others. And the backstory to the four-legged friend Scroggins brought to this week’s GoPro Bassmaster Elite at Dardanelle presented by Econo Lodge proves Swindle’s theory true.

Meet “Roddie” everybody.  She’s three years old, wears a pink collar, and it’s her first trip to a B.A.S.S. event among the 204 tournaments her best friend, “Big Show”, has competed in.

She loves the Florida pro for good reason. He saved her from loneliness and abandonment on a boat ramp at Florida’s Rodman Reservoir during a crappie fishing trip with 12-time Bassmaster Classic qualifier Peter Thliveros.

“Pete and I went crappie fishing about three days in a row, and the dog would be alone at the boat ramp each day. Finally, Pete told me if she was still there when we came in from fishing on that third day, that I had to take her home with me,” says Scroggins.

“I told Pete he was crazy and that he could take her home instead of me. And actually, Bernie Schultz saw her too, but somehow I got nominated to be the one to take her.”

“Well, she was still there when we came in from fishing. So the first thing we did was take her to a veterinarian and have her scanned for an identity chip to make sure she didn’t belong to somebody. There was no chip – so at that point Pete pretty much made sure I provided her a permanent home,” says Scroggins.

In typical Scroggins’ fashion, a new home couldn’t just be a dog dish and a spot to sleep on the floor in the corner of his garage. Instead, after spending $800 to get her shots and spayed, he spent another $1,000 to build “Roddie” the Taj Mahal of doghouses. Even though, truth be told, most nights she sleeps with Scroggins. “I actually found out she has bad hips, so I’m spending $250 a month on medication to keep her comfortable.”

“She’s got a lotta pit bull in her, but you couldn’t make her bite you if you wanted to, and when another dog gets aggressive with her, she gets real submissive because all she wants to do is love everybody,” says Scroggins.

And as for her first long road trip to a B.A.S.S. event, “Big Show” says she handled it like a pro. “She laid in my Tundra from Florida to Arkansas and hardly moved a muscle.  She did awesome.”

Watching the two interact on the boat ramp at Dardanelle was a heart-warming scene. Calm and well-behaved, Roddie followed Scroggins everywhere he went as he loaded his boat and interacted with other pros coming in from a long day on this muddied-up stretch of the Arkansas River.

The scene was a fitting one too. A boat ramp in Florida brought them together, and two years later, 954 miles from Rodman Reservoir, both were proud to be spending time at Dardanelle together.

“She doesn’t like to be left at home. She and our cows nearly knock the fence down when they see my Tundra and boat coming down the road to the house after I’ve been gone a longtime at a tournament,” grins the big-hearted pro.

Something tells me this might be Roddie’s first trip to a B.A.S.S. event – but it certainly won’t be her last. 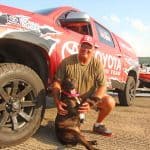