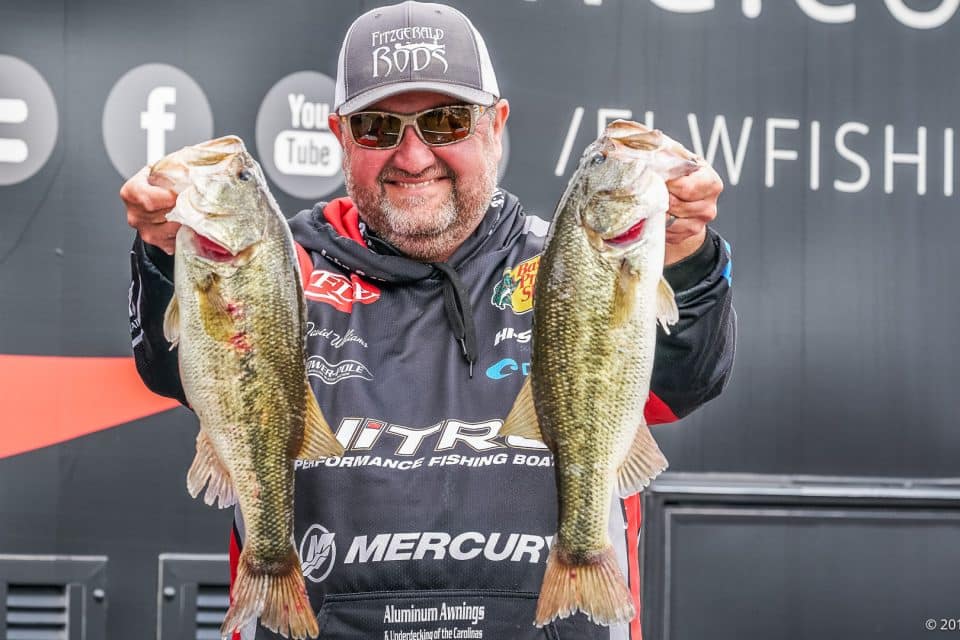 JASPER, Ala. (April 26, 2018) – Pro David Williams of Maiden, North Carolina, weighed an 18-pound, 11-ounce limit of largemouth bass to take the lead on Day One of the FLW Tour at Lewis Smith Lake presented by T-H Marine. Williams will bring a 2-pound, 9-ounce lead into Day Two of the four-day event that features the world’s premier bass-fishing professionals and co-anglers casting for top awards of up to $125,000 cash in the Pro Division and up to $25,000 cash in the Co-angler Division.

Williams worked along two 4- to 5-mile stretches of creek to catch his largemouth Thursday. He said he fished flooded cover, and that he had 40 to 50 bites throughout his day.

“I went to the area where I’d caught two big ones in practice and caught my weight pretty quickly,” said Williams, who is seeking his first career win as a professional on the FLW Tour. “I culled a few times and was basically done fishing by 10:30 (a.m.).

“They’re on a mixture of stuff – it’s not just one thing,” continued Williams. “I didn’t see anybody else in the area and I didn’t fish anything twice. I just kind of blew through it one time and left.”

Williams said he plans on returning to his two stretches Friday.

“There’s plenty of fish in there to catch a fairly decent limit. It’s just a matter of getting those big 4- and 5-pound bites,” said Williams. “I don’t know if I can catch another 18 pounds, but I can catch some fish. I’m just going to keep working them and hopefully it lasts a few days.”

The top 10 pros after day one on Lewis Smith Lake are:

Moynagh and Dobson each angler weighed a 4-pound, 15-ounce bass to tie for and split the day’s $500 Simms Big Bass award..

The top 10 co-anglers after day one on Lewis Smith Lake are:

Mark Guhne of Hixson, Texas, earned $250 for the Simms Big Bass award in the Co-angler Division with a 4-pound, 2-ounce bass.

In FLW Tour competition, pros and co-anglers are randomly paired each day, with pros supplying the boat, controlling boat movement and competing against other pros. Co-anglers fish from the back deck against other co-anglers. The full field of anglers competes in the two-day opening round. Co-angler competition concludes following Friday’s weigh-in, while the top 30 pros based on their two-day accumulated weight advance to Saturday. Only the top 10 pros continue competition Sunday, with the winner determined by the heaviest accumulated weight from the four days of competition.

The total purse for the FLW Tour at Lewis Smith Lake presented by T-H Marine is more than $930,000. The event is hosted by the Chamber of Commerce of Walker County

Prior to the weigh-ins Saturday and Sunday, April 28-29, FLW will host a free Family Fishing Expo at the Smith Lake Dam Access from noon to 4 p.m. The Expo is the perfect opportunity for fishing fans of all ages to meet their favorite anglers, enjoy interactive games, activities and giveaways provided by FLW sponsors, and learn more about the sport of fishing and other outdoor activities.

Also for youth, the FLW Foundation’s Unified Fishing Derby will be held at the Smith Lake Dam Access on Saturday, April 28, from 9-11 a.m. The event is hosted by FLW Foundation pro Cody Kelley along with other FLW Tour anglers, and is free and open to youth (18 and under) and Special Olympics athletes (all ages). Rods and reels are available for use, but youth are encouraged to bring their own if they own one. The 1st and 2nd place anglers that catch the biggest fish will be recognized Saturday on the FLW Tour stage, just prior to the pros weighing in.

Television coverage of the FLW Tour at Lewis Smith Lake presented by T-H Marine will premiere in high-definition (HD) on NBC Sports Network (NBCSN) June 6 from Noon-1 p.m. EST. The Emmy-nominated “FLW” television show airs on NBCSN, the Pursuit Channel and the World Fishing Network and is broadcast to more than 564 million households worldwide. 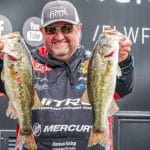