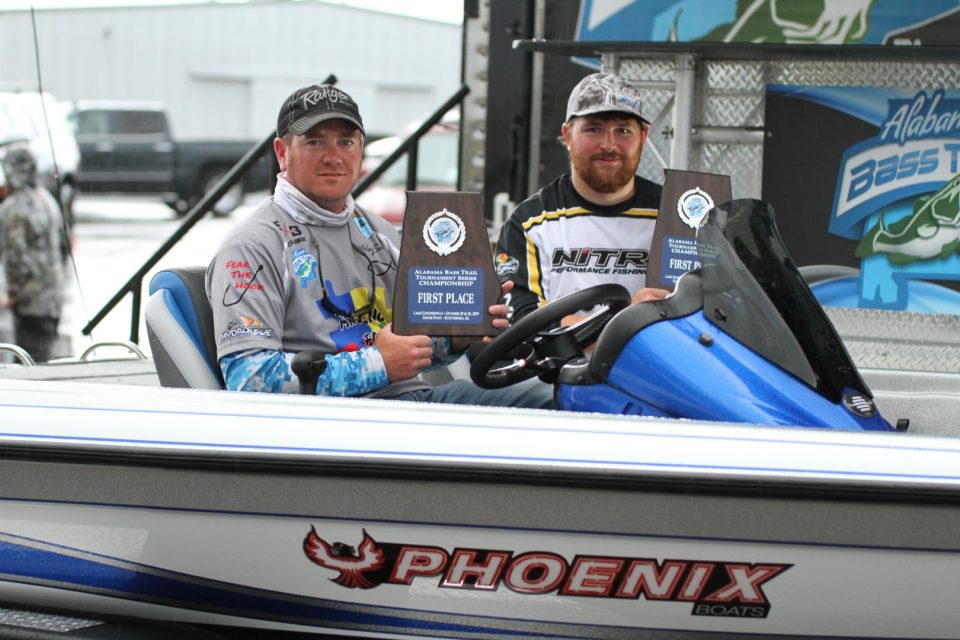 Pair Moves from 13th place to victory on Day Two

October 26, 2019 – Scottsboro, Ala. – The weather managed to throw several monkey wrenches into everyone’s plans at the 2019 Alabama Bass Trail Championship event at Lake Guntersville out of Scottsboro, Alabama’s Goose Pond Colony.  With driving rains, falling water temperatures and heavy winds the theme for the event, no amount of prognosticating could predict the final outcome.

Along with the crapshoot of conditions, no amount of home field advantage could guarantee that anyone would play the favorites to win the Phoenix 819 Pro, 200 horsepower powered, Garmin and T-H Marine accessorized prize package; valued at more than $50,000.

As it turned out, the Smith Lake expert team of Wesley Sams and Jordan Wiggins brought their experience and a never say die attitude to move from 13th place on day one to leap to the lead and take the win with a total weight of 34.26 pounds. “This is absolutely amazing,” the longtime team pronounced.  “This (winning a boat) is something we’ve wanted to do for a very long time, and it’s absolutely amazing to be standing here having won this event.”

The win didn’t come easily.  The weather made fishing tough on most of the field, however, when the weights are relatively low, there is room for a team to make up ground, and other teams to stumble.  That scenario played out perfectly, as day one leaders Joe McElroy and Chase Freeman couldn’t mimic their 22.10 pound limit, and the majority of the top teams stumbled, leaving the door open for Sams and Wiggins.

The pair produced 16.34 pounds on day one, then added 17.92 pounds on the final day to jump to the lead, then hold serve as the final 10 anglers came to the scales.  They reported making long runs to the area around the Highway 431 bridge in the town of Guntersville, and catching the majority of their fish in one stretch.  “We caught nine of our 10 fish that we weighed in one 50-yard stretch,” they said.  “We caught most of them on Green Pumpkin Shad Jackhammers with matching Yamamoto Zako swimbaits as trailers.  We also caught a few fish on a 5-inch white Zoom swimbait rigged on a belly weighted hook, retrieved across the grass.”

The pair was visibly shocked with their finish, but knew they had a chance at the start of the day.  “We can’t believe this, but at the same time, knew there was a chance when we left this morning,” they reported.  “This is something we’ve wanted for so long and it feels absolutely amazing to be standing here now knowing we’ve won – it’s just absolutely amazing.”

The team of Mark Meyer and Ty Campbell made the most remarkable move of the day, catching 20.20 pounds and leaping from 33rd place to finish second for the event with 33.75 pounds.  The pair said that they figured out their best pattern late on day one.  “We caught our fish on bladed jigs and spinnerbaits around docks that had green grass on them,” they said.  “We’re obviously very happy with how today went, but if we would have figured it out a little earlier, we might have done better yesterday.  But, we did the best we could today, and gave ourselves a chance.  We’re pleased with the result, and happy for Wesley and Jordan.  We’re from the same area, so it’s cool to see them win.” Meyer and Campbell earned $5,000 for the event.

Despite their hiccup on day two, McElroy and Freeman managed to finish the event in third place on the strength of their heavy day one bag – which included the 6.85-pound Mountain Dew Big Bass of the event. That $500 bonus, and their fourth place prize earned tem $4500 in earnings for the weekend. The father / son team of Kyle and Luke Glasgow produced consecutive 16-pound limits to finish fourth with 32.61 pounds; earning $3,000.  They narrowly edged out Greg and Jeremy Tomlin, who earned $2500 in fifth place with 32.51 pounds.

Top 10 finishers are below, for complete standings go to: https://www.alabamabasstrail.org/tournament-series/lg-results/ 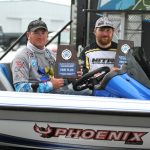