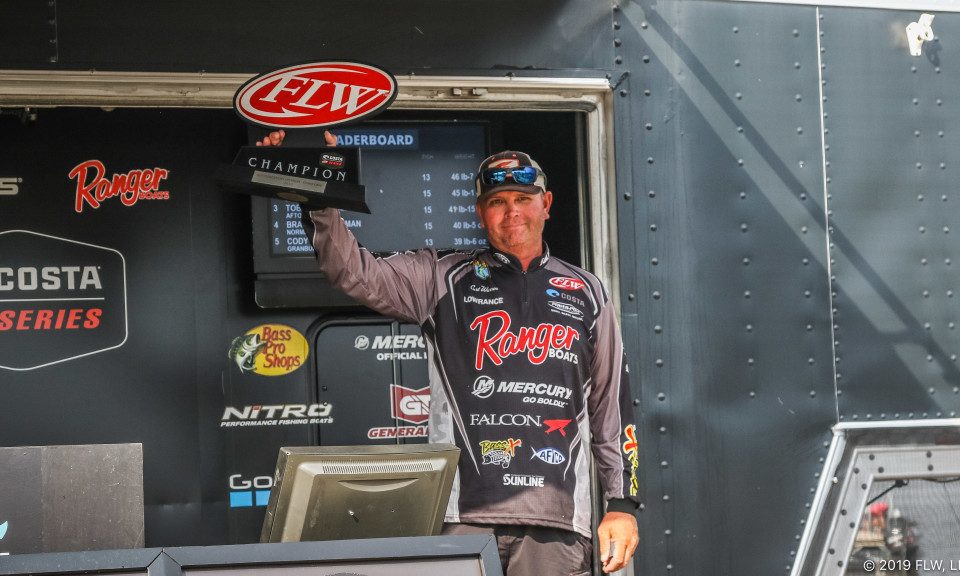 GROVE, Okla. (Oct. 5, 2019) – After starting the day in third place, pro Curt Warren of Rose, Oklahoma, caught a five-bass limit Saturday weighing 15 pounds, 9 ounces, to vault to the top of the leaderboard and win the three-day Costa FLW Series at Grand Lake presented by T-H Marine.

Warren’s three-day total of 13 bass weighing 46 pounds, 7 ounces was enough to earn him the victory by a 1-pound, 6-ounce margin over second-place pro Jason Christie of Park Hill, Oklahoma, and earn him the top prize of $77,175, including a brand new Ranger Z518L boat with a 200-horsepower Evinrude or Mercury outboard. The tournament was the third and final regular-season tournament of the year for anglers competing in the Costa FLW Series Southwestern Division.

“I didn’t have a whole lot of boat pressure around me, because I think that I was fishing much deeper than most,” said Warren, who had one previous win on Grand Lake – a Bass Fishing League (BFL) tournament in 2017. “I wasn’t really doing anything special. I was just fishing from mid-lake to the dam, fishing fall transition stuff – big chunk rock and fresh green brush.”

Warren said he did most of his damage this week throwing a Bass X ¾-ounce football jig (kicker craw), with a Netbait Paca Chunk (green-pumpkin) or Strike King Rage Craw (watermelon candy), although he did mix in a Zoom Brush Hog Saturday. He also caught two suspended fish on a ½-ounce shad-colored spinnerbait that he brought to the scale.

“I only had four fish on each of the first two days – although I lost a 2½- to 3-pounder Thursday – but today I caught five and I probably lost another five,” Warren said. “I’d been catching a few early and a few later in the day. Today, it was nothing early and then from 1:30 on I caught everything that I weighed.

“I think the key to my win was my equipment and gear,” Warren went on to say. “I was fishing a Falcon Rods Expert Series ‘Amistad’ Extra Heavy rod and it is really an ideal rod for the football jigs that I like to use. My line was just as important – I was throwing 22-pound-test Sunline Shooter Fluorocarbon. With it, I can feel anything.”

Christie caught the largest bass of the tournament Thursday on a buzzbait, weighing 7 pounds, 7 ounces and earning him the day’s Boater Big Bass award of $192.

Steven Meador of Bentonville, Arkansas, won the Co-angler Division Saturday with a three-day total of 11 bass weighing 27 pounds, 15 ounces. For his win, Meador took home the top prize package of a new Ranger Z175 boat with a 115-horsepower outboard motor, worth $27,100 and a $5,000 Ranger Cup contingency bonus.

Pattillo caught the biggest bass of the tournament in the Co-angler Division Friday, a fish weighing 5 pounds, 6 ounces. He earned the day’s Co-angler Big Bass award of $128.

The Costa FLW Series on Grand Lake presented by T-H Marine was hosted by the City of Grove. It was the third and final tournament in the 2019 regular season for Southwestern Division anglers. The next tournament for FLW Series anglers will also be the Central Division finale, the Costa FLW Series at Table Rock Lake presented by Evinrude, held Oct. 10-12 in Osage Beach, Missouri. For a complete schedule, visit FLWFishing.com. 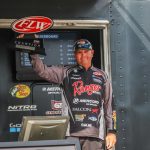