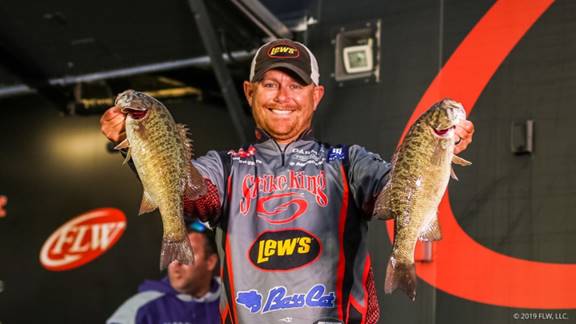 BURNSIDE, Ky. (Nov. 1, 2019) – Strike King pro Andrew Upshaw of Tulsa, Oklahoma, crossed the stage Friday with a five-bass limit weighing 15 pounds, 1 ounce, for a two-day total of 10 bass weighing 30 pounds even, to lead after Day Two of the Costa FLW Series Championship on Lake Cumberland. Upshaw now holds a 1-pound, 13-ounce lead over pro Rob Burns of Plano, Texas, who weighed five bass totaling 14-10 – for a two-day total of 10 bass for 28-3 – in the FLW Series championship event that featured 193 boaters and co-anglers competing a top cash award of up to $100,000 on the pro side, including the keys to a new Ranger Z518L boat with a 200-horsepower outboard.

The field is now cut to just the top 10 boaters and co-anglers for the final day of competition in the no-entry fee bass-fishing championship, hosted by the Somerset Tourist & Convention Commission and the Burnside Tourism Commission, that featured the top 40 professionals and top 40 co-anglers from each of five U.S. FLW Series divisions, plus two pros and two co-anglers from each international country that competes in the FLW Series.

“I love smallmouth and I love fishing these types of Kentucky reservoirs – Lake Cumberland and Lake Cherokee,” said Upshaw, who earned the first FLW Tour victory of his career earlier this season on Lake Cherokee. “I feel like I have a pretty good understanding right now on how the fish are set up on cover, and that is helping me a lot.”

Upshaw said that he caught around 18 keepers today, with his first bite coming around 9:45 a.m.

“I knew that the first hour and a half was going to be slow,” Upshaw said. “The way I’m fishing, it’s a timing thing. I had to be there at the exact right time. It’s not necessarily a spot, though. I’m running a pattern. I found three or four other areas today that had them on it.”

Although Upshaw did not mention any specific baits that he threw on Day Two, he did say that he caught them Thursday on a buzzbait, a Ned rig and a jig. He thinks that the fish are actually already moving into their wintertime patterns.

“The way the fish are setting up, it’s almost more of a wintertime pattern than fall,” he said. “I’m fishing really slowly and thoroughly and that is a big key. I’m just keeping a couple of rods in my hand and just going fishing. I have a lot of confidence from how they’re setting up.

“I don’t think I’m going to have any problems tomorrow,” Upshaw went on to say. “If I can just go out there and put my head down and go fishing, I think I’ll be fine.”

The top 10 pros that advanced to the final day of competition on Lake Cumberland are:

Mason Roach of Conroe, Texas, added to his lead in the co-angler division with four bass weighing 8 pounds, 2 ounces. His two-day total of nine bass totaling 21-5 gives him a strong 4-pound, 10-ounce lead over Jason Clark of Bixby, Oklahoma, who has weighed eight bass totaling 17-11, good for second place. Co-anglers are casting for a top prize of $35,000, including a new Ranger Z175 with a 115-horsepower outboard.

The top 10 co-anglers that will fish the final day on Lake Cumberland are:

The final 10 boaters and co-anglers will take off from General Burnside Island State Park, located at 8801 S. Hwy. 27 in Burnside, at 8 a.m. EDT Saturday. Saturday’s Championship weigh-in will be held at the State Park beginning at 4 p.m. All takeoff and weigh-ins are free and open to the public.

The popular FLW Live on-the-water program will air on Saturday featuring live action from the boats of the tournament’s top pros each day. Host Travis Moran will be joined by four-time FLW Tour Angler of the Year, Polaris pro David Dudley to break down the extended action from 8 a.m. to 2 p.m. On-the-water broadcasts will be live streamed on FLWFishing.com, the FLW YouTube channel and the FLW Facebook page. 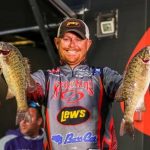