The Power (Fishing) of Braid

The What, When, and Where of Fishing Low-Vis Braid to Up Your Big Bass Odds

Louisville, KY (March 7, 2019) – If you’re like a lot of anglers, then you frequently wonder about the what, when, and where of fishing braid over monofilament or fluorocarbon on big bass waters. You’re not alone. Choosing the right line for the presentation and application is indeed a large part of the big fish formula.

That said, we caught up with Alabama-based pro bass angler Mark Daniels Jr. while prepping for the biggest bass tournament on the planet, the upcoming Bassmaster Classic in Knoxville, Tennessee. Like a lot of other anglers, he was carefully considering how he was going to fish and what line was best for dozens of baitcasting reels he was busy spooling with various Seaguar line.

For the sake of this piece, Daniels focuses purely on power fishing techniques with baitcasting gear but is quick to mention that Seaguar braid has become standard on his finesse spinning gear, too, typically with a fluorocarbon leader. “First, let’s talk about the line itself. It’s my opinion that Seaguar Smackdown Braid—whether it’s Hi-Vis Green or Low-Vis Stealth Gray—is bar none the best casting line out there. It’s smoothness is unparalleled and it’s incredibly symmetrical, very round, and that’s where you get the smoothness from. It’s not grinding in your guides, which for me is a big turn-off, because I feel like a lot of times other lines can damage your rods. But you don’t have that with the Seaguar Smackdown Braid—it’s an eight-strand woven braid, the basis of that symmetry, and why it just fishes smooth and casts great,” says Daniels.

When it comes to techniques, Daniels says he’s fishing braid more and more all the time, especially now that there’s a low visibility option in Seaguar Low-Vis Stealth Gray Braid. From topwaters to flipping, to ripping Rat-L-Traps through grass, as well as chatterbaits and swimjigs, he says the majority of the rods and reels on the deck of his boat are spooled these days with Seaguar braid.

“As far as the applications go, there are a host of techniques where braid excels. I’m a guy, anytime I’m fishing a topwater, I’ve got Seaguar Smackdown Low-Vis Stealth Gray braid on. Years past, I used to use a lot of monofilament with topwaters, but in my opinion, monofilament’s pretty much obsolete. The little bit I do have laying around the house I use as filler backing whenever I’m putting some different line on top. I’m not using it whatsoever. But topwaters, absolutely, braid is my choice. Whether it’s a walking-style bait, a frog, a buzzbait, my go-to set-up is going to be the Stealth Gray. With my walking-style baits like a popper or a Zara Spook, I’m going to go with 40-lb. braid; with my frogs and buzzbaits—any big baits where I’m liable to encounter a lot of heavy cover – or I might be throwing a big wake bait or a rat—I’m going to go with the 50-lb. Stealth Gray.”

He continues: “Other applications to use Smackdown Low-Vis Stealth Gray braid include flipping in heavy cover where the water may be a bit more clear than normal, but it’s still too thick to feel comfortable with fluorocarbon. 50-lb. test would be my recommendation. It just blends into the environment; camouflages really well. So you’re able to maintain a stealthy approach.”

Daniels is also a big fan of braid for the highly-specialized technique of ripping Rat-L-Traps through the grass, like what anglers encounter on waters like Sam Rayburn and Lake Guntersville, but is certainly an approach that will work on other grass-populated waters coast to coast.

“There are some situations when I’ll throw a Rat-L-Trap on braid. My recommendation there is 40-lb. Low-Vis Stealth Gray Smackdown. With this technique you’re making super long casts and without braid you can’t get that bait to pop out of the grass and trigger a strike like you need to. So that’s  a situation when I’d go with braid, but you want to make sure you’re using a softer rod because we all know with those treble hooks you can lose a lot of fish with the technique.”

Akin to that is Daniels’ approach to fishing chatterbaits in areas with heavy grass.

“If the grass is really thick, like on Okeechobee or Toho, I’ll use braid instead of fluorocarbon with a chatterbait. I need the action of the chatterbait on a long cast, which braid necessitates, and as soon as it encounters grass I need to get it out of that grass. Smackdown will keep it tracking true so I can get that bite.”

Daniels is also open to sharing an under-the-radar technique that’s won him a lot of money over the years, and that’s fishing swim jigs in a unique way that also makes braid a perfect choice.

“I’ll also use braid with a swim jig. I’ll fish a swim jig probably different than a lot of anglers; I I put them way back in the nasty, thick stuff and almost hop ‘em like a frog, just a little bit sub-surface and work through a lot of thick vegetation. It’s a technique I absolutely love to fish around lily pads, any kind of water vegetation like water hyacinth, water primrose, water willow—there are so many different kinds of grasses that live in these lakes—but I’ll swim a jig through that stuff constantly popping it and 50 lb. Smackdown Low-Vis Stealth Gray is definitely my go-to line for this.”

Looking forward to the Bassmaster Classic, Daniels says he definitely hopes the fish are coming along in the pre-spawn stage and the relentless rain and flooding quits to give anglers some stable conditions on the water. Whatever the case, know that Daniels will be pre-fishing soon and guarantees he’ll be fishing techniques where Seaguar’s new Smackdown Low-Vis Stealth Gray braid will undoubtedly come into play. 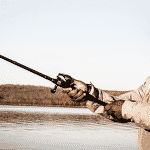 The Power (Fishing) of Braid