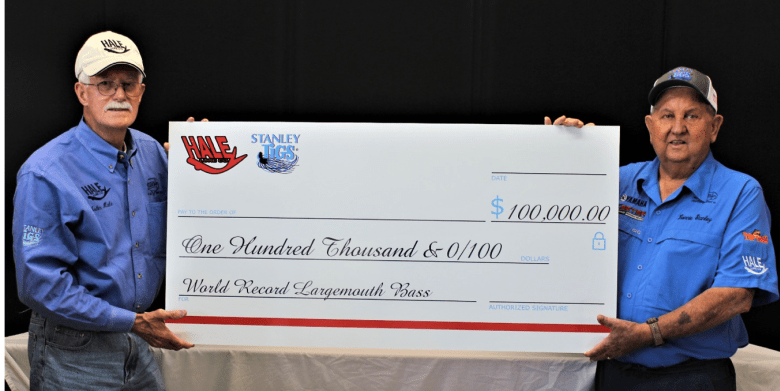 HUNTINGTON, TX. – Hale Lures/Stanley Jigs, a leading manufacturer of trophy bass tackle, is putting their money behind their reputation. Effective January 1, 2019, through December 31, 2019, any angler catching a new state record largemouth bass that exceeds the weight of the current record bass exceeding 22lbs. 6oz on any Stanley Jig bait or Hale Lure bait will collect $100,000.00 in cold, hard, American cash.

Register at www.fishstanley.com. There is no cost to enter.

Since the company’s founding nearly 40 years ago, Stanley lures have accounted for multiple state record and teen-class fish, including the world-famous Ethel, a 17.86 pound monster caught by Mark Stevenson on a Stanley Jig and a Hale Craw combo on Lake Fork in 1986. They’re not just for giants, though. They’ve also been responsible for hundreds of tournament victories across the country and across the world and have played a major part in at least two Bassmaster Classic wins.

“We have already caught so many monstrous bass on Stanley Lures, why not a world record?” company CEO John Hale asked.

Despite Stanley’s storied history and firm status in every serious bass fisherman’s boat, we continue to innovate, with recent creations like the Big Nasty Jig, New Mud Puppy, and Awesome Twin Spin making a major stir in the tournament world.

“With the new baits we have added to our lineup, we feel you even have a better chance to catch a fish of a lifetime,” said company founder Lonnie Stanley.

This a free contest that runs from January 1, 2019, till December 31, 2019. For more details and a complete set of rules, go to www.fishstanley.com and register immediately.