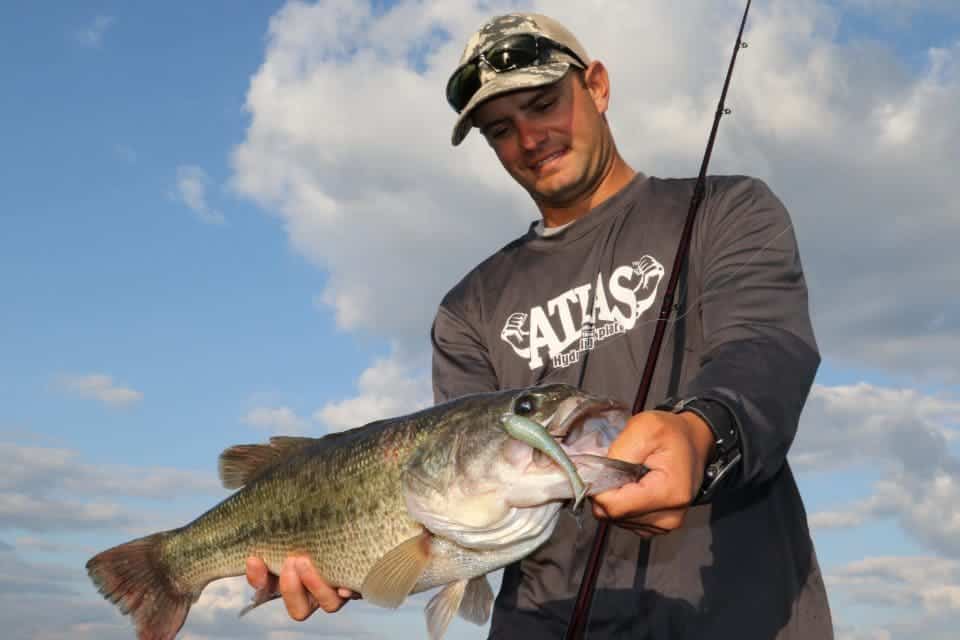 By David A. Brown
Spend any time around Matt and Jordan Lee and you’ll quickly realize two resolute points: The brothers from Alabama are straight-up fish heads and they’re a couple of the bass world’s most down-to-earth dudes.

As such, they’ve already made their summer plans; and whether they’re competing in Bassmaster tournaments or floating around their Lake Guntersville home waters, the Lee brothers’ playbook can help you catch more fish this summer.

Here’s a look at what they’ll be throwing: 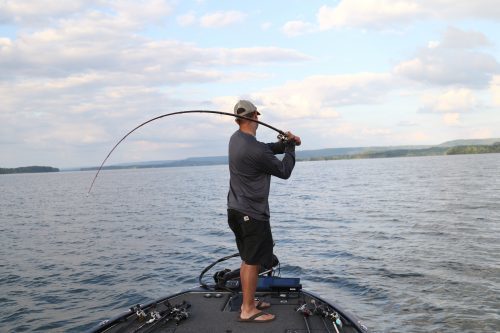 Long rods with plenty of flex, distant casts to deep fish — nothing says summer in the south like a good old-fashion reaction bite. Matt’s an ace at this game and much of his prowess comes from observation.

“When the fish are grouped up in deep water, it’s rewarding to me to finding fish on electronics; in fact, a lot of times, I don’t even make a cast unless I see fish on my graph,” he said. “Understanding what you see on the graph is important. You can tell species, but a lot of times, how they’re positioned will show what baits they’ll bite.

“Normally, if they haven’t been messed with, they look like Tic-Tacs on the bottom; it looks like you took a Sharpie pen and dotted the graph. In the summertime, largemouth bass will relate to the bottom structure. They’re on breaks, they’re above the break, they’re down the side of a ledge. Rarely, will you see them suspended out in open water before you get to a ledge.”

What to Wind: When he finds unmolested fish, Matt loves winding a Strike King 10XD through the meat. A busy holiday weekend may not offer much of this and in such times, he’ll shift to finesse baits. But when the fish amass in tight bunches, amplified feeding competition means catching them on every cast and that’s straight-up fun.

“That male ego thing kicks in and you want to channel your inner Kevin VanDam for a minute,” Matt grins. “The best way you can learn to do this is to go somewhere the fish bite this way — go to Pickwick, Kentucky Lake, Guntersville and go on a weekday when it’s not as crowded. Go somewhere you can get bites and learn this technique.”

Calling the 10XD and 6XD his “go-getters,” Matt said he fits his crankbaits with the round bend Owner ST36 trebles — as big as a No. 1 on the 10XD. Fish occasionally slap at big cranks and these beefy hooks tend to snare more of the indecisive ones.

“I try to get more bites by throwing my crankbait on a higher speed reel,” Matt said. “I think the days of throwing these baits on low-speed reels are few and far between because of how much pressure they get.

“I will throw them on a 6.6:1 with a big handle and reel it really fast. It will wear you out, but it makes a difference.”

When the crankbait bite dwindles, Matt will clean up with a Strike King Rage Swimmer swimbait on a 1/2- to 3/4-ounce swimbait head. A different profile and action than the common hollow belly swimmer seems to do a better job triggering fish.

KIND OF A DRAG

Jordan loves the reaction baits too, but he offers good advice for effectively employing the plastics.

Shaky Head: This is one of Jordan’s go-to summer baits, but we’re not necessarily talking about the light finesse stuff. There may be occasions for that too, but his typical deal is a beefier presentation with a Strike King Bull Worm — something a bass would invest the energy into eating this time of year. 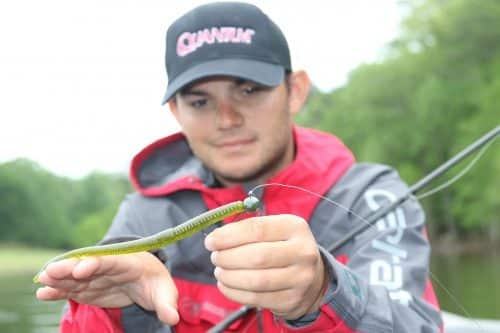 “If the wind’s blowing hard or if I’m deeper in 15-25 feet, I’ll throw a 3/4-ounce head; and under that, I’ll throw a 1/2-ounce,” the reigning Bassmaster Classic champ said. “I like this bait anytime I’m fishing brush piles, shell bars or any place the fish are out deeper grouped up. It’s just a different look than a traditional Texas rig.”

Jordan’s best advice: Throw this bait on 17-pound Seaguar AbrazX fluorocarbon but don’t over-fish the bait. You just want a slow drag without the rod tip wiggling more common to smaller versions of this bait. Think football head and you’ll have this right.

“Let the worm do more than your rod tip,” Jordan says. “Instead of giving it a lot of action, it seems to work better for me when I just drag is as slowly as I can.”

Notably, Jordan prefers the 8-inch Bull Worm. He keeps 10-inchers handy for when he’s around legit toads, but day-to-day, the smaller version — which is still a sizable offering — will catch a wide range of sizes. 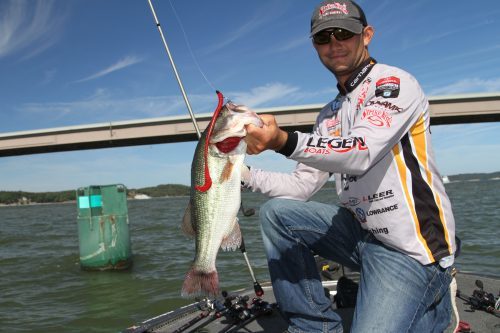 Wobble Heads & Texas Rigs: For a more enticing display, something that might nudge a big heat-weary fish into sucking in one easy meal, Jordan will throw a 8-inch Strike King Rage Recon worm or a 10-inch Strike King Thumper Worm. For this, he has a couple different rigging strategies.

“I’ll rig these worms on a 3/4-ounce Strike King Jointed Structure Head (articulated) because this gives it a different action,” he said. “With a traditional Texas rig, it just lays on the bottom and it doesn’t have a lot of movement. Everybody has thrown it for years and it still catches fish, but I think the Structure Head shows them something they’re not accustomed to seeing.”

Indeed, that articulated look serves him well for slowly rumbling across hard bottom where every bump and drop makes that big worm shiver and shake. At times, Jordan will balance the show with an old school Texas rig.

“I like throwing this around brush piles because you can come through stuff easier and it doesn’t hang up as much like a shaky head would,” he said. “That worm weight just slides through cover easier.

“If your lake has a lot of brush or wood, that’s when you want to throw a Texas rig more than the wobble head or shaky head. When you don’t get hung up as much, you fish more efficiently.” 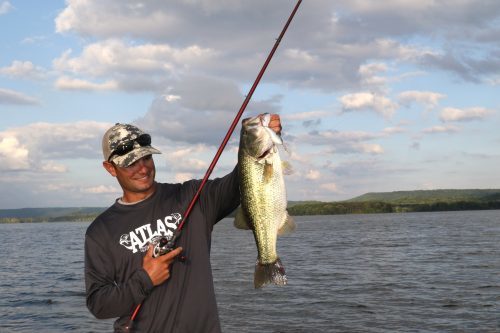 Not surprisingly, there’s a good bit of crossover between what Matt and Jordan fish during the summertime, but the key for both is preparation through diversity. As Jordan notes, he spends a lot of time searching for fish with a Carolina rig before turning to his more targeted presentations.

“When the fish get out offshore, it’s so important to have a ton of different baits, from a spinning rod rigged with a dropshot, to swimbaits, 6XD crankbaits and all the worms I mentioned,” Jordan said. “The fish always are going to want one bait better than another. You can be on a great pile of fish, but if you’re not throwing the right bait in there you might not catch a fish.

“You really won’t understand why a lot of times; there’s really not any conditions that say ‘This bait’s gonna be better.’ A lot of times, it’s just fishing and figuring out what the fish want. That’s why you need to have so many baits rigged up. When they start eating something really good, you know you have the right one.” 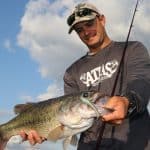