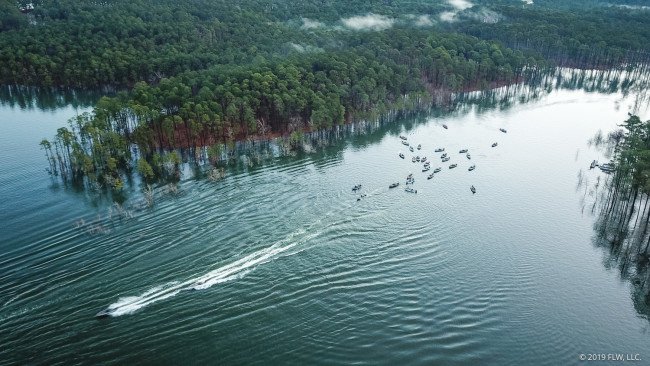 The Corps of Engineers impounded the Angelina River in the mid 1960’s, giving birth to Lake Sam Rayburn which sprawls over 114,500 surface acres making it the biggest lake wholly contained in the Lone Star State. Fifty-five years later Big Sam still turns out big bass and bunches of them.

Hydrilla is the primary cover as winter bass begin to stage along its inside edge in preparation for a move to the spawning flats in coming weeks.

Here’s the official Texas Parks and Wildlife report on the current state of bass fishing on Rayburn, as of January 1, 2020:

Sounds about right for this time of year.

The FLW Pro Circuit will visit the famous lake with competition dates stretching from January 23 to  January 26.

If conditions are indeed ‘normal’ on Rayburn in late January, look for the traditional ‘trap’ bite in 5 feet or less, which, apparently qualifies as ‘deep’ water for Louisiana guys – check out this quote from Kevin Lasyone of Dry Prong, LA who won the recent BFL on Rayburn: “I was basically fishing grass in three to five feet of water early, then I went shallow and finished out my day.”

The report, courtesy of our friends at FLW Fishing.com, continues: Lasyone said he caught most of his fish on a Rat-L-Trap and a V&M Lures swimbait with a Lazyman weighted swimbait hook. He also added a few keepers with a Yamamoto Senko.

“I think the key to my victory was all of the time that I have spent on Rayburn over the years,” Lasyone went on to say. “The big ones really seemed to pull up when the sun came out, and they were up pretty shallow. I was fishing water that was only about knee deep, but it had to have grass.”

Lasyone won the single day event with 20 pounds, 8 ounces. Nobody else broke the 19-pound mark. And there were 230 boats with co-anglers, so Rayburn isn’t on fire yet. That may be good news for pros who want it to fire off for them later this month.

Word is, the hydrilla is a tad thin and fish are concentrated in predictable areas. This should produce a bunch of 15-to-17-pound bags and a handful of much heavier stringers when the FLW anglers arrive.

Terry Bolton won the FLW tourney on Rayburn last January with a total weight of 91 pounds, 3 ounces over 4 days. His Day 2 catch alone weighed an impressive 33-9. Crankbaits, fished along offshore humps that held grass in about 10 foot depths, were Bolton’s primary weapon.

That event ended on January 10th – a couple of weeks earlier than this year’s tourney and the lake was flooded super high, a confounding riddle that many anglers could not solve.

This year the lake is down a couple of feet. Still, crankbaits and other offshore favorites such as worms – Texas-rigged and Carolina-rigged –  should play a big role.

Offbeat tactics will show up as well. Sometimes a guy can win with one. Nick LeBrun made a good charge at Bolton’s lead and finished runner-up with 90-7 by slow-rolling a big spinnerbait that sported a single Colorado blade.

The situation last year was that water got so high on the lowland impoundment that many bass scattered too far back into the woods and anglers could not get a lure in front of them. The ones that stayed offshore were prime for the picking – if you could find them. Big fish were bunched in small spots for those did find them and those guys brought in huge sacks.

This year expect a more level leaderboard but exciting weights just the same. The FLW Pro Circuit is about to kick off 2020 – ‘the year of clear vision’ -with a spectacle!

For a detailed look at the lake, check out Anglerschannel.com’s ‘Lakes’ tab. Then see the action unfold on live FLWFishing.com! 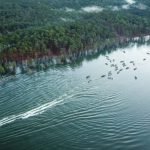