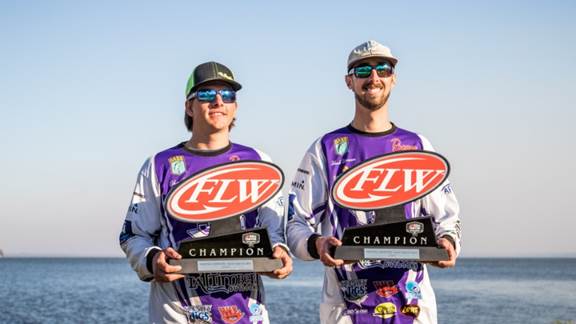 LEESBURG, Fla. (Feb. 28, 2020) – The Stephen F. Austin State University duo of Christopher Harrison and Ethan LeGare weighed a five-bass limit Friday totaling 20 pounds, 8 ounces to win the 2020 Abu Garcia College Fishing presented by YETI National Championship presented by Lowrance at the Harris Chain of Lakes. The win earned the Lumberjacks’ bass club a $33,500 prize package, including a new Phoenix 518 Pro bass boat with a 115-horsepower Suzuki outboard and automatic entry into the 2020 Toyota Series Championship, Nov. 5-7 on Lake Cumberland in Burnside, Kentucky, where they will compete for a top prize of up to $235,000.

As the weigh-in concluded, it originally appeared that the McKendree University team of Nathan Doty and Jacob Louis were the winners. It was later determined, however, that the pair had inadvertently violated Rule No. 12, which states in part that all fish must be caught in a conventional sporting manner, and their day three catch was disqualified.

The team broke off a bass and approximately an hour later snagged a line. They pulled in the line, which had a bass they believed to be the one they had broken off, hooked to a lure they believe to be their original lure. There is no way, however, to know if the fish on the line was the original fish that broke off, nor was the fish hooked with a rod and reel in a conventional sporting manner when it was brought into the boat. Thus, their catch was disqualified. McKendree University finished in 8th place with a three-day total of 10 bass weighing 42-12.

“We definitely have mixed feelings right now, but at the end of the day FLW made their decision and we’re excited to be the National Champions,” said LeGare. “The whole experience this week has been a once in a lifetime event.”

“It’s been an incredible week here,” said Harrison. “We went out there today with nothing to lose and busted a big bag. My psyched level is through the roof right now.”

The Texas duo said that they caught their fish targeting grassy flats on points, next to spawning pockets. They had spots in Lake Beauclair, Lake Dora and Lake Eustis.

A 6th Sense squarebill and 6th Sense Provoke jerkbait got it done for the duo on day one. On day two, the cold front forced the team to slow down and they switched to a split-shot rig and Texas-rig with either a Zoom Salty Super Fluke (watermelon red) or soft plastic stick worm (California 420 with gold fleck). Today, they kept things finesse and added a Carolina rig with a ¼-ounce weight and drop-shot to the mix.

“The key this week was keeping our heads down, slowing down and adapting,” said LeGare. “We knew we had the areas to well in this tournament, we just had to pick them apart and today we did that. We didn’t give up and we fished until the last second.”

Along with their Phoenix boat, the pair also advances to the Toyota Series Championship this fall on Lake Cumberland.

“I don’t have a single bit of an idea of where Cumberland is,” laughed Harrison. “I promise, give me two weeks and ask me again and I’ll know something about it. We’re very excited.”

The top 10 teams on the Harris Chain of Lakes finished:

Full results for the entire field can be found atFLWFishing.com.

Overall there were 38 bass weighing 106 pounds, 10 ounces caught by the final 10 college teams Friday. Five teams brought a five-bass limit to the scale.

The Abu Garcia College Fishing presented by YETI National Championship presented by Lowrance on the Harris Chain of Lakes was hosted by Lake County, Florida.

The three-day event featured the top college bass fishing teams from across the nation competing in an internationally televised, no-entry fee tournament for a $33,500 prize package, including a new Phoenix 518 Pro bass boat with a 115-horsepower Suzuki outboard. In addition to the boat package, both members of the winning team now advance to the 2020 Toyota Series Championship, Nov. 5-7 on Lake Cumberland in Burnside, Kentucky, where they will compete for a top prize of up to $235,000. 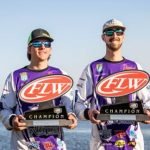