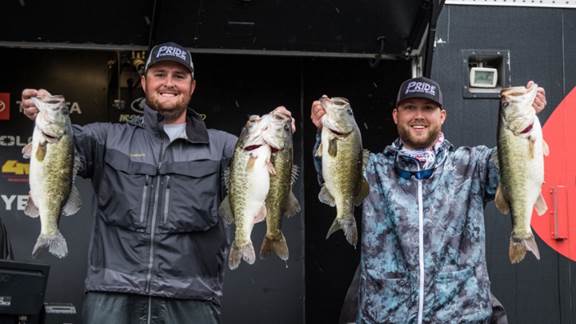 “It’s Bryton’s 24th birthday today, and I was joking with him this morning saying ‘Wouldn’t it be awesome if we caught 24 on your 24th?’, said Carrell, a senior majoring in Agricultural Engineering. “We caught six of the right fish today, and hopefully we can do it again tomorrow.”

Although they didn’t want to divulge much information after just the first day, the duo did say that they had their most success Thursday in one canal. They caught one fish early off a bed, but the rest were caught off one 150-yard stretch in a 700-yard canal.

“We had missed a couple of bites this morning, and we only had one 12-inch squeaker in the boat at 10 o’clock, so we decided to just go fishing,” said Kurtz, also a senior majoring in Agricultural Engineering. “We rolled into the canal where we had a couple of bites in practice, and Jackson got bit fairly quickly. Then I pitched right back in there and got a 4-pounder.

“We kept on fishing, bite-after-bite on this 150-yard stretch,” Kurtz continued. “We were done after we caught our limit.”

The Texas team said that they caught all their fish on just one bait. They remained tight-lipped on specifics but mentioned that each were throwing a different color. They hope that their bite can hold up for the rest of the week, despite the cooler temperatures being forecast.

“This is our first time to Florida, so we don’t know exactly how the fish are going to react,” Carrell said. “Hopefully the cold temps don’t make them back out of the canal too far, and the fish will be coming back in to that spot.”

The three-day event features the top college bass fishing teams from across the nation competing in an internationally televised, no-entry fee tournament for a $30,000 prize package, including a new Phoenix 518 Pro bass boat with a 115-horsepower outboard. In addition to the boat package, both members of the winning team will advance to the 2020 FLW Series Championship, Nov. 5-7 on Lake Cumberland in Burnside, Kentucky, where they will compete for a top prize of $200,000.

The full field of 156 teams compete on Wednesday and Thursday, with only the top-10 – based on two-day cumulative weight – advancing to Championship Friday. The National Champions will be crowned Friday based on the cumulative three-day weight total.

The top 10 teams after Day One on the Harris Chain of Lakes are:

The Abu Garcia College Fishing presented by YETI National Championship presented by Lowrance on the Harris Chain of Lakes is hosted by Lake County, Florida. 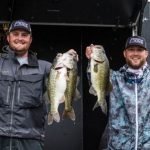