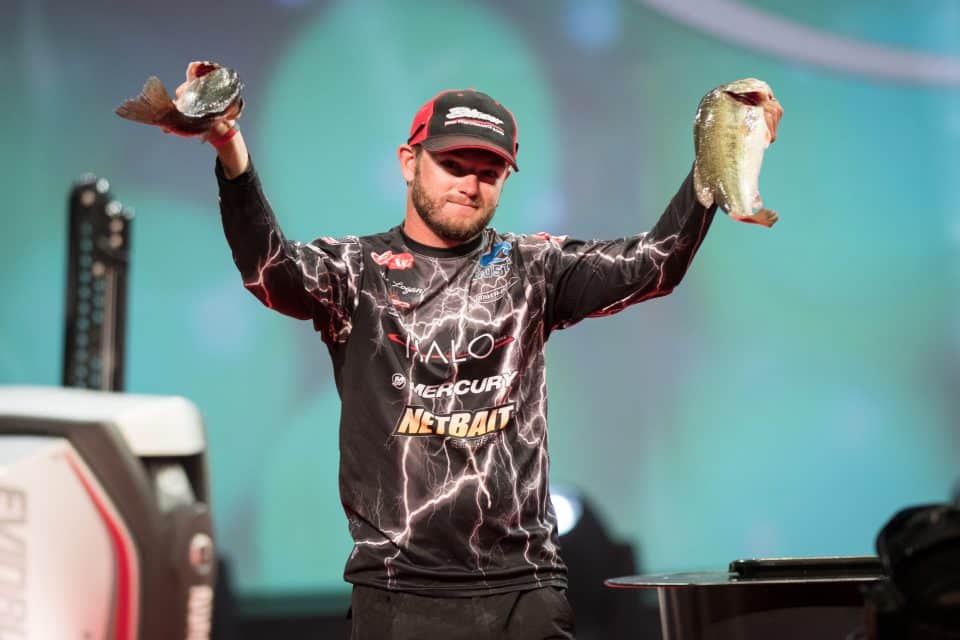 HOT SPRINGS, Ark. (Aug. 11, 2018) – Fifty-six of the best professional bass anglers in the world continued their three-day competition for a top cash award of $300,000 at the 2018 Forrest Wood Cup, the world championship of bass fishing, at Lake Ouachita in Hot Springs, Arkansas on Saturday.

After the last fish had been brought to the scale, FLW Tour rookie Wes Logan of Springville, Alabama, grabbed the lead by weighing in a five-bass limit totaling 12 pounds, 4 ounces – the heaviest limit of the day. Logan’s two-day total of 10 bass weighing 23-13 give him a 1-pound, 2-ounce lead heading into the third and final day, with the 2018 BFL All-American Champion Nick LeBrun of Bossier City, Louisiana, right behind him in second place with eight bass weighing 22-11.

“I hit probably 50 spots today running around, and I burned a lot of gas,” said Logan, whose previous best finish on the FLW Tour was a 12th-place showing on Lake St. Clair this past June. “I’ve got two places that I caught multiple fish off of, but I’m just hitting a bunch of stuff and covering water. I got one good bite yesterday – a 4¼-pounder – that gave me most of my weight yesterday, but today I had one 3-pounder and the rest were just solid fish. I’ve caught around 10 keepers both days.”

Although he declined to divulge his baits of choice, Logan did mention that he was catching fish on four different baits. He joked that he is fishing very similarly to how he did at Lake St. Clair, saying that he is using the exact same rod and reel setup.

“I thought that the brush piles would be more in play due to the weather, but it’s not really playing out like I thought it would,” Logan said. “The fish are setting up more in like drops and hard ledges – the kind of off-the-wall places that get overlooked.

“I’m extremely excited to be leading this thing, but obviously you want to be leading after the third day and not Day Two. I’m going to just go fish tomorrow and pretend like I’m in 10th place and try really hard not to think about it. After takeoff tomorrow I’m going to run north and whatever I run by first that says stop, I’m going to fish it. Hopefully I’ll have a premonition or something. That’s how I’ve been fishing all week – listening to my gut.”

The top 10 pros that advanced to the final day of competition on Lake Ouachita are:

Fans will be treated to the FLW Expo at the Hot Springs Convention Center located at 134 Convention Blvd., in Hot Springs, Sunday from 10 a.m. to 4:30 p.m. prior to the final weigh-in. The Expo includes games, activities and giveaways provided by more than 40 FLW sponsors, the opportunity to shop the latest tackle and outdoor gear from more than 100 exhibitors, Ranger boat simulators, a casting pond and a trout pond for children, as well as the opportunity to meet and interact with top professional anglers, including Hank Parker, Jimmy Houston, and Larry Nixon. FLW’s namesake Forrest L. Wood, the legendary founder of Ranger Boats, will also be greeting fans.

On Sunday the first 250 children 14 and under each day who are accompanied by an adult will receive a voucher to redeem for a free rod-and-reel combo after the evening’s weigh-in from Shakespeare rods. Also on Sunday, one lucky fishing fan will win a brand new Ranger Z521L bass boat with a 250-horsepower Evinrude or Mercury outboard motor. The Ranger Boat giveaway is free to enter but the winner must be present at the conclusion of Sunday’s final weigh-in to win.

Also on Sunday, FLW fans will be treated to the Bass & BBQ Festival in conjunction with the FLW Expo. FLW has partnered with local BBQ vendors to feature award-winning BBQ teams offering delicious fare to visitors at the Forrest Wood Cup Expo. A portion of all proceeds will be donated to local Arkansas charities.

Television coverage of the 2018 Forrest Wood Cup will premiere in high-definition (HD) on NBC Sports Network (NBCSN) Sept. 27 from Noon -1 p.m. EDT. The Emmy-nominated “FLW” television show airs on NBCSNvand the World Fishing Network and is broadcast to more than 564 million households worldwide, making it the most widely distributed weekly outdoors-sports television show in the world. 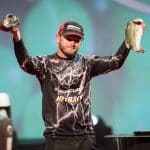