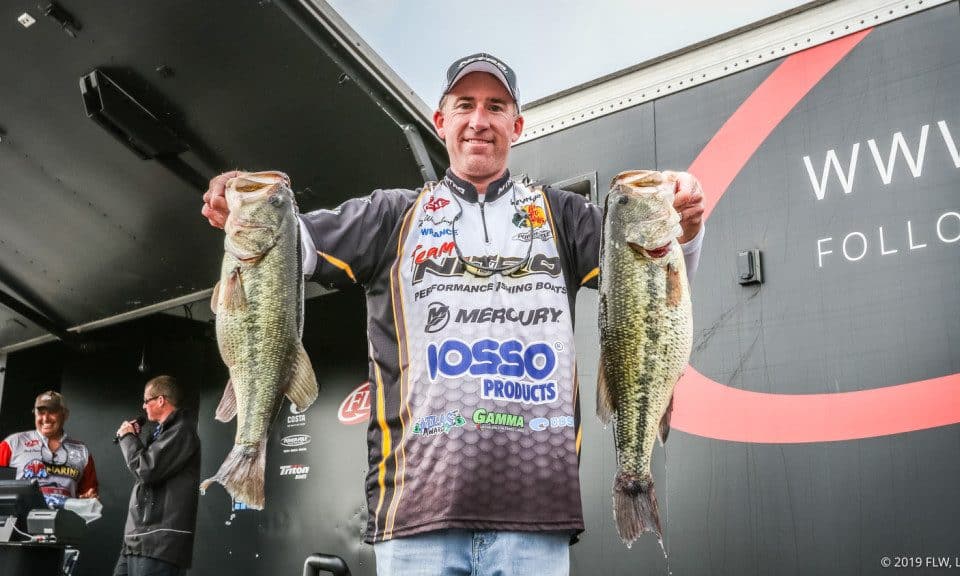 GROVE, Okla. (March 28, 2019) – Pro Kyle Weisenburger of Ottawa, Ohio, caught a five-bass limit weighing 24 pounds, 12 ounces to take the lead on the opening day of the FLW Tour at the Grand Lake presented by Mercury Marine. Pros Todd Castledine of Nacogdoches, Texas (20-2), and Miles Burghoff of Hixson, Tennessee (19-12), are the closest anglers to Weisenburger in second and third place as the four-day tournament, which features 165 of the world’s best bass-fishing professionals casting for a top award of up to $125,000, heads into Day Two.

The weather in northeastern Oklahoma, although overcast, was nice Thursday, although many tournament anglers experienced a Grand Lake that was much more finicky than normal – likely due to fluctuating water levels. The bass are scattered and it’s left many competitors scratching their heads as they try to figure out the puzzle. Weisenburger found his the majority of his big limit in a single pocket, although he was also able to run around his creek arm and replicate his pattern on a couple other spots.

“I had a couple of good little stretches and caught 12 or 13 fish today, which is quadruple anything that I had done in practice,” said Weisenburger, who is fishing in his third season as a pro on the FLW Tour. “I think it was more area-oriented – when I got the stuff I was looking for, I got a couple of bites.

“I caught fish on two different baits,” Weisenburger continued. “I had three rods on my deck, but threw primarily just two baits and when I got in the right area they would really eat one of them. The conditions let me know which one I was going to throw. I checked the forecast and I believe it will be similar tomorrow, which is good because it really set up right for me today.

Weisenburger declined to divulge the specifics on his lures and pattern at this point of the tournament, but did hint that the water he was fishing was a bit dirtier than most.

“I caught one or two more keepers there that didn’t help me, so I decided I was going to ease off of them,” Weisenburger said. “I ended up leaving my primary area and I figured out a little bit of a pattern.

“It was a good day, but it’s only Day One,” Weisenburger went on to say. “I’m going to start in my primary area tomorrow and see where it takes me. Hopefully they’re still there and I will get to fish into the weekend.”

The top 10 pros after day one on Grand Lake are:

Burghoff earned Thursday’s $500 Big Bass award in the pro division after bringing an 8-pound largemouth to the scale – the largest fish of the day.

The total purse for the FLW Tour at Grand Lake presented by Mercury is more than $860,000. The tournament is hosted by the City of Grove and the Cherokee Casino Grove.

In conjunction with the weigh-ins, FLW will host a free Family Fishing Expo at Wolf Creek Park from 2 to 6 p.m. each day. The Expo is a chance for fishing fans to meet their favorite anglers, enjoy interactive games, activities and giveaways provided by FLW sponsors, and learn more about the sport of fishing and other outdoor activities.

Also for youth, the FLW Foundation’s Unified Fishing Derby will be held at the park on Saturday, March 30 from Noon-2 p.m. The event is hosted by FLW Foundation pro Cody Kelley along with other FLW Tour anglers, and is free and open to anyone under the age of 18 and Special Olympics athletes. Rods and reels are available for use, but youth are encouraged to bring their own if they own one. The 1st and 2nd place anglers that catch the biggest fish will be recognized Saturday on the FLW Tour stage, just prior to the pros weighing in.

Television coverage of the FLW Tour at Grand Lake presented by Mercury will premiere in 2019. The Emmy-nominated “FLW” television show airs each Saturday night at 7 p.m. EST and is broadcast to more than 63 million cable, satellite and telecommunications households in the U.S., Canada and the Caribbean on the World Fishing Network (WFN), the leading entertainment destination and digital resource for anglers throughout North America. FLW television is also distributed internationally to FLW partner countries, including Canada, China, Italy, Korea, Mexico, Portugal, Spain and South Africa.

The popular FLW Live on-the-water program will air on Days Three and Four of the event, featuring live action from the boats of the tournament’s top pros each day. New for 2019, host Travis Moran will be joined by Oklahoma Costa FLW Series pro Matt Pangrac to break down the extended action each day from 8 a.m. to 2 p.m. On-the-water broadcasts will be live streamed on FLWFishing.com, the FLW YouTube channel and the FLW Facebook page. 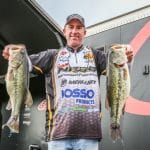