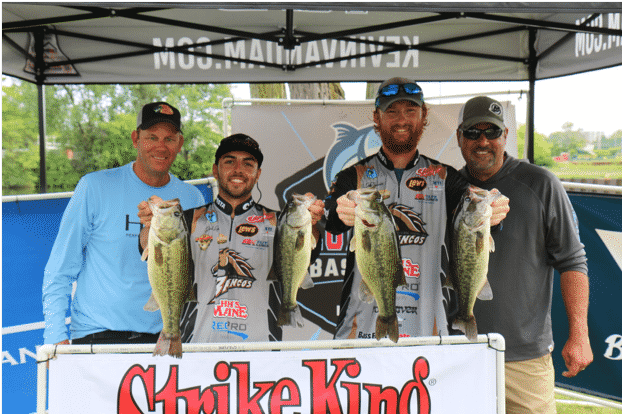 The inaugural event of the College Bass Tour sponsored by DNR Sports and Kevin VanDam kicked off on Muskegon Lake in Muskegon County, Michigan this past Saturday. Muskegon Lake, which is approximately 4 000 acres in size, dumps into Lake Michigan. Both smallmouth and largemouth inhabit the lake and each took their turns visiting the scales today. Kevin VanDam and Mark Zona helped kick off the tour in style with a full tailgate spread, cash winnings and giveaways from many national sponsors.

The event saw 34 teams travel from Indiana, Illinois, Michigan, and Ohio to participate in the event.

The first half-hour after blast-off suggested a beautiful day ahead but such was not to be. A front from the North moved in and launched a torrential downpour for the next 4 ½ hours. The sun finally reappeared in the afternoon.

Once the scales settled, the team of Joshua Lopez and John Neubauer bested the field with a 16.71-pound limit anchored by a 4.27-pound largemouth.

While pre-fishing the event, Neubauer was surprised to find the water stained which is not typical for the lake that time of year he said.

The front actually played right into their hands as they needed the wind to blow, cloud cover, or both for their pattern to work. During pre-fish, they’d found scads of bluegill set up on beds and immediately knew it was “game-on”.

“Today was one of those days that reminded me why we do this,” Neubauer said.

Targeting isolated weed patches with milfoil mixed in, they knew a swim jig would be the ticket. Finding reeds with mixed in with old wood proved valuable as well.

There best water was at the mouth of the Muskegon River, where the combination of wind, reeds, grass patches, and grass mats, proved invaluable as it reloaded with quality fish throughout the day.

“I didn’t realize the current affected the lake so much,” Lopez said.

On Neubauer’s first cast, several bluegill followed his 3/8-ounce homemade green pumpkin colored swim jig rigged with a Bizz Baits BB Magic Craw-colored Killer Craw back to the boat only to clear the way for a charging 4-pound largemouth to engulf the jig. He fished the jig on a 7-foot medium heavy action Fox River rod paired with a Revo SX reel spooled with 15-pound fluorocarbon.

On a day where there enjoyed steady action throughout, Lopez “called an audible” and made a cast with a Booyah Popping Pad Crasher only to have a 4-pound largemouth blow up on it and completely miss. That keyed the team into fishing those isolated patches with milfoil much slower. Using a 7-6 Fox River Rod paired with a Lews Tournament MB reel spooled with 50-pound Sunline FX2 braided, he made ultra-long casts to get his fish to commit to the frog.

While Neubauer fished his, Lopez opted for a 9K Elite Lures swim jig outfitted with a Case Plastics Cash Craw. Fished on a steady retrieve, the swim jig accounted for the majority of their limit with the odd frog fish mixed in.  Whenever they’d impart any time of action to the jig during the retrieve, the bass showed no interest. 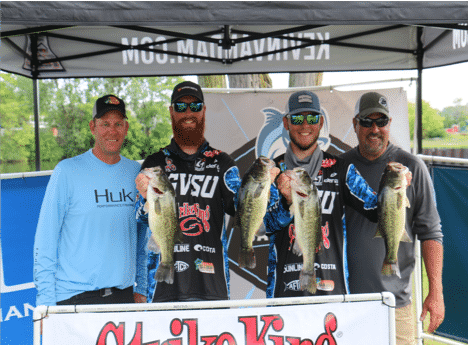 The team of Murphy and Hitt came into the event with plenty of confidence after winning 2018 Carhartt Bassmaster College Series Eastern Tour this past May.

Like the winners, they also keyed in on the bluegill spawn and targeted grass flats.

In the morning during the heart of the storm, the bites were aggressive, their baits often got snatched before they hit the bottom. If it didn’t, they’d hop it once, before making another cast nearby.

“Keeping our baits in the water was key,” Lucas started. “You could flip a foot to the left or right of where you just cast and get bit.” After the storm rolled through, they noticed that while their fish were still there, they’d turned lazy.

“You really had to knock them on the head to get them to bite”, Murphy said.

The team flipped grass quickly and efficiently using green pumpkin Texas-Rigged Strike King Rage Craws rigged on a 1-ounce tungsten weight while they fished Strike King Cut R Worms around sparse weeds rigged on a ½-ounce weight. Towards the end of the day, they were trying to almost create a reaction bite while pitching and flipping. 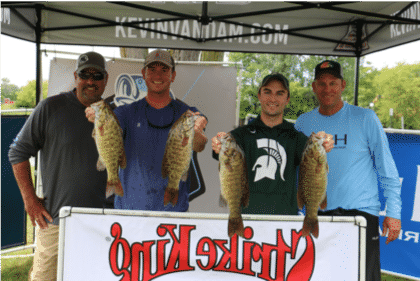 For Sprague and Welch, focussing on current was the ticket to cashing a cheque.

Despite having to share some of their spots with other boats, Sprague mentioned they had a rather unique way of looking at the situation.

“It actually gave us confidence knowing that our fish were still in the area even if others were catching them nearby,” he said.

They worked through different periods of time during the day when the bass would feed in flurries and while the storm helped some teams, it forced them to keep an open-mind.

“With the overcast conditions all day, there were much more spread out and roaming rather than locked tight to any certain type of structure,” Welch said.

“One thing I didn’t realize was how much the bass related to cover once the sun came out in the afternoon,” Sprague said.

The abundance of clouds scattered their fish which left them to cover water with an out-of-production Smithwick jerkbait that mimicked a green perch and a tube jig. 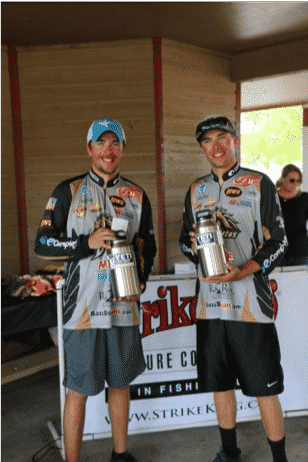 After losing the first 3 fish of the day, the Jump brothers got things turned around quick.

During their pre-fish, they’d noticed that the bluegills were on beds on the northwest side of the lake with better than average largemouth roaming nearby.

They figure they weeded through 20- to 25-keepers during the course of the day.

Using their 2d imaging, they’d discovered that the coon tail flats they’d targeted had thicker weeds on the steeper drops. In 8 ½ to 9 ½ feet of water. They decided to target the thickest weed growth that they could find.

Initially they thought that with the front moving through that the largemouth would be roaming and that they’d pick them off with black/blue Chatterbaits outfitted with a Case Plastics Cash Craw trailer. Quickly they realized that their fish a change of heart.

Instead, they slowed down and dissected the area with Texas-rigged Case Plastics Paddle Jack craw worm rigged on ¾ and 1-ounce tungsten sinkers. They fished it on a 7-6 RaZr Rods flipping stick paired with a Lews Tournament MB reel with 8:3:1 gearing spooled with 50- to 65-pound braided line. IF they didn’t get bit on the drop or when the bait just hit bottom, they’d reel in and continue to cover water.

“This area was perfect for post-spawn bass to ambush prey and feed,” Kyle Jump said. “They’re starting to munch now.” 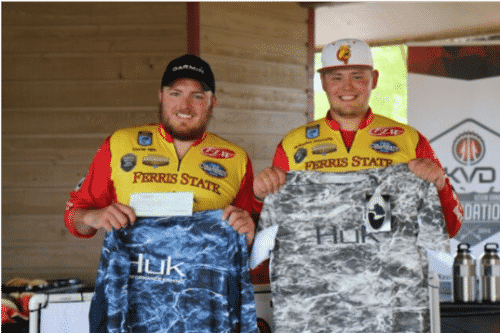 Sometimes it’s good to zig when others zag and that is exactly what the team of Oja and Nastally did to crack the Top 5.

While many teams focussed on the bluegill spawn or targeted vegetation, they elected to run to the channel that pushes water from Lake Michigan into Muskegon Lake.

Upon arriving at their spot, they were amazed to see that the wind had shifted and actually stalled the current allowing their baits to fall vertically instead of gliding. “The wind made its on current,” Oja said.

Fishing a Ned Rig with a Z-Man TRD Finesse worm, they alternated between several head weights to get the proper rate of fall depending on what the current was doing.

Once the bait hit the bottom, Oja would hop it but got most of his bites once he imparted a quick turn after popping the bait.

The fish were stingy- the team only caught 6 fish all day.

Line watching to detect their bites was key so they fished 8-pound fluorescent green and orange Berkley FireLine braided line with a 12-pound fluorocarbon leader. 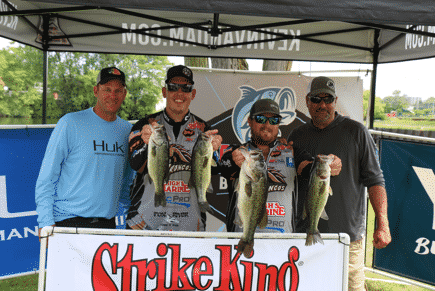 For more information on the College Bass Tour, visit CollegeBassTour.com or KevinVanDam.com. 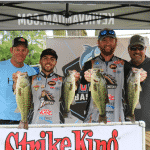