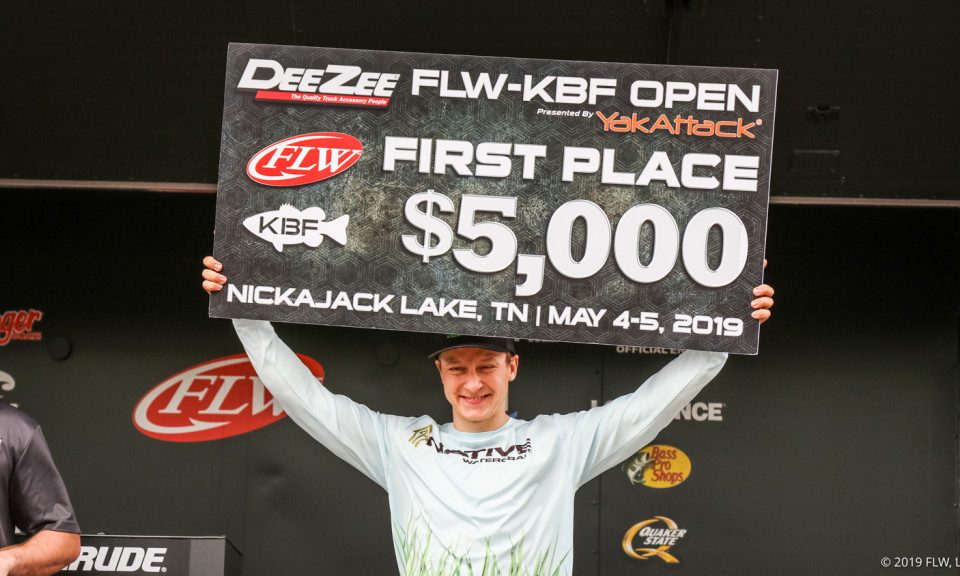 DAYTON, Tenn. (May 5, 2019) – By just a slim 2-inch margin, 23-year-old Michigan angler Bogdan Korostetskyi, won the inaugural Dee Zee FLW/KBF Kayak Open at Nickajack Lake presented by YakAttack Sunday after catching a two-day total of 174.25 inches of bass. For his win, Korostetskyi earned $5,000 and added a $2,500 Dee Zee gift card for being the highest-finishing angler in the Dee Zee contingency program.

During practice, Korostetskyi, a college student in Michigan who was born in Ukraine, said he struggled to find a consistent bite anywhere but on the bank, but he didn’t want to focus his tournament where he was afraid most of the 103 anglers in the field would be fishing. Eventually, he tracked down a couple of grassy offshore humps.

“That’s pretty much what we fish in Michigan, so I felt right at home,” he said.

On Saturday, Korostetskyi found his fish schooling on his two best spots and caught fish quickly, catching a limit by 7:15. Sunday, he fished the same places, but reversed the order, starting on a hump that took him 48 minutes to reach then finishing on another hump about halfway between the first hump and his launch point.

The bass weren’t schooling Sunday, and Korostetskyi encountered muddier water and a wind direction that had flipped 180 degrees from the day before. He needed time to figure out the best way to hold in the wind and line up for the right casting angle to get them to bite.

“It took me one hour to catch my first keeper,” he said.

His strategy was to fish his primary hump, slide off it to some nearby grassy structure to let the good spot rest, then return to it and catch more. Then he finished on his second spot on the way back.

The best humps were about 8 feet deep, with grass that was about 4 feet tall. Korostetskyi said he caught his fish with a 1/2-ounce Evergreen/Z-Man ChatterBait Jackhammer with a Z-Man DieZel MinnowZ trailer.

“It feels surreal,” Krostetskyi went on to say. “I still don’t know what’s going on. I’ve been going on three hours of sleep.

“I was not expecting that. My goal was just to do my best. It was very stressful. I think I had high expectations, but it just worked out.”

Complete results can be found at KayakBassFishing.com.

The top 100 finishers are now qualfied to compete in the second event, the Dee Zee FLW/KBF Cup in Hot Springs, Arkansas presented by YakAttack. Of these 100 qualifiers, the top 20 will receive free entry. All other qualifiers pay a $500 entry fee. The Dee Zee FLW/KBF Cup will be held Aug. 8-10, 2019, on a lake to be announced soon in conjunction with the FLW Cup on Lake Hamilton.

KBF was formed in 2009 to offer kayak anglers the opportunity to compete for hundreds of thousands of dollars in cash and prizes at premier fisheries around the country. Currently in its seventh season for live events, KBF offers more than 25 professional-level bass-fishing tournaments to kayak anglers. For complete KBF details, schedules and updated information, visit KayakBassFishing.com.

Very nice write up! Appreciate it very much! 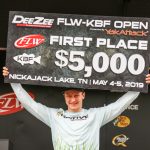