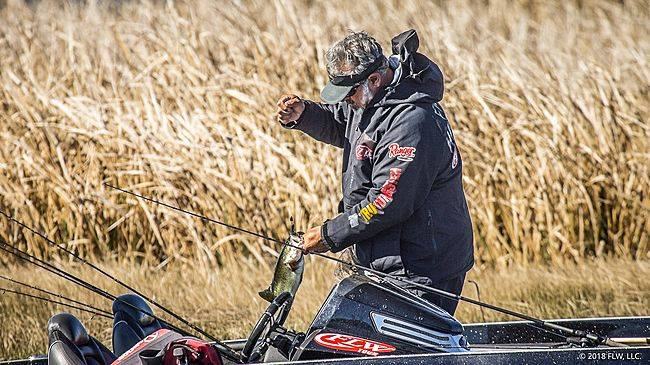 Peter Thliveros is among the most successful tournament pros to ever come from North Florida. A native of the St Johns River, ‘Peter T’ has left the tournament business to his son, Nick and now spends time guiding on the big river that will host this weeks Bassmaster Elite Series tournament.

While he would be a great guide for anybody wanting to catch big Florida bass or our nearby saltwater species, today Thliveros is helping to guide my expectations for this week’s event. “I could be wrong, but my gut says 18 pounds a day will win it.

“Tough bite. The water temp is hovering around 60 degrees because the nights have still been cool. And that front that’s coming will not only cool the water, but the wind from it will eliminate a lot of the places these guys may want to fish.”

Specifically, Thliveros is thinking of a nice stand of eel grass on the east side of Lake George near the area where Cliff Pirch made the final cut last year. “A southwest wind is going to trash that area. You won’t even be able to fish it. It ain’t too calm out there today,” he says on the eve of competition. With an average depth of only 10 feet across its 72-square miles, Lake George blows up big waves in a hurry.

So, just find grass on the west side of the lake, right? “There is no vegetation,” except for the aforementioned patch. On the whole lake.

The veteran pro thinks we may see some nice stringers from the Astor area tucked away south of the big lake and hidden from harsh winds. Locals have reported seeing beautiful pads fields down there this winter amid the no-wake zones and manatee speed zones that slow travel through the area. Adding to the adventuresome run, anglers will have to negotiate any rough water that may arise on the 13-mile length of Lake George, whitecapped waves eating away at the tournament clock as they pound boat, rider and gear, the occasional blast of cold water spraying across the bow.

Famed springs along the west shore of Lake George will not be lonely places. “They’ll have all the boats they can hold. After the bedding fish get picked off it might slow down in there, but they’ll give up whatever they have to offer,” notes Thliveros. The spring-fed runs hold a constant water temperature near 70 degrees regardless of weather and water temperatures on the main lake.

Will the weather stack fish along productive main river shell bars that give up so many bass throughout the seasons? “This can be a tough time of year for that,” notes Thliveros. “You can’t count on those fish being there for four days. I remember a tournament where I caught them for two days offshore and then, after that bite died, I went to a canal and I was like ‘where did all these fish come from?’. They can leave those shell bars in hours. Every fish out there, just gone.

“But with this weather, they may not go right to the bank either. They may just be in limbo – not really deep anymore, but not yet shallow either. Hard to find. They’re going to be close to where they want to go, but maybe not on the beds yet.”

Look for spinnerbaits, bladed jigs, crankbaits – lipless or otherwise – to play a role this week. Worms always work well when things get slow in Florida.

As the expected cold front makes it way through the region, winds will blow form all directions on the compass rose. The highest, as brisk as 20 mph, will come late Thursday and throughout competition hours Friday, mainly from the southwest and west. A friendly blow from the east should greet anglers who make the cut and fish this weekend. The 40 pros who launch Saturday morning will likely do so in near-freezing temperatures. The final 10 contestants should enjoy a mild warm up of about 10 degrees on Sunday, setting up what may be the 2nd-most productive day of the tournament, tomorrow’s sight-fish-fueled opening round likely being the heaviest.

Thliveros made a couple of interesting picks with respect to guys we should watch this week.

“Cliff Prince might be able to put it together for 3 or 4 days because he knows those shell bars so well.” Prince is a local favorite which makes him a measuring stick of sorts. His experience on the river, coupled with how he does in this event, will give onlookers a good idea as to how well the St Johns itself is performing lately.

Then there’s the wildcard.

“Seth Feider. He was dropshoting in 20 feet last year. Nobody fishes that way down here. It’s not typical shell bar fishing. He targeted suspended fish, and some on bottom, in water deeper than we, locals, ever fish for them here – in 18-to-20 feet of water. Those are some of those ‘limbo’ fish that aren’t where they’re supposed to be.”

Last year the Elite Series hit the river just right and Rick Clunn took another St Johns Elite Series title with 98 pounds, 14 ounces – 34-14 of it coming on the final day. This year doesn’t promise quite such a show, but hoards of big bass live here and the fish could make massive moves, as could our anglers, any given hour of the event. 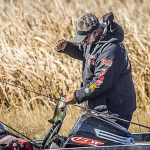