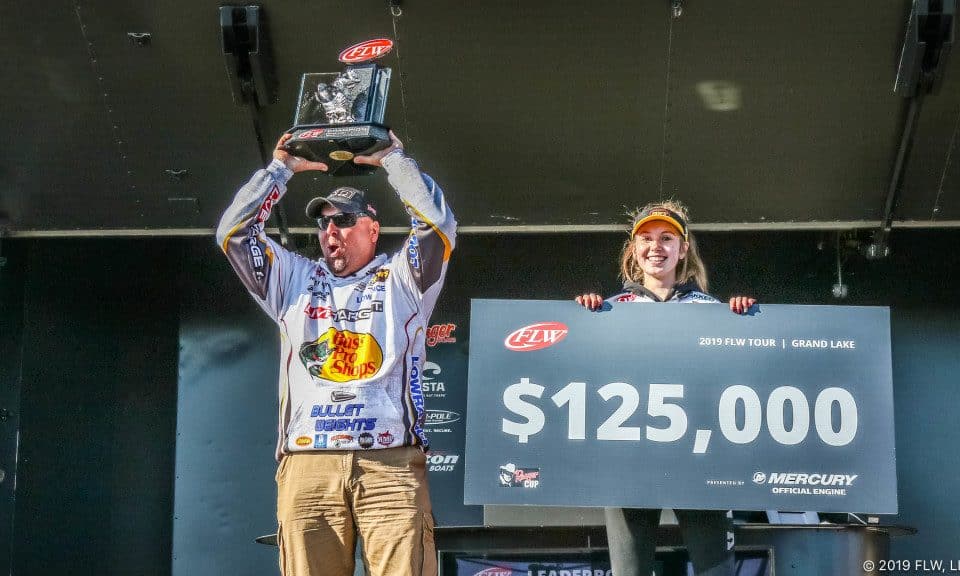 GROVE, Okla. (March 31, 2019) – The FLW Tour at Grand Lake presented by Mercury Marine promised a dramatic finish Sunday as all of the final top-10 anglers competing were within striking distance of first place and the title of Grand Lake Champion. When the scales settled, it was Bass Pro Shops pro Jeremy Lawyer of Sarcoxie, Missouri, who had caught enough weight to earn the first FLW Tour victory of his career.

Lawyer’s final-day catch of five bass weighing 13 pounds, 14 ounces gave him a four-day total of 62-12 and the win via tiebreaker – the Day Three standings – over international angler Michael Matthee of Centurion, Gauteng, South Africa, who also weighed in a four-day total of 62-12, but started the day fourth place. Lawyer started the day in place and earned the win and the first place prize of $125,000.

“I can’t even express what this means,” said Lawyer, the 2016 Bass Fishing League (BFL) All-American Champion who is fishing his third season on the FLW Tour. “I dreamt for years of making the All-American, then I finally made it there and won it. That was a huge milestone for my family – my bank account, my fishing career, everything. Now, to get a win at the Tour level, it’s unbelievable. And to do it here with my friends following me on a lake that I’ve got a lot of history with and love for, gosh, it couldn’t be any better.”

Lawyer said that he caught all 20 of the fish that he weighed in this week on spinnerbaits, his key one being a ¾-ounce Freedom Lures Swing head spinnerbait thrown on a 7-foot, 6-inch Lew’s Magnum Heavy Cover rod and Lew’s Pro Magnesium reel spooled with 20-pound Sunline fluorocarbon. He credited his knowledge of the lake as being the key to his victory.

Like most of the FLW Tour field, Lawyer said the fishing was a grind. He caught seven keepers on each of the first two days of competition, six keepers on Saturday and just five keepers on Sunday. Despite the tough conditions, Lawyer declared that Grand Lake was still in great shape.

“If we were here just two weeks later, it’d be stupid what we catch,” Lawyer said. “The lake is in great shape, but the weather is just what held us all back this week. That probably worked in my favor.

“Getting the win from the tiebreaker just goes to show how tight the competition is on the FLW Tour,” Lawyer went on to say. “Everyone out here can catch them, and it really shows the power of catching five every day. I caught a tiny little line-burner today that I was embarrassed to bring to weigh-in, but boy, am I glad that I brought him along.”

Overall there were 31 bass weighing 102 pounds, 8 ounces caught by pros Sunday. Five of the final 10 pros weighed in five-bass limits.

Television coverage of the FLW Tour at Grand Lake presented by Mercury will premiere in 2019. The Emmy-nominated “FLW” television show airs each Saturday night at 7 p.m. EST and is broadcast to more than 63 million cable, satellite and telecommunications households in the U.S., Canada and the Caribbean on the World Fishing Network (WFN), the leading entertainment destination and digital resource for anglers throughout North America. FLW television is also distributed internationally to FLW partner countries, including Canada, China, Italy, Korea, Mexico, Portugal, Spain and South Africa.

The total purse for the FLW Tour at Grand Lake presented by Mercury was more than $860,000. The tournament was hosted by the City of Grove and the Cherokee Casino Grove. The next event for FLW Tour anglers will be the FLW Tour at Cherokee Lake presented by Lowrance, in Jefferson City Tennessee, April 11-14. The tournament will be hosted by the Economic Development Alliance of Jefferson County.

In FLW Tour competition, the full field of 165 pro anglers competed in the two-day opening round Thursday and Friday. The top 30 pros based on their two-day accumulated weight advanced to fish on Saturday. Only the top 10 pros continued competition Sunday, with the winner determined by the heaviest accumulated weight from the four days of competition.

Throughout the season, anglers are also vying for valuable points in hopes of qualifying for the 2019 FLW Cup, the world championship of professional bass fishing. The 2019 FLW Cup will be on Lake Hamilton in Hot Springs, Arkansas, Aug. 9-11and is hosted by the Arkansas Department of Parks and Tourism and Visit Hot Springs. 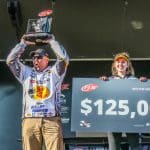