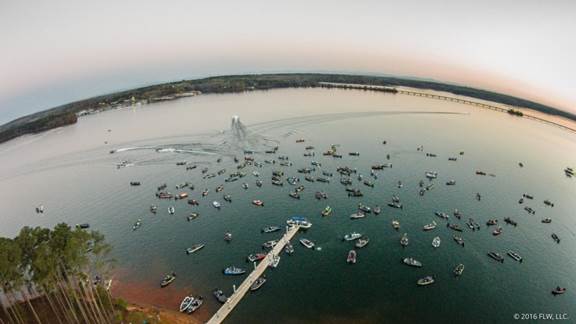 SENECA, S.C. (Feb. 24, 2020) – The 2020 Toyota Series will continue its season next week at Lake Hartwell, March 3-5, with the Toyota Series at Lake Hartwell tournament. Hosted by Visit Oconee, the three-day tournament will feature the best regional bass-fishing pros and co-anglers casting for a top prize of up to $65,000, plus a $35,000 bonus if the winner is a qualified Phoenix Boat owner.

“The fish are still in their wintertime patterns – we haven’t had much warm weather yet, and we’ve even had some snow recently – so I think we’re going to see a good mixture of fish caught out of ditches and stuff like that. Any areas where they can chase the bait up shallow,” said Tackle Warehouse Pro Circuit pro David Williams of Maiden, North Carolina, who has eight top-10 finishes on Lake Hartwell in FLW competition.

“Finding the baitfish will be the key in this tournament,” continued Williams. “We’re going to see anglers throwing a lot of crankbaits, swimbaits, jigs and shaky-head rigs. Within the next few weeks we’ll start to see fish move up shallow, but the normal wintertime patterns will be in play for this one.

“I think it’s going to take 14½ to 15 pounds a day to be there at the end,” Williams went on to say. “I predict that the three-day winner is going to have right around 45 pounds”

Anglers will take off from the Clemson Beach and Recreation Area, located at 275 YMCA Circle in Seneca at 7 a.m. EDT each day of competition. The weigh-ins will be held each day at the Recreation Area beginning at 3 p.m. All takeoffs and weigh-ins are free and open to the public.

“Visit Oconee SC is excited to welcome the 2020 Toyota Series to Lake Hartwell,” said Charlotte Waters, Sales/Event Manager with Visit Oconee. “The economic impact of this event is significant to our community. We wish all the anglers a memorable and safe time throughout the event on Lake Hartwell and we hope to show them why Oconee County is well known for our natural resources and outdoor adventure.”

Anglers and fans attending the event will have the free opportunity to win a new a Polaris Sportsman® 570 EPS, valued at approximately $7,799. To enter, fans can complete an official entry form on-site and deposit into an official ballot box at participating FLW tournaments from March 2 through November 14, 2020.

In Toyota Series regular-season competition, payouts are based on the number of participants competing in the event, scaling up for every 20 boats over 160 and scaling down for every boat below 160. With a full field, pros will fish for a top prize of up to $65,000, plus an extra $35,000 if FLW PHOENIX BONUS qualified. Co-anglers will cast for the top prize of a new Phoenix 518 Pro bass boat with a 115-horsepower outboard (valued at $33,500). 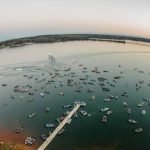