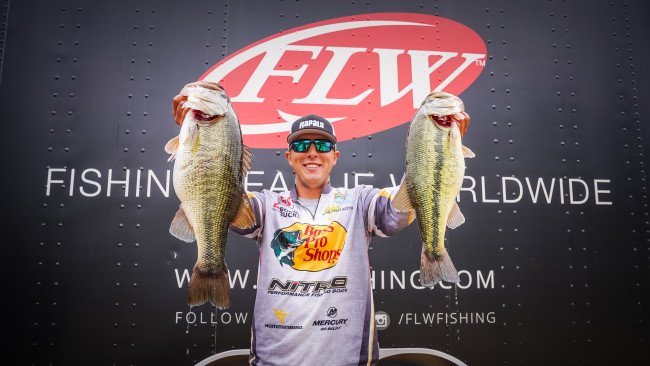 Last week, the Bethel University angler won the Bassmaster College Series event on Toledo with his partner Dakota Peirce. And after heading to back to Tennessee to drop off Pierce, Huff hightailed it back to Toledo Bend and picked up right where he left off.

The only pro to weigh back-to-back 20-pound bags, Huff put 23 pounds, 6 ounces on the scale on day two and has a 7-8 lead over local guide Justin Cooper who sits in second with 36-4 total. With 43-12 overall, Huff appears to be cruising toward the win in the first Toyota Series Southwestern Division event of the year. Going into the final day, Huff certainly seems to have a handle on things, but you can never count a comeback out on Toledo Bend – a 30-pound bag is always just around the corner for someone.

Huff’s main program involves staring at his electronics offshore until he marks suspended bass chasing shad. He won’t make a cast with his jigging spoon until he marks fish, so he’s not winning any award for most casts made this week, but he has been making the most of his opportunities. It also doesn’t hurt that he’s fishing comfortable – similar to how he would back in the Ozarks.

“It’s something I’ve grown up around,” Huff says of chasing suspended fish. “It’s what everyone does at home in the wintertime when the bait goes deep. This isn’t the deepest I’ve ever caught them, they’re suspended over deep water, but not really that deep. A lot of them are from 20 to 40 feet. But at Table Rock you could go there now and catch one from 70 to 90 feet.

“I’m not casting unless I’m casting at fish. Today I probably caught 12 keepers, maybe 15,” says Huff. “Not a crazy amount, but enough. But I’m around a lot of fish and I’m seeing a lot of fish, so I’m hopeful for another day of it.”

Throughout the college event and this tournament, Huff has relied on consistent good bites. Not the 8- to 10-pound fish that swim in Toledo, but instead a good supply of 4- to 6-pounders. Yesterday the fish didn’t setup how he needs them until the afternoon, but today he got the ball rolling early.

“As soon as I pulled up this morning the bait was already where it’s supposed to be, but the bass were still spread out,” he adds. “But it didn’t take them long to group up like they should and by 9 or 10 o’clock they grouped up and bit a little better today for me. They were where they are supposed to be and were still there when I left.

“The first big bite I got today was around 11 o’clock and the next big one was close to 1 o’clock. Then I culled with a 4-pounder on my last cast and came in a little early hoping to save the rest for tomorrow.”

While the locals behind Huff are utilizing a wealth of knowledge on this lake coupled with years of experience, Huff has been hunkering down in a few areas where he knows big bass swim because of the amount of bait in the areas.

“I know I’m around giants; I’ve caught three big ones the last two days in the same area and I see what’s with them,” says Huff. “I know there’s more big ones with them. It’s a big area, so I’m not sitting in the spot, I’m just moving around a lot in the same area.”

With one day to go, Huff is excited to get back out and see if Toledo Bend can be kind to him for one more day and put an incredible ribbon on a fantastic week of fishing.

So, is this his favorite lake now?

“Not yet, but I’ll let you know tomorrow afternoon around 3 o’clock.”

For his first FLW tournament, Aubrey Hyde of Winnfield, La., is holding his own. Hyde caught a limit worth 12 pounds, 9 ounces on day one to sit in sixth-place. Today, he found a kicker bite and that bumped his day-two bag to 15-2 with 27-11 overall. Heading into the final round, he holds a 1-pound lead over Robert Kessler.

Consistency has been a key for Hyde this week, but his big bite today really helped push him into the lead.

“Thanks to my boater and thank God for that big fish,” Hyde says. “I’ve been praying.”

Paired with Jack Covas today, Hyde was able to capitalize on an offshore bite.

“Jack is a real nice guy and he showed me how to catch these fish today, otherwise I wouldn’t have had a clue,” says Hyde. “Most all my fish have come offshore from 18- to 40-foot deep. Today, they wanted something small, like a little swimbait, drop-shot, Carolina rig or an underspin. I’ve never fished this deep, but I’ve learned a lot this week and I like fishing deep now.”

With one day to go, Hyde is looking to go one for one in his FLW tournament career. Though, he’s not too worried about the win just yet. He’s just happy to be here.

“A friend of mine, Benjamin Gullett, talked me in to coming out here and trying this out and I’m glad I did.” 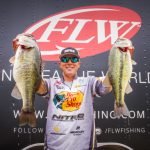