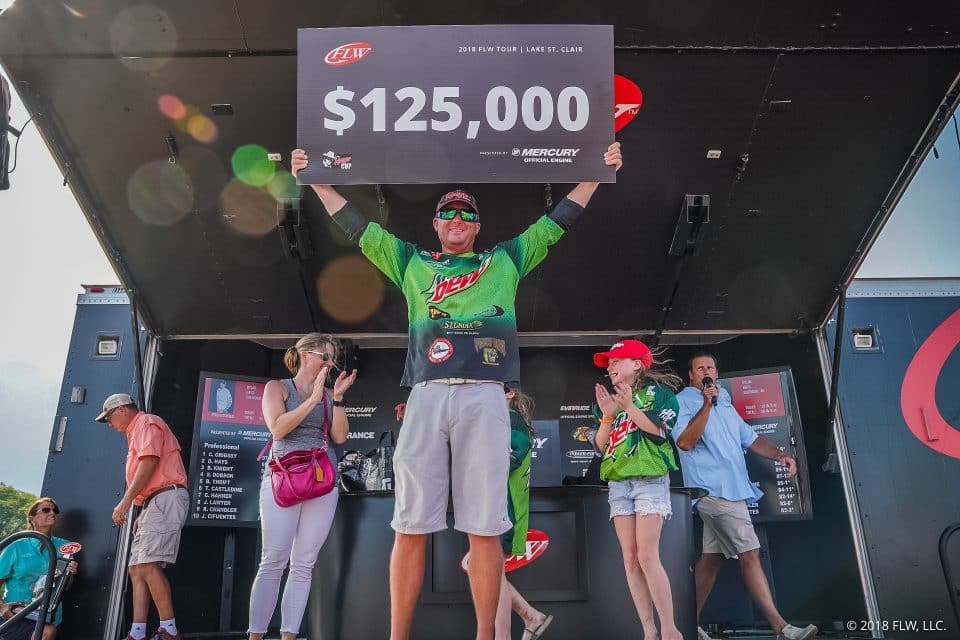 “I love this lake and today was one of those days that was just incredible,” said Grigsby, a five-time Forrest Wood Cup qualifier. “I’m at a loss for words on how good the lake is fishing. Michigan is my home state, and I’ve been fishing here for 20 years. I’ve never seen it so good. The fishing has been phenomenal – it’s been a really special week.”

Grigsby caught his bass this week fishing an area he estimated as 1/8 of a mile stretch on the southern Canadian side of St. Clair that he had all to himself.

“I found this group of fish during practice and I knew after the first day that this was a really special spot,” Grigsby said. “It had all of the right ingredients – a ton of bait, grass patches, sand, and it was deep. It was loaded with fish. I was so disappointed yesterday when I only weighed in 21 pounds, and that’s just ridiculous.”

Grigsby credited three baits as being key for him this week – a Duo Realis Spinbait 80 spybait, a 4-inch green pumpkin and gold-colored Venom Lures Tube on a ¾ ounce Venom jig head, and a ¼-ounce black marabou hair jig.

Grigsby’s win highlights a season which saw his return to the FLW Tour and qualification for his first Forrest Wood Cup appearance since 2010 after a two-year stint on the Bassmaster Elite Series.

“To get this win is just awesome,” said Grigsby. “I’ve had to overcome a lot of my own demons. I’ve had such a bad last two years I didn’t even feel comfortable fishing anymore. I had no confidence. Coming back to the Tour – especially these last four events – I finally feel relaxed, comfortable and confident in my abilities as an angler. And now winning here just blows everything out of the water.”

Overall there were 50 bass weighing 211 pounds, 9 ounces caught by pros Sunday. All of the final 10 pros weighed in five-bass limits.

Mark Myers of Cedar Falls, Iowa, won the Co-angler Division and $20,000 Friday with a two-day total of 10 bass weighing 42 pounds, 4 ounces, followed by Billy Messer of Spartanburg, South Carolina, who finished in second place with 10 bass totaling 41-4, worth $7,550.

Television coverage of the FLW Tour at Lake St. Clair presented by Mercury will premiere in high-definition (HD) on NBC Sports Network (NBCSN) Aug. 8 from Noon-1 p.m. EST. The Emmy-nominated “FLW” television show airs on NBCSN, the Pursuit Channel and the World Fishing Network and is broadcast to more than 564 million households worldwide.

The total purse for the FLW Tour at Lake St. Clair presented by Mercury was more than $930,000. The tournament was hosted by the Detroit Sports Commission, Macomb County, the Huron-Clinton Metroparks Authority and the Sterling Heights Regional Chamber of Commerce. The next event for FLW Tour anglers will be the 2018 Forrest Wood Cup on Lake Ouachita in Hot Springs, Arkansas, Aug. 10-12 hosted by the Arkansas Department of Parks and Tourism and Visit Hot Springs.

In FLW Tour competition, pros and co-anglers are randomly paired each day, with pros supplying the boat, controlling boat movement and competing against other pros. Co-anglers fish from the back deck against other co-anglers. The full field of 360 anglers competed in the two-day opening round. Co-angler competition concluded following Friday’s weigh-in, while the top 30 pros based on their two-day accumulated weight advanced to Saturday. Only the top 10 pros continued competition Sunday, with the winner determined by the heaviest accumulated weight from the four days of competition. 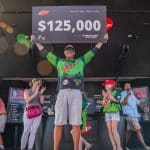