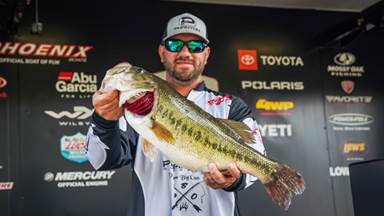 ALEXANDER CITY, Ala. (March 18, 2020) – A field of bass fishing professionals from around the world began their four-day competition for a top award of up to $135,000 at the Tackle Warehouse Pro Circuit at Lake Martin Wednesday in Alexander City,AL.

“I was fishing on the lower end of the lake, trying to sight fish for most of the day,” said Adams, who finished the season ranked No. 12 in the Toyota Series Southeastern division last year. “I caught the big one first thing this morning off a bed. Then I ran around and plucked a few more and tried to find some big ones for tomorrow.”

Adams said he caught his big one – an 8-pound, 13-ounce giant – on a Texas-rigged white Gambler Burner Craw, but he also weighed in a few fish on a 3/8-ounce green-pumpkin-colored jig with a green-pumpkin Zoom Fat Albert Twin Tail Grub. His limit that he brought to the scale consisted of four largemouth and one spotted bass.

“I found a 6-pounder and a 4-pounder still on the bed. They wouldn’t bite for me today, but hopefully they will tomorrow,” the Georgia pro said.

“I’m in the last flight tomorrow, and during practice it seemed like I was getting bit a little more later in the evening so hopefully that is a good thing,” Adams went on to say. “First thing in the morning I’m going to run to those bedders and pick a couple of fish off and then I’ll start fishing.

“I can throw a shaky-head around docks and get bit doing that if I have to. Hopefully I can get what I need.”

The top 10 pros after day one on Lake Martin are:

Adams also won the day’s $500 Berkley Big Bass award in the pro division after bringing a largemouth weighing 8 pounds, 13 ounces to the scale.

Overall there were 750 bass weighing 1,513 pounds, 8 ounces caught by 150 pros Wednesday. The catch included 150 five-bass limits – every pro that was on the water caught a limit.

The Tackle Warehouse Pro Circuit at Lake Martin is hosted by the Alexander City Chamber.

In Tackle Warehouse Pro Circuit competition, the full field of 150 anglers compete in the two-day opening round Wednesday and Thursday. The top 30 pros based on their two-day accumulated weight advance to Friday. Only the top 10 pros continue competition Saturday, with the winner determined by the heaviest accumulated weight from the four days of competition.

Throughout the season, anglers are also vying for valuable points in hopes of qualifying for the 2020 FLW TITLE, the Pro Circuit Championship. The 2020 FLW TITLE will be on the St. Lawrence River in Massena, New York, Aug. 8-13 and is hosted by the Town of Massena.

Anglers will take off at 7 a.m. CST each day from Wind Creek State Park, located at 4325 Alabama Highway 128, in Alexander City. Daily weigh-ins will be held at the State Park beginning at 3 p.m.

The popular FLW Live on-the-water broadcast will air on Friday and Saturday, featuring live action from the boats of the tournament’s top pros each day. Host Travis Moran is joined by Toyota Series pro Todd Hollowell to break down the extended action each day from 8 a.m. to 2 p.m. On-the-water broadcasts will be live streamed on FLWFishing.com, the FLW YouTube channel and the FLW Facebook page. 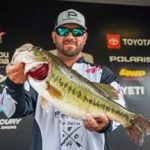