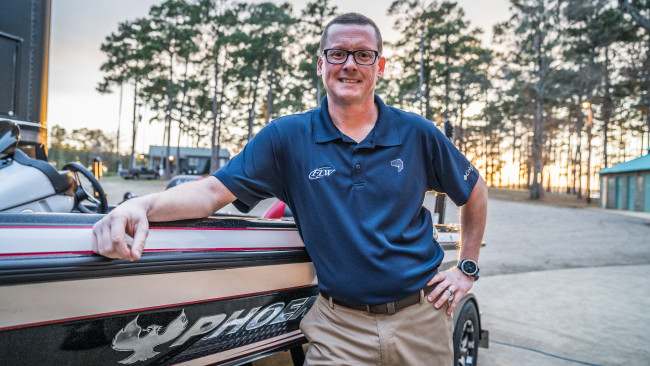 To say that Daniel Fennel has been part of the FLW family all his life is not an understatement. It’s absolutely true.

Daniel, the son of FLW Executive Vice President and General Manager Kathy Fennel, attended his first FLW event before the age of 1. In the intermittent years, he developed a passion for fishing before formally joining the FLW crew in 2005 and eventually taking the helm of the Phoenix Bass Fishing League presented by T-H Marine in 2011. Now 38, Daniel is an avid angler with the opportunity to apply all his years of tournament management experience toward a new and bigger task: directing the Tackle Warehouse Pro Circuit.

At the registration meeting for this week’s Pro Circuit season opener at Sam Rayburn Reservoir, FLW announced that Daniel had been promoted to senior director of tournament operations for the Pro Circuit, FLW Series and Phoenix Bass Fishing League, with responsibilities to include directing the Pro Circuit. Bill Taylor, who served as tournament director for the FLW Tour from 2001 through 2019, has been promoted to senior director of operations, where he’ll lend his expertise acquired through more than two decades as a tournament director toward logistics, angler relations and event planning for all FLW circuits.

“We’re extremely lucky at FLW to have a dedicated staff of people like Daniel and Bill who’ve committed so many years to running the best bass tournaments in the industry,” says Kathy Fennel. “Bill has been an instrumental part of the success of FLW over the years, and nobody knows more about running pro-level tournaments than him. We’re lucky that he’ll continue to support Pro Circuit operations, and that he’ll now be bringing all his knowledge to all of FLW’s tournament circuits. Bill is a fantastic recruiter and a master of the details that make a successful tournament.

“Obviously, I’m also very proud of Daniel for all he’s accomplished as the director of the Phoenix Bass Fishing League, helping it to remain the premier league for weekend anglers and aspiring pros. I know that with his leadership and a great crew in place supporting him that the new Pro Circuit will live up to the 24-year legacy of the former FLW Tour.”

While Daniel Fennel spent much of his youth bopping around tournament weigh-ins and attending FLW events, his full-time career with the organization began in the customer service department in 2005. He quickly advanced through the ranks, becoming an in-house tournament director and then a Phoenix Bass Fishing League presented by T-H Marine tournament director. In 2011, he became the head of Bass Fishing League operations. He also spent more than a decade on the FLW Tour event staff and emceed FLW Tour qualifying round weigh-ins starting in 2015.

In his new role, Fennel will oversee tournament operations for some of FLW’s most popular circuits, while continuing to direct the Bass Fishing League LBL and Music City divisions. But his most visible role within the angling community will be as the head of the organization’s highest-level tournament series as it transitions from the FLW Tour to the Pro Circuit in 2020.

“This is a whole new chapter for FLW,” he says about the launch of the new Pro Circuit. “We have an opportunity to show the world what FLW pros can do thanks to the expanded media coverage the Pro Circuit will enjoy this season. The pros are going to see that immediately, and they’re really going to enjoy the ride. I’m expecting an unbelievable year.”

The job of tournament director is sort of like being a sheriff – equal parts rule enforcement and coordinating staff and logistics. In Fennel’s case, he’s inherited a seasoned crew of “deputies.”

“We were able to retain all of our Pro Circuit crew, and those people are as experienced at setting up and executing quality fishing tournaments as anybody in the world,” he says. “Not only that, but they’ve got a synergy among themselves where every person knows what their course of action is. Everybody knows what the objective is, and that is for us to operate the best fishing tournaments in the world. You can’t ask for a better crew.

“And there’s nobody in the world better than Bill Taylor. Nobody has the fishing knowledge of the entire country that that guy does. I’m glad we’ll be able to lean on him and his expertise on the Pro Circuit and at all levels.”

TAYLOR TAKING ON A BROADER ROLE

Though his title hasn’t changed much, Taylor will fill a new and expanded role at FLW starting this season. As senior director of operations, he’ll work with all of FLW’s tournament directors to help with planning logistics, venue selection, angler recruitment and just about anything else that needs to be done to make sure tournaments are successful. He’ll also work with the FLW media staff to coordinate its needs for live on-the-water coverage.

Most importantly, he plans to spend a lot more time interacting with the anglers to make sure the FLW experience is the best in fishing, no matter what level an angler chooses to participate. Considering all that Taylor has experienced in his career, from fishing the first-ever Operation Bass (precursor to FLW) event in 1979, to joining the Bass Fishing League staff a decade later, helping to launch the FLW Tour in 1996, moving to full-time FLW Tour director in 2001 and ushering the FLW tournament department through every era from wrapped boats to the internet age, there’s no one better for that job.

“I’m excited about this new opportunity,” says Taylor. “I always get motivated when I get a chance to do something a little bit different. I’m looking forward to going to more Bass Fishing League tournaments. I’ll be able to talk to the grassroots anglers and get their thoughts about scheduling and the programs FLW offers. And I always love talking to our pros and helping them with whatever they need. Going forward, I’ll have the opportunity to apply more than 20 years of experience toward helping to grow all of FLW’s tournament circuits and to be involved with recruiting new anglers.” 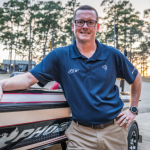