March 15, 2020 (Lake Fork, Texas) Major League Fishing Pros weathered a slower day on Lake Fork during the General Tire Stage Three presented by TrueTimber. Mark Daniels, Jr., who started the day with a 12-pound lead over the rest of the field, won Group A Qualifying Round and earned a berth to Wednesday’s Championship Round. Jeff Sprague and Jason Christie battled for second place throughout the day with Sprague edging out Christie in Period Three. 32-year-old Josh Bertrand began the day in 23rd place and caught 43 pounds, six ounces to rise to finish in 7th place. Anglers who finished in 2nd through 20th places will start-over in Tuesday’s Knockout Round when weights begin at zero in hopes to be among the top eight (out of 38) anglers to advance.

Coulter began today in second place after falling behind Michael Neal by one pound with only seven minutes left on the first day of the Qualifying Round. Catching 11 bass weighing 52 pounds, six ounces, Crockett Creek Pro Coulter led the field for much of the day finishing 10 pounds ahead of Atkins. He chose to fish offshore where he landed three fish over five pounds including one weighing eight pounds, one ounce. The 49-year-old father of four is looking forward to his day off during tomorrow’s Knockout Round. He looks forward to fishing the infamous Lake Athens on Wednesday against Mark Daniels Jr. and the top eight (field of 10) from Tuesday’s Knockout Round.

“I’m exhausted,” said Coulter as the Official called for lines out at the end of Period 3. “It was a really fun two days. I didn’t expect to do this in these two days and now I get to go directly to the Championship after rest tomorrow. I’m looking forward to seeing which eight guys make it to Athens, and then let’s go have a shootout on Athens!”

Justin Atkins finished second in Group B Qualifying Round after catching the second most weight in Day two with 47 pounds, one ounce with 20 fish, including an eight-pound-four-ounce largemouth during the first Period. His record 10-8 fish that he caught on Saturday currently retains the lead as the heaviest fish caught in both MLF and Bass Pro Tour histories.

Dustin Connell and Jordan Lee leapt up the leaderboard by 17 places each. Connell landed the biggest fish of the day weighing nine pounds even within 30 minutes of the competition start and caught a steady stream, including a seven-pound-eight-ounce bass throughout the morning before stalling out for much of the second and third periods. Connell ended with seventh place for the two-day Round with 64 pounds, 15 ounces. Berkley Pro, Jordan Lee began the day in 31st place and proceeded to advance in a slow climb up the leaderboard including when he caught a 6-15, which launched him into 11th place an secured his position in the Knockout Round.

“I had a great day,” said Lee. “Lake Fork has been kind of stingy; but overall I had a great comeback today and looking forward to tomorrow.”

Local Pro Kelly Jordon fought with his home lake much of the day only to fall from sixth after Day One to 24th today. After catching 45 pounds on Saturday, Jordon was only able to score three pounds, 10 ounces today.

“Doesn’t that just make you sick,” said Jordan as the Official called lines out. “I just couldn’t make anything happen today; my home lake got me.”

The competition continues Tuesday when 38 anglers return to the water for the Knockout Round. Weights reset to zero and the top eight weights for the day advance to Wednesday’s Championship Round. . Monday’s weather forecast shows slightly warmer temperatures and overcast with a high of 66. 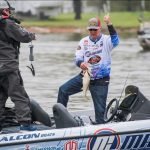