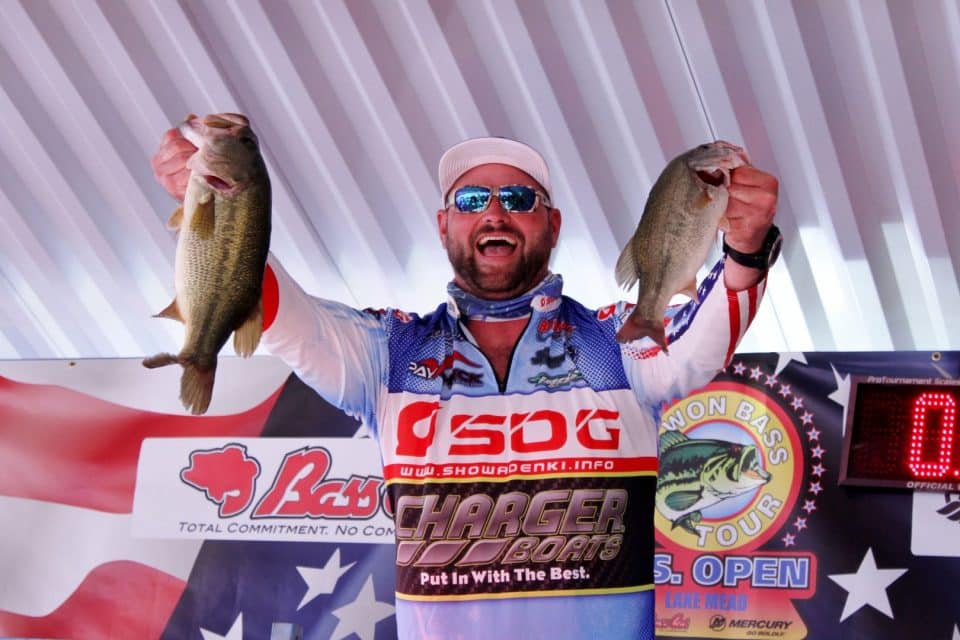 Las Vegas, Nev. – September 17, 2018 – When the first day of the 2018 WON Bass U.S. Open concluded, Jason Borofka’s 13.84 pounds held little more than a half pound lead over Bub Tosh’s 13.20 pounds.  With the first day having been cancelled due to extreme winds causing unsafe conditions, the shortened event became more of a shootout with the anglers competing for two days instead of three.

The stiff winds continued into the following day, and anglers found that they had to adjust to the conditions.  As can happen during bass fishing tournaments, the conditions made a complete 180-degree turn, and the final day brought high skies, light winds with very little surface disturbance.

While the conditions didn’t make for a typical power fishing bite, Tosh managed to ride a Double Soft Jerkbait rig in the Vegas Wash and produce enough quality bites to post an 11.74-pound limit to close out the victory in the weather shortened 2018 WON Bass U.S. Open presented by Bass Cat Boats and Mercury Marine with a two-day total weight of 24.94.

Tosh said he employed a method he learned from Lake Mead and Western bass fishing legend Pat Donoho when he was a kid.  “I talked to my dad when I came down here and he reminded me of how Pat prepared for this event, and that was to look for bait,” he said.  “I spent my whole practice period driving around and looking for clouds of baitfish; and I spent the whole tournament fishing in those few areas.”

He said he caught the primarily on a pair of Yamamoto D Shad soft jerkbaits in shad colors rigged on an 7’ medium heavy IRod AIR Series casting rod.  The key was a special swivel that he is developing for Paycheck Baits.  “The swivel helps me cast the rig without it getting me tangled, it is a very important part of the rig,” he said.  “I threw it around shallow grass and rocks in the Vegas Wash, and the current in the back of it was very important factor as well.”

Tosh takes home a 2018 Bass Cat Puma FTD powered by a Mercury 250ProXS rigged with Lowrance Electronics and MotorGuide Trolling Motor valued at $64,000 and $52,000 cash plus bonuses to bring his total earnings for the event to over $116,000.

Nick Salvucci, who has won on Lake Mead in the past, started day two in 11th place with 11.41 pounds, posted 12.89 to leap all the way to second place with 24.30; his second top five in a row.  Salvucci said that he caught his fish in the Overton Arm on bladed jigs and buzz baits.  But, he said that he was a little disappointed overall.  “I didn’t come here for another top five, I came here to win this event,” he said.  “I’m not happy with a second place finish, but I did all I could do, and this is how this sport goes.  I wish I could have done a little more, but I’ll take the finish and let it drive me for next year.”  Salvucci takes home $21,600 for his efforts.

The AAA Division was won by Oklahoma’s Matt Pangrac; who works for U.S. Open broadcast partner BASSZONE.com.  He practiced with fellow Soomer State pro Bradley Hallman, and drew Salvucci and Arizona’s Matt Shura, and thanked them all profusely.  “We all meshed really well and got into a rhythm,” he said.  “I had a great time, and learned a lot.  This is a great event, and because of my Pro partners and my boss Mark Jeffreys who allowed me the time to fish it, I was able to do something I would have never imagined; I can’t believe I won the U.S. Open.”  Pangrac earned $10,600 for his tournament.

Complete final standings can be found below.

That wraps up the 2018 WON Bass U.S. Open from Lake Mead.  The event was presented by Bass Cat Boats and Mercury Marine, and the live streaming broadcasts of the event were brought to you by Costa.