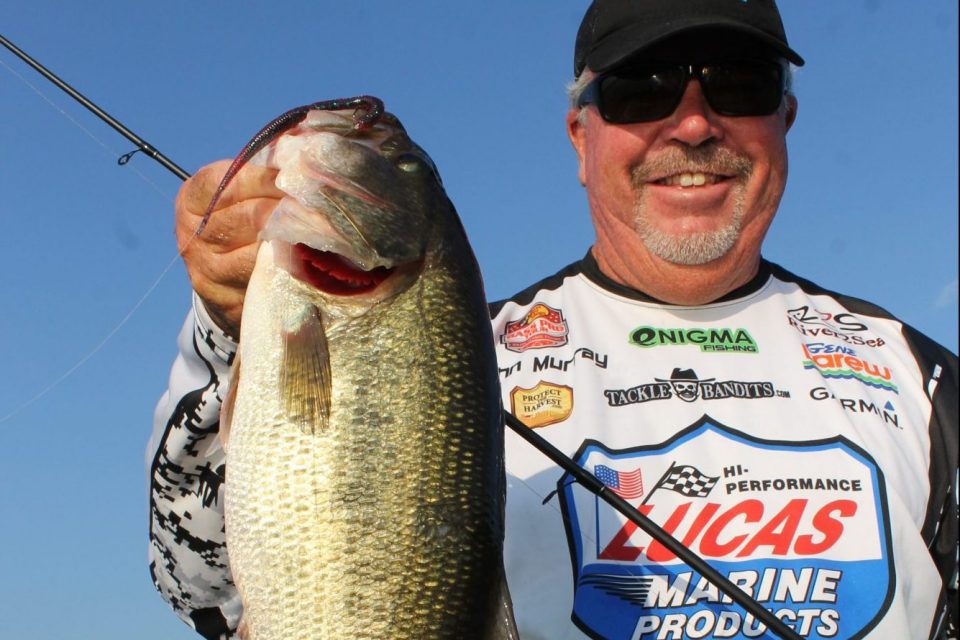 Autumn. What a glorious time to be on the water. A camo-clad army of would-be anglers has headed to the woods and many of us have turned more than a little of our time and attention to football. You have more water to yourself and the bass are crushing spinnerbaits, crankbaits and topwaters.

Let’s be honest for a moment. As an outdoors writer, I’m supposed to sell you on this grand scene where bass fishing amid the blazing tones of turning leaves is the most fun you can have with your clothes on.

But fall fishing can also be downright frustrating at times.

Let’s take a lesson from a pro who excels under conditions that challenge most of us. Originally from Arizona, Major League Fishing Pro John Murray has been getting his mail in East Tennessee for a couple of years now but he acquired his reputation, and his skills, as a talented finesse angler in the big desert lakes out West.

“Twelve months of the year, 24 hours a day, I’ve always got a dropshot rigged,” shares Murray. “Even on days that they’re eating the paint off a spinnerbait or something in the morning, sometimes by eleven o’clock you’re scratching.”

Murray’s go-to technique has produced in a variety of theatres. “I’ve won tournaments on Toledo Bend, the James River, different places, and the dropshot has been a key to those wins. It’s a great back up for when you have 3 good ones and just need 2 more. It’s always got a place in my fishing, especially in the fall because it’s so versatile I can catch them shallow or deep on it, depending how the fishing is going that day.”

Though it can be productive any time, Murray most often turns to the subtle tactic when the action slows. “In the fall, you usually have a feeding window, whether it’s in the early morning or maybe the afternoon, but then there are other times when they’re just not doing anything, but if you put a dropshot in their face, you’ll get a bite or two.

In a departure from the ‘video game’ technique used by many dropshoters, Murray seldom goes vertical with his worm in autumn. “Even out on deep structure, I’m usually casting and dragging it uphill. I really like an uphill drag in the fall. Even when grass fishing, I’ll make a long cast. I tend to use a light weight in grass and swim it a little more. It’s a real finesse-looking bait coming through the water. I will let it settle in any holes or along the edge of grass. There’s not as much vertical fishing in the fall as in the winter or summer.”

Murray will pick the low-hanging fruit with fast-moving lures before mopping up. “If I’m fishing way out on a piece of a ridge and they’re eating a crankbait out there and they’re killing it in the morning and then they stop, that dropshot is the first thing going back out there to catch those last few. That’s also a big deal in the grass. You find an outer edge that has some fish on it with a reaction bait and you can come through a second time throwing a dropshot and catch a couple more that you wouldn’t have caught on those reaction baits.”

Some days a dropshot is Murray’s primary choice from the beginning. “Two things really push me that way. One is a lot of sun – bright, bright weather where you’ve got good visibility and you just can’t fool them with the reaction baits.

“The other is a lack of wind. You get a real calm, sunny day, I’ll probably go to a dropshot a lot faster than if it’s a windy day or a cloudy day. Usually on those low visibility days I’ll stick with a reaction bait because you can fool them just as well with that, but calm, sunny – I’m going to pick that dropshot up pretty quick.”

While many of us ask what bait the bass are chasing in autumn, Murray looks inward for the answer. “I’m always a confidence guy. My confidence here on the Tennessee River is usually a redbug color. It’s got the green fleck and the red hue. It’s got the crawdad colors. It’s got the shininess for a shad.” (Who – besides John Murray – knew ‘shininess’ was a word?)

“I’m not that big on color changing my day. I feel like, if I have the right bait and present it correctly, I’m going to catch them.”

While Murray notes that Gene Larew makes great shad colors, he relies heavily on redbug and the Sooner Run color for most situations. He’s comfortable with that slim color selection and, given his experience, that’s saying a lot.

As for lure shape and size, “I’m pretty much a 6-inch Gene Larew Tattletail guy. That’s the worm I designed. It’s got a swimming tail. It’s not a paddle tail and it’s not a straight tail. It’s got a little vibration to it, a little movement to it but it’s subtle.

“I will upsize to the 8-inch sometimes if I’m out in deeper water, looking for a bigger fish. Sometimes I’ll pinch a couple inches off and get down to 4 inches if I’m fishing out West where I want a smaller profile bait, but a 6-inch Tattle Tail pretty much covers all my fishing year-round.”

“I like it weedless because I’ll throw it anywhere. I don’t want to have an open hook and then come across a brush pile and I can’t throw it in there. I’m using a little offset light wire Gamakatsu hook and Texas-rigging it 90% of the time.

“The biggest thing for me is length of leader. I’ve seen that make a huge difference. My general starting size is 8-to-10-inches of leader off the bottom. Now, sometimes when it’s cold or the water gets a little dingy I’ll lower that down to a 3-or-4-inch leader, just off the bottom, and sometimes when the water is clear I like a long leader like 2-and-3-feet off the bottom because those fish tend to roam a little more in that clear water. Usually 10 inches is a good start and if I feel anything is off, I’ll change my leader length a little bit; try a different one.”

When imparting action to his worm, Murray is a drag. “I’m pulling it with a steady pull. I’m not a real big shaker. I don’t usually shake the rod tip. The only exception would be if there are spotted bass. I will shake the rod tip more then, but for largemouth or smallmouth I just like a steady drag. I just want that thing swimming like a minnow would, just swimming through. If it’s warmer I might start swimming it longer, might start reeling it slow, but if there’s any sort of fall weather I’ll probably let it settle. Just settle. Sometimes I’ll dead stick it and then pick it up again and drag it.”

The dragging action is a reason Murray likes to work uphill. “You’ve got that bottom contact. You can feel ‘oh, I’m coming into rocks now. I should get bit’ type of deal.”

Murray achieves that bottom contact with anything from a 3/16 to a 1/2 oz. tungsten weight, the heavy sinker generally getting the call in 40-plus feet of water. “If I’m throwing into shallow grass, I’m throwing a 3/16 or maybe even 1/8 ounce sometimes. A quarter ounce will cover most things. If a guy just wanted to have one dropshot weight, a quarter ounce would cover it.

“I use an 8-pound Gamma fluorocarbon leader. That’s a little heavy for where I grew up but here you need it because you can catch a 7-pounder any time on a dropshot.”

Murray attaches 5 feet of fluoro to 20-lb Gamma braid via a surgeon’s knot or a small swivel. He then ties the hook to the fluoro and forms his drop leader.

As stated, he will fish heavy cover with this finesse tactic, so his rod choice matches accordingly. “I use a 7’1” Enigma rod with a 3000-size spinning reel on it. Just a simple Enigma rod but I’ll use a medium action to medium-heavy rod. You see a lot of guys dropshoting with willow branches – real wimpy rods. I don’t want to. I use those for crappie rods. I’m fishing Texas-rigged most of the time, so I do want to have some power. I’m not setting the hook like you would with a Texas rig, but I’m reeling and pulling in and you want a rod with some stoutness to get that hookset.”

Deep water, where hooksets are more challenging on light line, and cold water may cause Murray to use an open hook on the nose of his worm. Otherwise, it’s the Texas rig, and not just for its weedless ways. “Fall time, I’ll almost never have an open hook. It’s more about boating fish. Sometimes those open hooks get every fish and sometimes you lose half of them – like, every big smallmouth you hook on them. A little, light Texas rig hook, you’ve got ‘em; you’ve got them pinned and they’re coming in the boat.”

Enjoy those fall feeding blitzes with fast lures but when the bite slows down, do the same and put John Murray’s tips to good use. 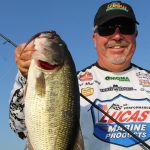