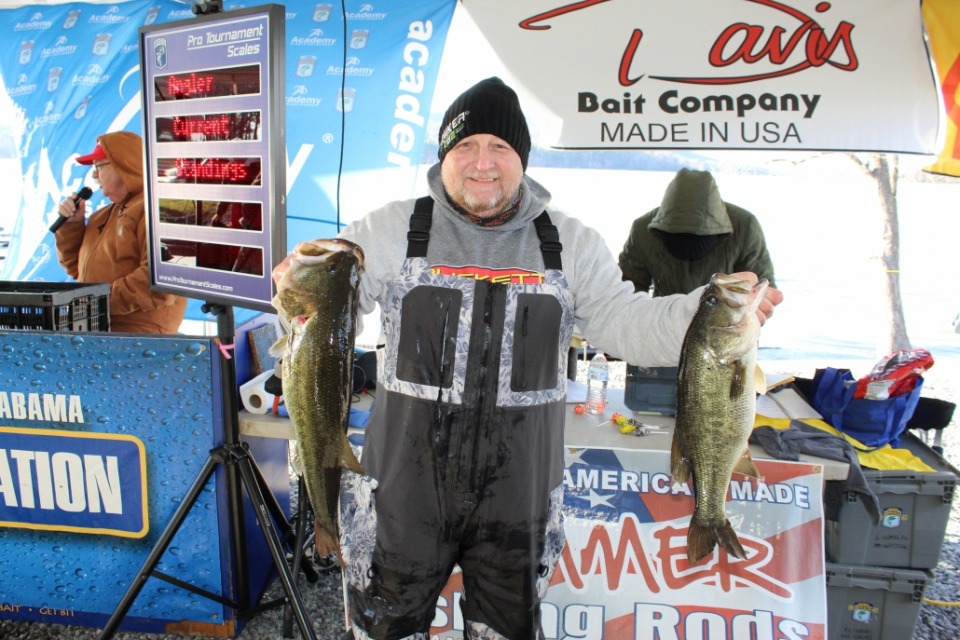 As usual, select ABN fishermen didn’t let a little adversity detract from their opportunities to catch fish. Talladega angler Chester “Jabo” Bowman, in fact, said he consistently caught keepers all day long, including a couple of late culls that allowed him to overtake the early leaders in the tournament.

When he finished the brutal day of fishing, Bowman (Shotgun Sports Supply) weighed 20.46 lbs. of Guntersville bass, including a 6.34 largemouth, and bested a field of 63 boaters in the event staged out of Goose Pond near Scottsboro. He finished almost exactly a pound ahead of second-place boater Ryan Walters (Lake Guntersville Bassmasters), who brought in a 19.45 limit.

Beard boated the Academy Sports + Outdoors Big Fish with a 7.18 largemouth. He caught the fish on a bladed jig.

Cold temperatures and pre-dawn snow made conditions miserable before launch, and a snow/rain mix lingered into the mid-morning hours. Although the skies cleared later in the day, winds built and contributed to the difficult fishing conditions. Despite the extreme weather, combined with high, muddy water from rain and snow from the days leading up to the tournament, the bass bit well for some anglers in the opening stages of the tournament. That bite fizzled for some when the precipitation quit while others said that a hint of sun about mid-morning triggered a short feeding period.
Bowman, however, said he caught at least a dozen keepers during the course of the day. He boxed a good limit early, including a four-pounder on the second cast, on a Bill Lewis squarebill near the mouth of Seibold Creek. He continued to pound his main area in Seibold, located in the mid-lake area west of Scottsboro, and made several key culls late.

“I didn’t really know what I had,”

“I thought maybe 17 or 18 pounds. But they weighed a little heavy. They were in really good shape.”

The game-changer came at about 1:30, when he enticed his big fish to hit a homemade vibrating jig. The bass struck on a short line near the boat, but Bowman managed to keep it hooked up. The catch culled a keeper from his earlier limit, and Bowman upgraded with another key bass on the same lure not long before making the run back to Scottsboro.

“It’s got a little wider wobble that the fish seem to like.”

Walters, the second-place finisher, said he did most of his damage before noon, particularly in the mid-morning feeding period.

“It was a tough day, especially in the snow earlier,”

said Walters, a Huntsville resident who was fishing his first ABN event.

“When it started sprinkling rain about 8:30, it seemed to turn the fish on. That’s when I did most of my damage.”

Walters caught his first fish on an outer grass line in the mid-lake area. He said the bass seemed to move shallower through the morning but then disappeared on him for the rest of the day. He caught all of his limit on a bladed jig.

Edmonds, fishing with fellow Carbon Hill Bass Club member Jim Nelder, said he caught his three-fish limit “on a moving bait” in a “mid-lake area about three miles down the river.” He later told ABN president Eddie Plemons during the awards ceremony that he caught the fish on a Rat-L-Trap lipless crankbait. His biggest largemouth weighed 4.66.

Other winners at the Guntersville event included Dees and Jones, who took the team title. Their combined weight of 20.32 lbs. topped the field of registered team competitors.

In addition to individual boater and co-angler competition, the ABN allows anglers to pair up with the top teams earning spots at the year-end state championship. The top five team finishers from each qualifying tournament will be eligible for the state championship, scheduled for Nov. 6-7 on Lake Eufaula. Last year, the top four teams out of the state championship on Lake Guntersville advanced to the Toyota Bonus Bucks Team Championship held on Lake Hartwell, S.C.

The teams of Glasgow and McCain Merchant (Winfield Bassmasters) and Beard and Chris Curvin (Neely Henry Bassmasters) tied for second with 18.53 with that total all coming from the boaters. Other team qualifiers were Bragg and Burt Lancaster (Wiregrass Bassmasters) and Nelder and Edmonds.
A final winner came from the Fishin’ 4 A Cure (F4AC) participants. Davis finished as the top finisher among those signed up for F4AC. Competitors pay an optional $25 per tournament to F4AC, and the money goes to help combat childhood diseases at Children’s of Alabama in Birmingham. Airport Marine and Office Partners are the F4AC sponsors.

The ABN heads to Lake Eufaula for its March qualifier with others to follow at Lake Martin in April and Lake Neely Henry in May. Top individuals and teams compete to earn a spot in November’s state championship. Qualifiers are open to any member of a B.A.S.S. affiliated club. The full schedule and registration information is found on the ABN website.

More Tournament Photos can be found at https://flic.kr/s/aHsmLhYxgt

Greg McCain is a freelance writer with hundreds of credits in various print and digital publications. In addition to producing photos and content for this website, he is a regular contributor to Alabama Outdoor News (AON) magazine and CrappieNow digital magazine. He is a member of the Belgreen Bass Club, an ABN chapter near Russellville.