DAYTON, Tenn. (April 12, 2019) – At the end of four rounds of competition in the Major League Fishing® (MLF) Bass Pro Tour Econo Lodge Stage Four Presented by Winn Grips, we’re all done asking “Just how good is Lake Chickamauga?” The answer is best expressed in numbers: 105-6; 11 over 80; 748; 1,400.
Zack Birge ended Elimination Round 2 on Friday with 105 pounds, 6 ounces of combined weight from his two rounds, a new Bass Pro Tour record. Eleven anglers competing today in Group B had two-day totals over 80 pounds. And the 40-man field put 748 bass on SCORETRACKER™ for 1,400 pounds.
Birge Blisters the Elimination Record
Birge became the first competitor in Bass Pro Tour history to break the 100-pound mark in Elimination Round competition, connecting with 28 Tennessee River largemouth for 54-2 on the day, building his two-day Shotgun/Elimination total to a record 105-6. The Oklahoma pro maintained a steady pace with a vibrating jig with a Googan Baits Krackin Craw trailer from the moment lines went in, weighing nine fish in Period 1, six in Period 2, and then adding 13 fish for 22-2 in the final period.
“Once I got to where I thought 100 pounds was attainable, I really wanted to break that 100-pound mark,” Birge admitted. “I’m excited to go right back out and fish again, I feel like I can go catch a bunch of them. I haven’t even gone to a dozen places I found in practice that set up the same way as what I fished today.”
Top 11 All Over 80 Pounds
Local pro Andy Morgan was matter-of-fact about his 31-pound performance in the Shotgun Round, which brought him into competition on Friday in 21st place (“Middle-of-the-road at best,” Morgan said). But Morgan was one of the anglers who got busy early on Chickamauga, putting 18 fish on SCORETRACKER™ for 47-14 in the first two periods and finishing with 56-13 to bring his two-day total to 88-5.
Davis, Powroznik and Roumbanis did even better. Davis piled up 64-15 on the day, Powroznik added 60-14 on 32 fish, and Roumbanis boosted his two-day total with 58-11. Those three were part of an 11-angler group that finished the Elimination Round with 80-plus pounds.
“This is by far the best day I’ve had on the Bass Pro Tour,” Roumbanis said. “I’m starting to get the confidence of running around and fishing the entire day instead of period to period. That has helped me to fish more free and not get locked in on one certain deal. I probably had 15 rods on my deck today and moved through a bunch of them with confidence.”
Weights Back to Zero for Knockout Round
One thing that we’ve learned this week on Lake Chickamauga is that any standard that was set in the previous three stages of the 2019 Bass Pro Tour season is moot. It took 49 pounds to win the Knockout Rounds at both Kissimmee (Florida) and Raleigh (North Carolina), and 38 pounds for Boyd Duckett to claim the top knockout spot on Lake Conroe (Texas).
So far, there have been 15 single-day weights of 49 pounds or better recorded on SCORETRACKER this week on Chickamauga, and the two-day Shotgun/Elimination weight record has been broken two days in a row.
“I keep waiting for the weights to fall off at some point, but we just keep catching them better and better,” said Fletcher Shryock, who racked up 86-7 in two rounds. “We’re catching the numbers, but what this fishery hasn’t showcased yet is the big ones. We’re catching this much weight and we’re still not seeing the 8s, 9s and 10s. I guess that’s the quote of the day: Lake Chickamauga is fishing really good, but could be ever better. And that’s insane.”
When, Where & How to Watch
Competition begins Saturday at 7:30 a.m. ET, with live, official scoring available via SCORETRACKER on MajorLeagueFishing.com and on the MLF app. The MLF NOW! Live Stream starts at 10 a.m. ET, with live, on-the-water coverage and analysis provided by Chad McKee, JT Kenney, Marty Stone and Natalie Dillon until lines out at 3:30 p.m. The Berkley Postgame Show – hosted by Steven “Lurch” Scott – will start at 5 p.m. daily.

To see all results from the Elimination Round, and to keep up with cumulative results throughout the week, visit MajorLeagueFishing.com and click “Results.” 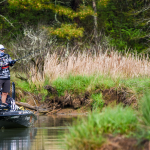