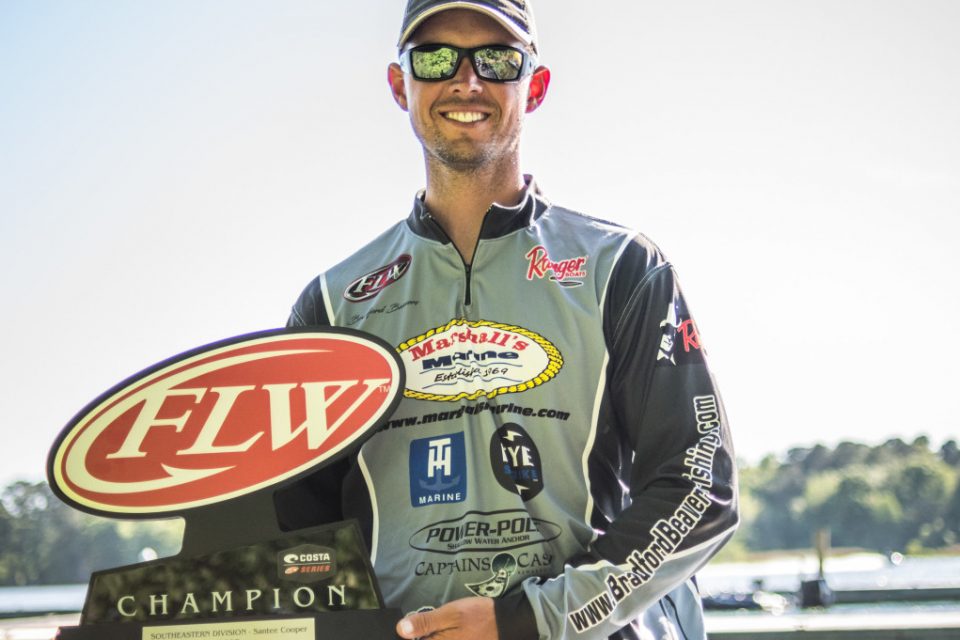 SUMMERTON, S.C. (April 27, 2019) – Pro Bradford Beavers of Summerville, South Carolina, caught a five-bass limit weighing 23 pounds, 7 ounces, to win the weather-shortened Costa FLW Series on Santee Cooper Lakes presented by Power-Pole. The tournament was shortened from three days to two after competition was cancelled Friday due to high winds. Bradford’s two-day total of 10 bass weighing 54 pounds, 9 ounces, was enough to earn him the victory at the Southeastern Division finale and $86,700, including a new Ranger Z518L boat with a 200-horsepower Evinrude or Mercury outboard.

“To win on my home lake is quite an accomplishment,” said Beavers, who won the Costa FLW Series Championship on Kentucky Lake in 2017. “I know how good the anglers are here, and it’s a little redemption for the 2014 [FLW Series] event here. I started that final day in second place, but zeroed and ended up finishing ninth. That’s been on my mind for years, so this is great.”

“I started at the best cypress trees I knew of, where the bass were either spawning or coming off the bank,” said Beavers. “I had four areas of trees that I fished there.”

Beavers said that he headed to Lake Marion around 1 p.m. each day, running pretty much ran the same pattern in two general areas, but with one small adjustment.

“I fished even shallower trees on Lake Marion because I felt more [bass] were truly spawning on the upper lake versus Lake Moultrie, so I’d hit trees more in the pocket rather than out in the open,” said Beavers.

The South Carolina pro said he caught seven keepers Thursday and added another nine today. He weighed nearly every fish from a wacky- or Texas-rigged, 5-inch green-pumpkin Yamamoto Senko. One keeper each day came on an Eye Strike Texas Eye jighead with a 3.3-inch shad-colored Keitech swimbait.

“The Eye Strike is like a wobble head with an eye protruding from it. I’d throw it the first 30 minutes because I felt there was a shad spawn going on.”

A complete list of results will be posted at FLWFishing.com.

Watson weighed a 9-pound bass Saturday – the heaviest of the tournament in the Pro Division and earned the day’s Boater Big Bass award of $300.

Rodney Tapp of North Augusta, South Carolina, won the Co-angler Division with a two-day total catch of 10 bass weighing 32 pounds, 10 ounces. For his win, Tapp took home a prize package including a Ranger Z175 with a 115-horsepower outboard motor.

Jamie Booth of Erin, Tennessee, caught the biggest bass of the tournament in the Co-angler Division Friday, a fish weighing 7 pounds, 7 ounces. Booth earned the day’s Co-angler Big Bass award of $200 for his catch. 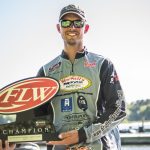