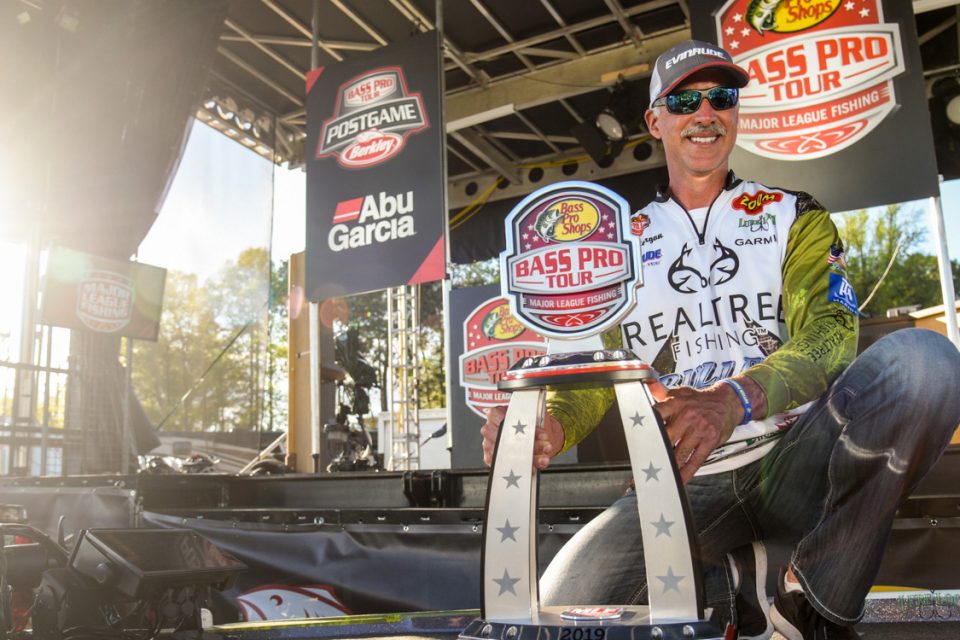 DAYTON, Tenn. (April 14, 2019) – From the moment he announced his intention to compete on the Major League Fishing® (MLF) Bass Pro Tour, Tennessee pro Andy Morgan was tabbed by his fellow competitors as an angler to watch. Based on both his exceptional 23-year career and his catch-every-fish-that-swims fishing style, Morgan came into the season as a near-universal pick by his contemporaries to take home one of the eight regular-season Bass Pro Tour trophies.
It turns out that Morgan’s first Bass Pro Tour trophy didn’t have far to travel: 7.1 miles from Lake Chickamauga to the trophy room in his home in Dayton.
Fishing a lake that he grew up on – and finishing the day in a pocket that he and his dad have won “a number of April tournaments in over the years” – Morgan weighed in 34 Lake Chickamauga largemouth for 80-0 pounds to run away with the Championship Round of the Econo Lodge Stage Four presented by Winn Grips.
“I wanted to win one more tournament on Chickamauga,” Morgan admitted. “I can’t explain how hard it is to win an event at this level, and I can’t explain just how bad I wanted to win right here in front of my family and friends – I wanted it bad. It means the world to me to be able to come out here on this lake where I won my first tournament when I was 15, fish against this bunch of guys, and get that trophy. I’m awful proud of it.”
Jared Lintner finished second with 60-7, Todd Faircloth was third with 59-5, Jacob Powroznik was fourth with 54-4 and Mike Iaconelli completed the Top 5 with 54-2.

Morgan Committed to One Spot Early
Morgan fished Championship Sunday as one would expect a seasoned veteran to work his home fishery, committing his entire championship round to a long backwater north of Dayton that locals refer to as “The Branch”. Morgan woke up on Championship Sunday, looked at the weather forecast calling for heavy morning rain and afternoon winds, and knew immediately that he had an outstanding chance for a big day in two sloughs inside “The Branch”.
“As soon as I saw the weather, I knew that I wasn’t going to leave that area all day,” Morgan confirmed. “I was going to fish it all day long and figure it out, because I thought it had the best population of fish to work on. I knew it could all go down right in those two sloughs, and that I needed to just stay put and be patient.”
Morgan’s patience paid off. The Favorite Fishing pro worked his way around two areas he refers to as “Back Slough” and “Bus Slough” with a jig and Zoom Super Salt Plus Z Craw, a lipless crankbait and a vibrating jig, picking up 11 fish apiece in the first and second periods to claim and hold a 7-1 lead heading into the final period.
Jared Lintner, who spent a good part of his day sight fishing, had crept to within 2 pounds of Morgan midway through Period 2 and had located one spawner that he identified as “a double-digit fish.” But while Lintner added 11 fish to his SCORETRACKER™ total through the final 2 ½ hours of competition, eight of those were under 2 pounds; Morgan, meanwhile, connected with his two biggest fish of the day – a 5-7 and a 6-9 – and a 4-4 to gradually open up his lead.
“I had no other competitors in my area and the weather kept the local traffic out, so I had the whole place to myself,” Morgan said. “I’ve had some pretty special days on Chickamauga – I won my first Angler of the Year title on this lake – but today was the one day in my whole career where the deck was stacked for me to win.”
Morgan finished the week with 224-8, a record for weight caught in a Bass Pro Tour event. He and Lintner’s 106 fish caught is also a record.
Lintner Made a Run at It
Lintner made things interesting through the first two periods, catching solid numbers of 1- to 3-pound males in an area in Soddy Creek that had been fished heavily throughout the week. The Aftco pro made a serious run at Morgan’s lead in the second period with a series of 3-pounders, but ultimately couldn’t convince a couple of big females to bite.
“I didn’t know if that area would replenish, or if the ones that were in there would bite again, but the winning fish were in that area,” Lintner said. “I saw a couple of fresh big ones that I thought were going to go, but they just weren’t ready to bite.”
Bass Pro Tour Stage Four By the Numbers
Total Weight                     7,415 pounds, 9 ounces
Total Fish                         3,829 fish
5-plus pounds                  74 fish
6-plus pounds                  36 fish
7-plus pounds                  17 fish
Records Broken
Total Event Weight            7,415 pounds, 9 ounces
Total Event Fish Caught    3,829
Most Overall Weight          224 pounds, 8 (Andy Morgan)
Most Fish Caught              106 (Jared Lintner & Andy Morgan)
Two-Day Weight                105 pounds, 6 ounces (Zack Birge) 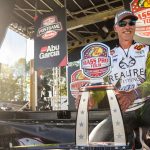