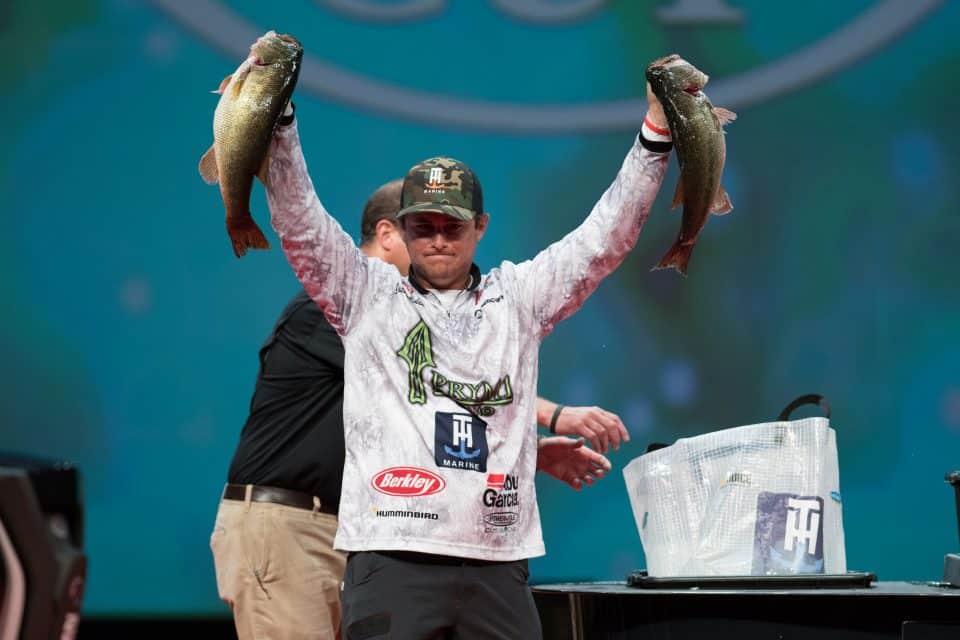 Link to HD video of Atkins Weighing in On-stage

COLUMBIA, S.C. (Aug. 11, 2017) – The world’s best bass anglers convened on Lake Murray in Columbia, South Carolina, Thursday to kick off the 2017 Forrest Wood Cup, the world championship of professional bass fishing. The three-day event, which awards a $300,000 top prize to the victor, featured a full field of 53 anglers competing today and Saturday before being cut to the final 10 on championship Sunday.

“Today was really good,” said Atkins, who finished runner-up in the 2017 FLW Tour Rookie of the Year race. “I caught two real quick this morning, then finished out my limit by 7:40 (a.m.). Then I just started running areas from practice that looked like they would be productive and managed to catch a couple of good ones. Around 10:30 I caught a 5-pounder at a spot that I had saved, then I went to another place that I had found that was a little off of the wall and caught a 6-pounder on my first cast there.

“I didn’t want to burn through a bunch of 3½-pounders that could help me later, so I spent the afternoon graphing and looking for more areas, just getting ready for tomorrow.”

Atkins said that he fished just one bait throughout the entire day. Although he withheld specifics, he did say that it was a topwater bait and that he caught 20 to 25 fish throughout the day.

“I’m comfortable catching them on a worm or a few other baits here if I need to, but it was one bait all day, today,” Atkins said. “I’m fishing more of a pattern rather than certain areas or spots.

“I thought I’d catch around 17 pounds, which would have been a good Day One goal,” Atkins continued. “I definitely didn’t think I’d catch more than 20. The lake is fishing a lot better than it has in years past. I’m not planning on doing anything different tomorrow, I’m going to do the same thing and hopefully will have similar results.”

The top 20 pros after Day One on Lake Murray are:

Anglers will take off from Dreher Island State Park located at 3677 State Park Road in Prosperity, at 7 a.m. EDT each morning at the Folger’s Morning Takeoff. Each day’s weigh-in will be held at the Colonial Life Arena located at 801 Lincoln St., in Columbia, beginning at 5 p.m. Backpacks and other large bags are prohibited at Colonial Life Arena, so fishing fans are encouraged to leave their belongings in their vehicle.

Fans will be treated to the FLW Expo at the Columbia Metropolitan Convention Center located at 1101 Lincoln St. in Columbia, each day from 10 a.m. to 4:30 p.m. prior to the weigh-ins. The Expo includes games, activities and giveaways provided by more than 40 FLW sponsors, the opportunity to shop the latest tackle and outdoor gear from more than 100 exhibitors, Ranger boat simulators, a casting pond and a trout pond for children, as well as the opportunity to meet and interact with top professional anglers, including Hank Parker, Jimmy Houston and Byron Velvick. FLW’s namesake Forrest L. Wood, the legendary founder of Ranger Boats, will also be greeting fans.

On Saturday and Sunday the first 500 children 14 and under in attendance at the Expo each day who are accompanied by an adult will receive a voucher to redeem for a free Kid Caster’s no-tangle, rod-and-reel combo courtesy of WLTX 19 after the evening’s weigh-in. Also on Sunday one lucky fishing fan will win a brand new Ranger Z521C bass boat with a 250-horsepower Evinrude outboard motor courtesy of 97.5 WCOS radio. The Ranger Boat giveaway is free to enter but the winner must be present at the conclusion of Sunday’s final weigh-in to win.

Also on Saturday and Sunday, FLW fans will be treated to the Bass & BBQ Festival in conjunction with the FLW Expo. FLW and the South Carolina BBQ Association have partnered to feature award-winning BBQ teams offering delicious fare to visitors at the Forrest Wood Cup Expo. A portion of all proceeds will be donated to local South Carolina charities.

Country music superstar Easton Corbin will perform a free concert on the weigh-in stage at Colonial Life Arena on Sunday starting at 4 p.m., prior to the final weigh-in. The concert is presented by 97.5 WCOS radio. With two No. 1 singles, multiple awards and nominations, plus performances on some of the biggest stages in the world, Mercury Nashville’s Corbin has made a lasting impression on the country music landscape. He is lauded for his traditional country sound, authentic lyrics and mastery of understatement. American Songwriter says, “Easton Corbin has one of those rare, glorious voices that was made – just made – for singing country music.”

The Folger’s Morning Takeoff, FLW Expo, Bass & BBQ event, live concert and weigh-ins are all free and open to the public. The event is hosted by the Capital City Lake Murray Country Regional Tourism Board.

Television coverage of the 2017 Forrest Wood Cup will premiere in high-definition (HD) on NBC Sports Network (NBCSN) Sept. 27 from Noon -1 p.m. EDT. The Emmy-nominated “FLW” television show airs on NBCSN, the Pursuit Channel and the World Fishing Network and is broadcast to more than 564 million households worldwide, making it the most widely distributed weekly outdoors-sports television show in the world. 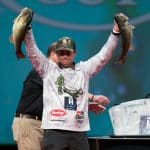