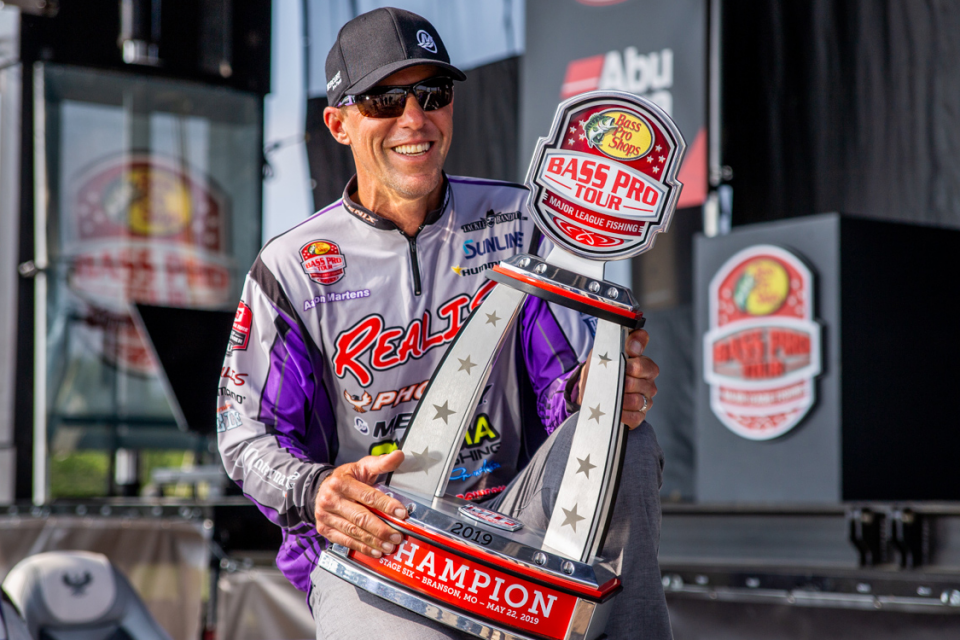 BRANSON, Mo. (May 22, 2019) – If you ask Major League Fishing® (MLF) pro Aaron Martens what his least-favorite technique is, he’ll giggle and tell you “Drop-shotting, bro.” It’s a running joke that the West Coast native has maintained for several years, claiming that he’d much rather be flipping a creature bait swimming jig, all the while racking up win after win using a technique he helped pioneer.
Martens can now add 100,000 more reasons to love the drop-shot.
Methodically plinking his way around a series of offshore brushpiles and flooded cedar trees in the main stem White River on Table Rock Lake, Martens connected with 50 fish for 86 pounds, 4 ounces, running away with the Championship Round of the Bass Pro Tour Berkley Stage Six Presented by TrueTimber and claiming a $100,000 paycheck (plus his first MLF championship trophy).
And he did it in true “A-Mart” fashion. While first-period leader Andy Montgomery watched his shad-spawn bite flame out in the second period, Martens kept a steady fish-catching pace from lines in to lines out, starting the morning connecting with multiple fish on a spinnerbait and swimbait between Moonshine Beach and Indian Point before picking up the drop-shot rod in the second period.
Martens stayed in the same area throughout the rest of the day, battling the wind and current while repeatedly dropping a Roboworm to fish he was seeing on his electronics and putting 34-14 on SCORETERACKER® in Period 1, adding 33-12 in Period 2 and holding on to the lead through the final period with 14 fish for 14-7.
“I spent my whole practice graphing,” Martens admitted. “I figured if I could find more waypoints and schools, that’s how I should spend my time. I knew every day the fish were going to change, but I had my graphs pretty dialed in where I can see fish in the trees, and see if they’re a bass, a white bass or shad. I know the bluff walls were a big deal, but I just felt better about what I had deeper.”
Montgomery Bet on Shad Spawn
Montgomery came out of the gate like he would run away with the trophy, thanks to the same morning shad spawn he had exploited all week long. Montgomery piled up 49-13 in the first period to open up a 15-pound lead on Martens and the rest of the field. But Period 2 proved to be the difference-maker of the day: Montgomery put only 8-11 on SCORETRACKER in 2 ½ hours, and could only keep working his docks as Martens overtook him with 30 minutes left in the period.
The South Carolina pro finally gave up on his dock pattern as the third period started, picking up a flipping stick and locating better-quality fish: five of his 10 fish in the final 2 ½ hours were 2 pounds or more, allowing Montgomery to stay within distant striking distance of Martens.
“There were a lot of signs that told me (I should’ve changed), but I just couldn’t quite pull the trigger soon enough,” Montgomery admitted. “I caught them so good (in the Knockout Round), but most of that was largemouth. Today, it was all spotted bass on those docks. I didn’t think that those largemouth could’ve moved out that fast, but I guess they did. I had a good third period flipping, but I wish I’d done it in the second period.”
Table Rock Showed Out
Although Table Rock is one of the most well-known tournament venues in the country, the six days of Bass Pro Tour competition showed this impoundment of the White River in a whole different – record breaking – light. Some of the most notable numbers from the week:
*    6,078 fish were put on SCORETRACKER
*    Total weight on SCORETRACKER for the field for the event was 9,815-2
*    Martens’ total weight for four rounds was a record 283-4
*    Cliff Pace weighed in a record 179 fish
Championship Notes
Martens’ victory is his 11th tour-level win. It’s also Martens’ first win in the MLF catch/weigh/immediate-release format.
Jeff Sprague took over the Points Championship lead with another strong event: Sprague has 417 points, followed by Edwin Evers with 414.
Stage Six Results
To see final results for Stage Six, visit MajorLeagueFishing.com and click “results.” 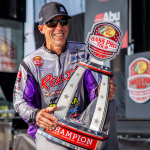